This content is taken from the The University of Melbourne , The Nossal Institute for Global Health & UNICEF's online course, Health Systems Strengthening. Join the course to learn more.
View course
4.10 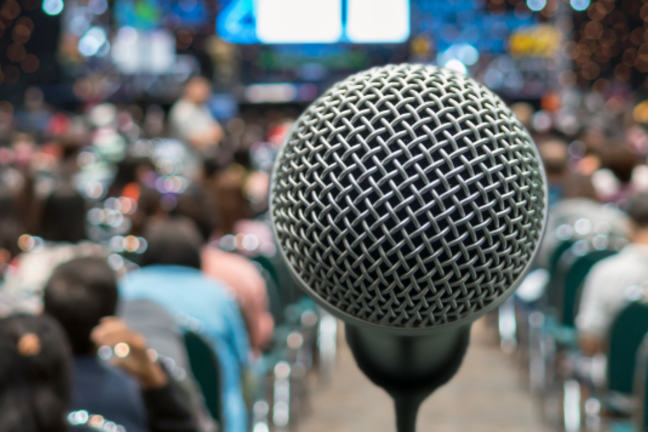 People seated in a conference wait to listen to a keynote speaker.

Take a moment now to watch the following speeches made on the government role in health care by two famous Americans, John F. Kennedy and Milton Friedman, during the 1960 - 70s.

You will easily recognise the sorts of arguments they make. These arguments are based on a high-income country context and represent opposing views. We present them here to illustrate the nature of the debate on the role of government in healthcare; for a large role of government, and against it. These views (and debates) are reflected today in many low- and middle-income countries.

If you are unable to access these videos hosted by YouTube, a summary of the speakers’ arguments is provided in this article, but if you can access them, it is worth hearing these two influential actors in the history of health policy make their case.

John F. Kennedy was the President of the United States of America from 1961-63. He was a Democrat and moved to cut tax rates, increase minimum wages, expand unemployment benefits, and expand social security. In this speech he was making the case for a reform that would introduce government-funded national health insurance coverage for the elderly. In 1965 President Lyndon B. Johnson finally signed into law the bill that led to Medicare and Medicaid, which provided coverage for most Americans aged 65 or older, and the poor.

In this video he argues that privately-funded healthcare may be unaffordable or leave patients in debt, while government-funded healthcare ensures better health outcomes across the population - drawing a comparison between health indicators in the United States and those in European countries with some form of national health insurance.

Milton Friedman was a professor at the University of Chicago who won the Nobel Prize for economics in 1976. He served as economic advisor to conservative leaders such as U.S. President Ronald Reagan and British Prime Minister Margaret Thatcher. He was supportive of the state provision of some public goods (like some small aspects of health care), when private business is not willing to provide it. He argued that many of the services performed by government could be performed better by the private sector and in the 1960s became the main advocate opposing government social welfare policies that had been in place since the 1930s. His political philosophy extolled the virtues of a free market economic system with minimal government intervention.

In this video he argues that health systems become underfunded once funding is taken over by governments; and that government health systems are inefficient, bureaucratic and provide poor quality care. He is also concerned that these systems reduce the freedom of choice of both patients and health professionals by dictating how care is provided and by whom.

After watching the videos, please respond to the following question in the comments below:

The Alma Ata Declaration (and most other international accords on health systems) assume that governments should be heavily involved in healthcare. What do you think are the main policy reasons for arguing that the government must play a large role in the health sector? (if you are having difficulty answering this question, please go back to the video in step 4.8).

© The Nossal Institute for Global Health at the University of Melbourne.

The University of Melbourne & The Nossal Institute for Global Health
New

Analyse how differing capacities of health systems, governments and communities have shaped responses to and impacts of COVID-19.