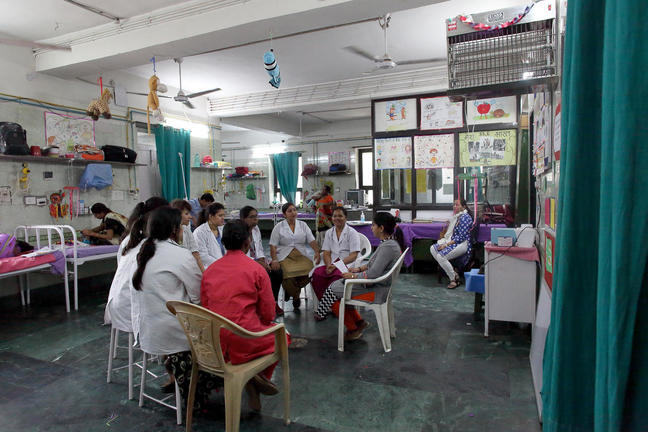 The character of the health workforce in many low-and-middle-income countries (LMICs) is currently poorly understood, and its diversity is poorly acknowledged by mainstream global and national policies. Sheikh and colleagues (2017) argue that this contributes to deficiencies and missed opportunities in how this workforce is managed and governed. They provide a framework of workforce diversity, and claim that it can help improve workforce governance. They illustrate different aspects of this framework with three case examples from different Asian countries, and conclude with a summary of learning and policy recommendations for other LMICs.

Research in human resources for health has described different dimensions by which health workers vary, however these have not previously been brought together conceptually. Sheikh and colleagues identify “multiple overlapping dimensions” of health workforce diversity and map them conceptually. These four dimensions (as shown in the image below) are: 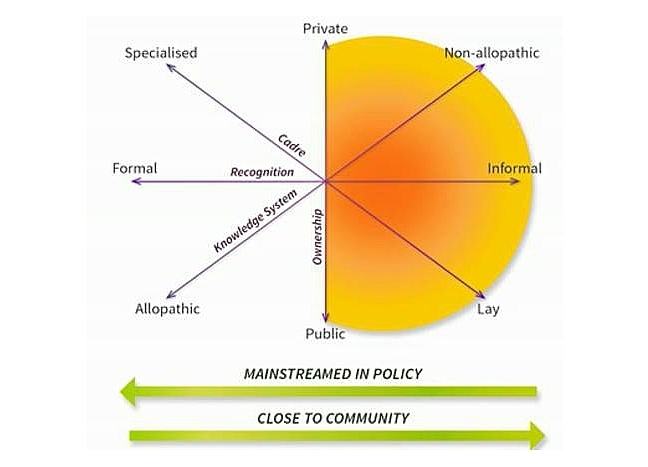 While the framework is useful in describing the heterogeneity of health workers, the authors also highlight the fluidity of the categories – a given healthcare provider may be usefully described through more than one descriptor, diversity along each dimension may be better understood as a continuum rather than a dichotomy, and health workers may transition across categories in the course of time. For example, a university-trained medical doctor may work in public or private sector jobs across their career or even at the same time; they may use some traditional/non-allopathic medicine with some or all of their patients; and may have informal qualifications or recognition in traditional medicine alongside their formal medical degree. Likewise, a volunteer community health worker with minimal training may become a formally-recognised, trained, nursing assistant employed in the private sector, but also keep their volunteer lay role.

This analysis also highlights that sections of the health workforce to the right of the figure, namely, lay, informal and traditional health workers, generally aren’t the focus of most health policy, yet these kinds of providers are often physically, socially and culturally closest to, and most embedded in, the communities most in need of services, and so are often in an advantageous position to have an impact on population health. This policy ‘blind spot’ may mean we miss opportunities to make large improvements in health in disadvantaged communities.

Another characteristic of health workforce diversity is what can be called “professional hierarchies”. We all know that hierarchies exist within different professions. This is often based on the extent of difficulty of training received by different cadres of health workers, and by the extent to which they are professionalised, or organised. These hierarchies have useful functions: to allocate different roles to different health care providers, ensure workers are trained and qualified to carry out these roles, and to promote efficiency in the health system. Professional hierarchy can, however, sometimes create power imbalances in the relationships between different cadres that are bad for health systems, and can affect their overall performance.

These hierarchies result in a phenomenon called professional dominance. Professional dominance as a sociological theory that was first put forward by Eliot Freidson (1970) in the context of the American health system. Freidson stated that since doctors control how their profession is organised, this allows them to control the production and utilisation of health knowledge. Ivan Illich (1977) made a similar but more radical set of propositions in his book, Medical Nemesis. He claimed that doctors have power over interpretation of illness, and the profession uses this power to perpetuate its interests. There are many studies that show how many of the professional organisations (such as medical or nursing associations) in low and middle income countries spend a lot of their time and energies in opposing reforms that reduce their control over health markets, and over the nature of their practises - even when these reforms might be better for the health system overall

Health systems are ultimately “human” systems, and hence they are shaped by complex political and social factors. Simple and effective solutions for HRH problems are limited, unless supported by reforms that recognise the complexity of the health workforce and tackle underlying issues of concern to them.

Questions to reflect upon:

1. Think about the nature of the health workforce in a health system that you have experience of. How does it correspond to the framework in this paper? Does the policy “blind spot” apply in the case of that health workforce?

2. Do you agree with the authors that “the formulation and implementation of health workforce policy needs to take into account the pluralistic nature of health systems, and acknowledge the de facto division of labour among the different segments?” What would be the alternative to this approach?