This content is taken from the The University of Warwick & Monash University's online course, Leadership for Healthcare Improvement and Innovation. Join the course to learn more.
View course
2.2

The comparative performance of health systems

Here we will look at the macro context of healthcare systems and how this may shape the nature and outcomes of healthcare improvement efforts.

As we saw last week healthcare systems around the world face big challenges and the demands for change are increasing rapidly. However, it is easy to forget that while these challenges are universal they are influenced by the unique character of each country’s health system which has developed over time.

One advantage of this ‘big picture’ view is that it helps us to understand how the institutions that surround healthcare delivery – types of funding and organisation - are often very robust and resilient to change. It also means that current attempts to reform healthcare systems and introduce new innovations are to a large extent mediated by the institutions and practices that are inherited from history. This is what economists and sociologists term path dependency – a situation where changes are incremental and follow pre-determined routes.

Another implication of this big picture view is that it highlights the risks of simply trying to copy or replicate innovations in the management of healthcare from one national context to another. While innovations that work in one healthcare system can deliver results, they may not have the same impact when they are implemented in another context. This is due to the prevailing culture, institutions and funding patterns that pose different challenges or obstacles.

To understand this bigger picture a useful starting point is simply to compare health systems in terms of their size. There are notable differences between countries in the total resources devoted to healthcare, usually expressed as a proportion of gross domestic product (GDP). While in some countries this is relatively low (e.g., China devoting 5.4% of GDP), in others healthcare absorbs more resources – notably the US where it accounts for a staggering 17.1% of GDP. Differences in size can also be linked to other metrics such as the number of hospital beds or staffing levels. For example, the employment of practising physicians per 1,000 population varies between 2.01 in China and 4.5 in Germany.

Comparisons are also frequently made of the performance of healthcare systems. The World Health Organisation (WHO), for example, publishes annual statistics comparing the performance of different health systems along with a number of dimensions, including life expectancy and mortality, selected infectious diseases, health service coverage, health inequities and demographic and socioeconomic statistics. Other agencies, such as the Commonwealth Fund, also compare health system performance, using a broader range of more qualitative indicators.

These rankings reveal interesting differences in performance between health systems, with better outcomes not always linked to the size of the resources devoted to healthcare. A notable example of this was a study published by the Commonwealth Fund in 2014 comparing 11 nations: Australia, Canada, France, Germany, the Netherlands, New Zealand, Norway, Sweden, Switzerland, the United Kingdom, and the United States. 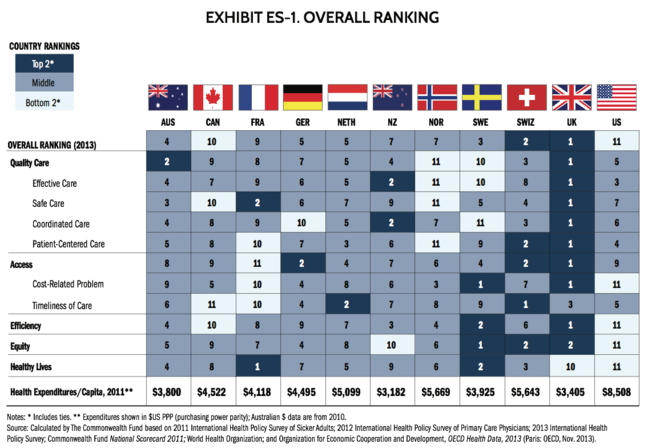 Interestingly this revealed that, despite being the most expensive (and well funded) healthcare system in the world, the US underperforms relative to other countries on most dimensions of performance and ranks last. The 2014 report included data on key outcomes relating to quality, access, efficiency, equity and healthy lives. It also incorporated patients’ and physicians’ survey results on care experiences.

Given the absence of universal health insurance coverage, not surprisingly, the US scored badly in terms of the accessibility of care and equity. It also ranked behind most countries on many measures of health outcomes, quality and efficiency. Interestingly, the UK was ranked first in the study on a range of indicators, despite having the lowest per capita health expenditure.

Although highly influential, Commonwealth reports have been criticised by studies using alternative metrics to compare performance. An example of this is a comparison published by the Euro Health Consumer Index, a Swedish based think tank. This ranks the UK NHS as a mid-table performer, largely because of poor direct access to hospital specialists (and services such as CT scans), relative to continental European countries that operate with social insurance systems. Controversially the 2015 report suggests that NHS systems (Beveridge) are possibly too large and increasingly impossible to manage. It suggests: “managing an organisation such as the English NHS, with close to 1.5 million staff, who also make management life difficult by having a professional agenda, which does not necessarily coincide with that of management/administration, would require absolutely world class management. It is doubtful whether public organisations offer the compensation and other incentives required to recruit those managers.”

Get a global perspective on occupational health and safety and learn how it reduces workplace injury on this CPD-certified course.