This content is taken from the The University of Warwick & Monash University's online course, Leadership for Healthcare Improvement and Innovation. Join the course to learn more.
View course
2.7

Frameworks for understanding the organisational structure of health systems

In this step we move from the big picture of different health system types to the question of how services (primary and secondary) are structured and configured.

This is an area where there has been very significant change in recent years and governments (and other stakeholders) struggle to agree on the optimal way in which services should be organised. In some national contexts, such as the UK, this has led to successive waves of re-organisation and experimentation depending on the political climate. Although the impact of these large scale re-organisations of services is hard to assess, there can be little doubt that they have significant consequences for the ability of clinicians and managers to engage in healthcare improvement policies locally. Such change involves disruption and uncertainty which can sometimes undermine efforts to change things or embed new innovations. As such, in the following sections, we will introduce a number of concepts to understand the organisational architecture of healthcare systems and how this might be changing.

One way of making sense of these issues is to draw on ideas from organisation theory. This sets out a framework for understanding what are sometimes termed ‘modes of governance’, or ways in which the production and provision of goods and services might be co-ordinated. Specifically, it sets out three ideal types: hierarchy (or bureaucracy), markets and networks. These general modes of coordination (or governance) can exist separately, although in practice are often combined or overlap in complex ways. 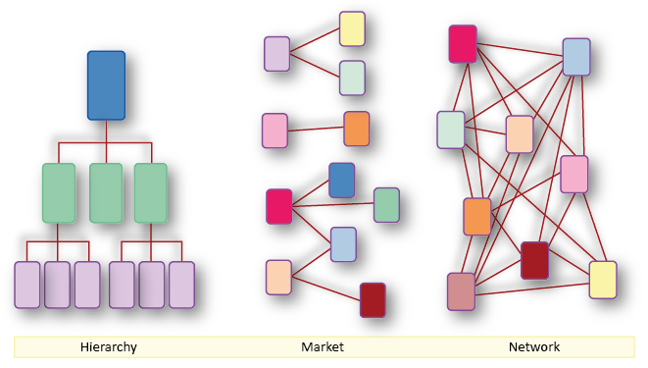 In a hierarchy or bureaucracy, different activities in a value chain – for example, those associated with primary and secondary care in a health service – are combined in the same organisation. Sometimes this process is referred to as vertical integration, a process whereby large companies involved in a similar market sector acquire activities involved in the supply of raw materials (backward integration) or distribution and sales (forward integration). Under this arrangement, the main way of coordinating activities is through a hierarchy or chain of command based on a formal authority structure which allows managers (in theory at least) to direct and plan operations. It may also be associated with attempts to standardise processes of production or service delivery to achieve economies of scale and the use of employment contracts to generate loyalty and common purpose.

By contrast, a market exists where all of the organisations involved in a value chain or sector are legally independent and separate with no long-term attachments (sometimes referred to as vertical disaggregation). As in any market, these companies buy and sell from each other, with the nature and volume of trade linked to supply and demand and the level of prices set. The advantage of this model is that it provides greater flexibility than hierarchies and also the possibility that competition will, in some situations, help to improve efficiency. However, the risk of an open market is that coordination becomes harder to achieve and relies heavily on legal contracts between buyers and sellers. As we shall see, this becomes a problem when services are very complicated (as in healthcare) and where elaborate and cumbersome forms of contracts are required to coordinate with the work of different organisations. In this situation, what economists term ‘transaction costs’ (the expense devoted to writing and monitoring contracts) may outweigh efficiency gains from competition. This situation may also be harder to plan or achieve common purpose, leading to fragmentation of services and duplication of effort.

Because of these risks of open markets, it is argued that inter-organisational networks may offer a viable, alternative means of co-ordination which also avoids the costs and rigidity of hierarchies. On paper, a network structure may look like a market, with organisations retaining their formal independence and autonomy. The difference is that, in a network, organisations involved in a value chain engage with each other for longer periods and invest in relationships that are based on trust and risk sharing. This can reduce the need for formal contracts and monitoring and therefore the risks associated with higher transactions costs. Examples of this model include craft industries (such as construction, publishing, film and the media) or regional economies, consortia and industrial districts where there is extensive pooling of resources (such as research, training and investment). The advantage of networks is that they may be more effective at coordinating the organisation of complex services, achieving some of the flexibility of markets without the rigidity of a hierarchy. However, the risk is that networks, which rely heavily on reciprocal trust relationships between participants are hard to establish and sustain over time.