This content is taken from the Trinity College Dublin's online course, The History of the Book in the Early Modern Period: 1450 to 1800. Join the course to learn more.
View course
2.6

Although we should not judge a book by its cover, it is very easy to do exactly that with the modern books we see in bookshops and libraries today. Today, book covers are highly attractive. In the early modern period, when books were often sold without covers, or with relatively simple bindings, the title page did a lot more work.

The title page is one of several kinds of “paratext” – a paratext is a text that exists in parallel to, or alongside, the main text within a book. Many books contain publisher’s advertisements, lists of an author’s other works in print, blurbs, and plot summaries all bound up together. Some paratexts don’t seem to have very much to do with the main elements of the book but others – especially the title page – serve an important function.

The title page gives us vital information about a book: it tells us the name of the text, and the name of the author, as well as when and where it was published. The title page introduces the text that is to follow and may also help to set up our expectations of that text, providing clues as to what sort of story it is, or what sort of person wrote it. It may be highly decorative, with a floriated or geometrical border, giving a hint of something fanciful. It may be plain and forthright, suggesting that what follows is to be taken seriously.

Like other parts of books, title pages go through fashions and if we look at the title pages of some of the many editions of Jonathan Swift’s Travels Into Several Remote Nations of the World. In Four Parts. By Lemuel Gulliver. First a Surgeon, and Then a Captain of Several Ships we can see just how much variation there is among them. Even the title changes as time goes on and we now more commonly call the book Gulliver’s Travels.

In this example, we can see how the title page provides a space for the publisher to advertise their work, and to proclaim their part in producing the book. 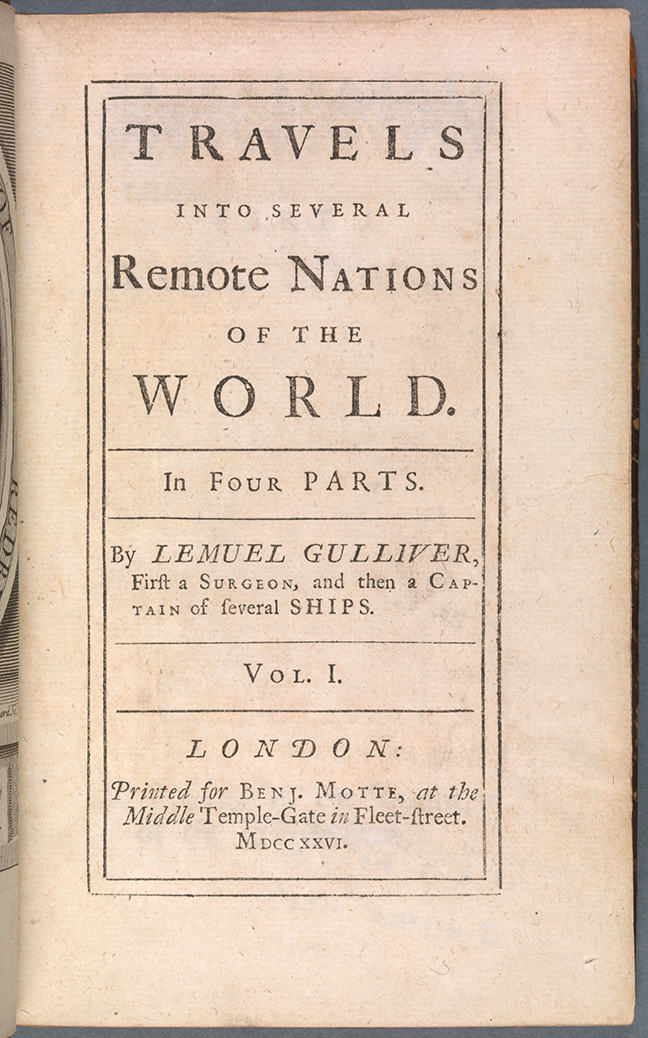 The following 1726 edition of Travels printed by John Hyde (d. 1728), in Dublin, uses the title page as a space to snub the original publishers noting, “in this impression, several errors in the London edition are corrected.” The original publisher – Benjamin Motte (1693–1738) – had made some changes to Swift’s work as he was afraid of possible legal action by people Swift (1667–1745) had parodied in his story. Hyde may not have actually corrected all of these “errors” but he presents his edition as a more faithful version of the story than Motte’s. 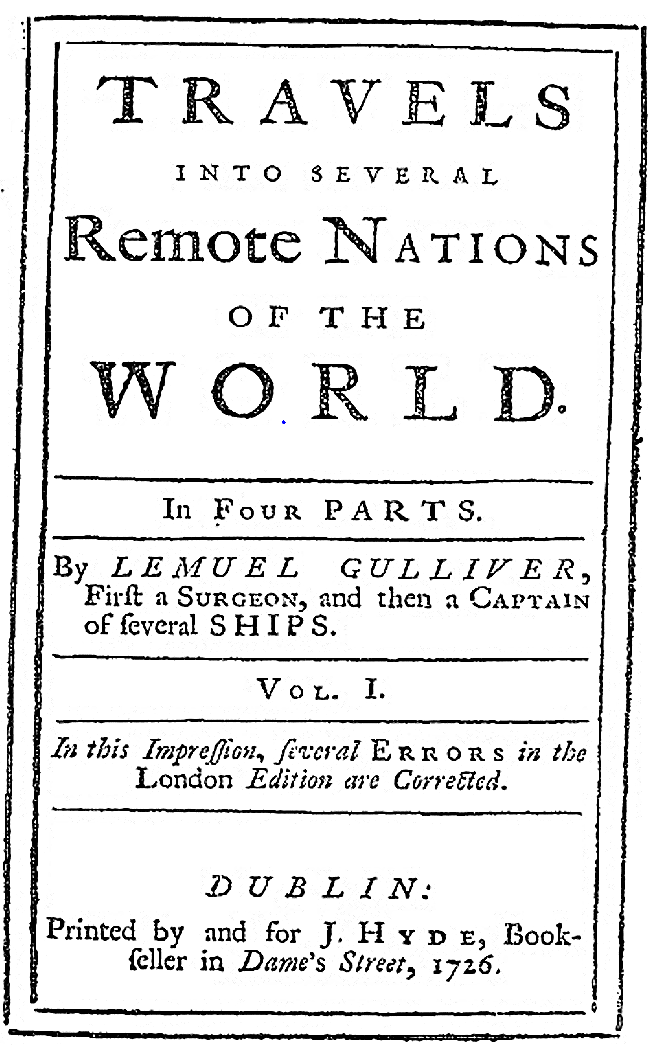 But title pages can also tell lies. The title page of the first edition of Travels does not identify the Irish essayist and poet Jonathan Swift as the author at all. Instead, Lemuel Gulliver is presented as the author of the text and there is no hint at all that Gulliver is a fictional character and that his voyages are anything less that believable. Many editions even include a facing portrait of the fictional Captain Gulliver. 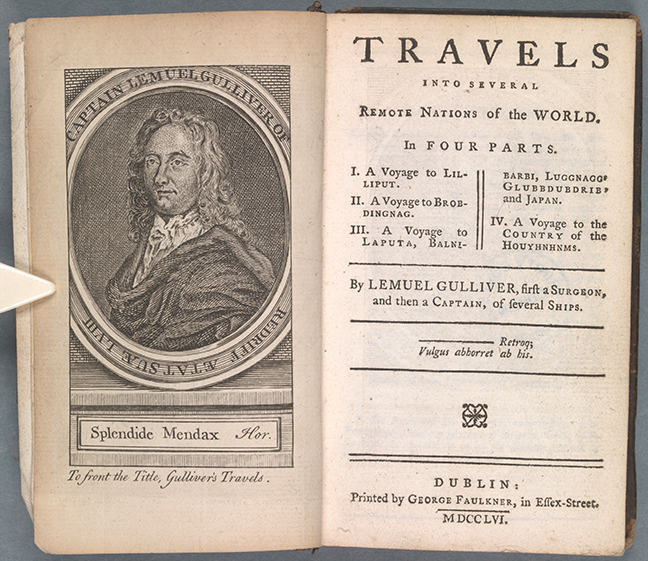 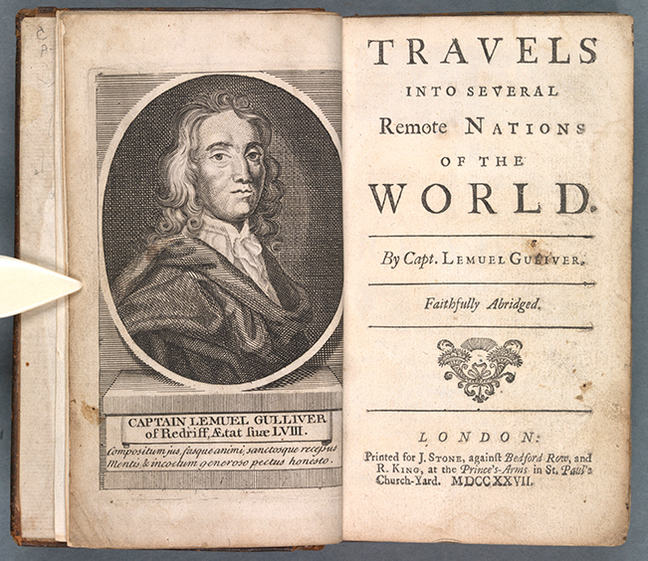 And this abridged version from 1773 claims to contain the first two parts of Gulliver’s narrative – his adventures in Lilliput and Brobdingnag – but actually only contains the part concerning Lilliput. 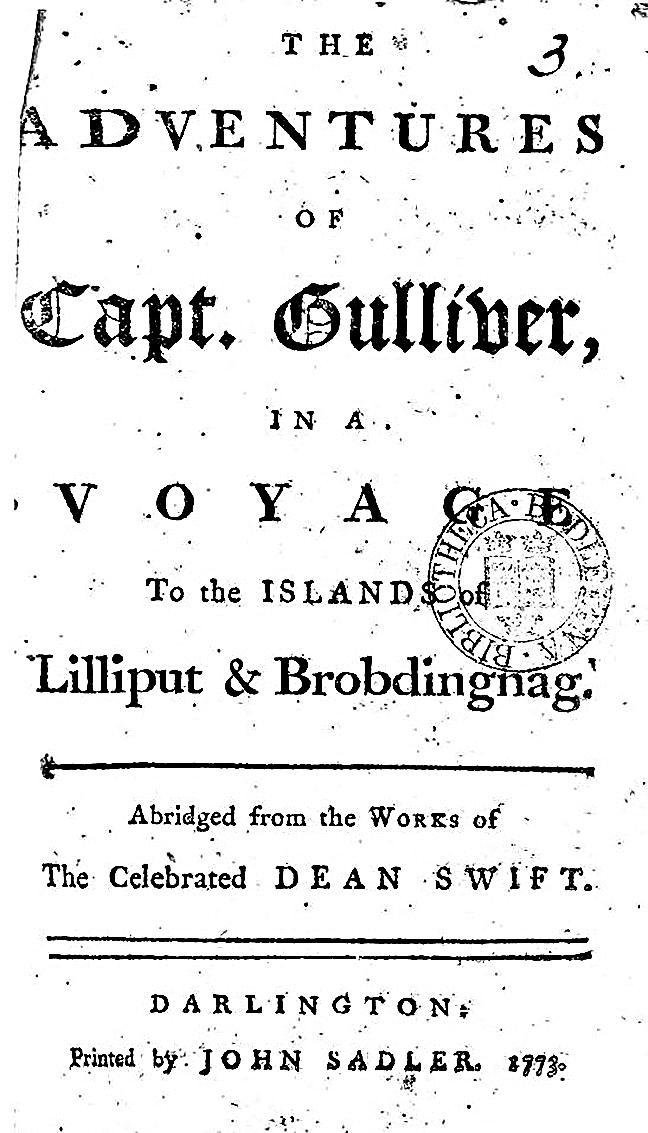 Fig 5. Jonathan Swift, The Adventures of Capt. Gulliver, in a Voyage to the Islands of Lilliput and Brobdingnag (Darlington, 1773), title page. © Google Books

This book is not even a copy of the real Gulliver’s Travels at all, but a fake that uses the title containing plagiarised material from some other books including the English translation of Denis Vairasse d’Allais’s Histoire des Sevarambes from 1675. 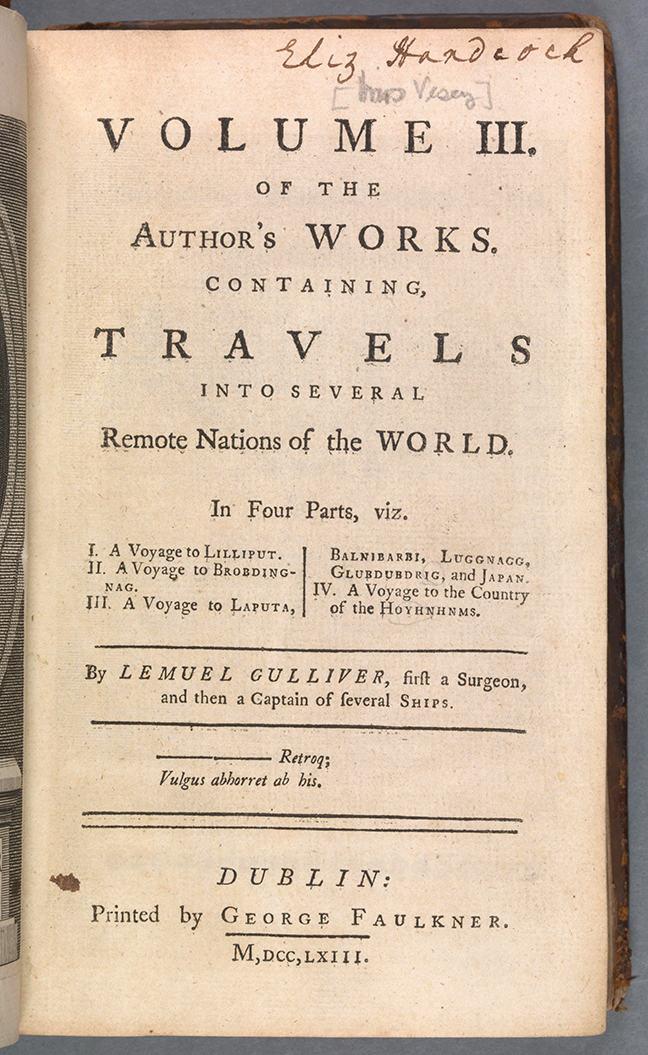 Title pages play an important role within the early modern book and because they can both inform and deceive readers, it is worth paying them close attention.