This content is taken from the Trinity College Dublin's online course, The History of the Book in the Early Modern Period: 1450 to 1800. Join the course to learn more.
View course
4.5

Print and the scientific revolution

Our previous step investigated the interaction of print and the medical revolution in early modern Europe. Another fascinating influence of print is how it guided our understanding of Earth and its position in the cosmos. 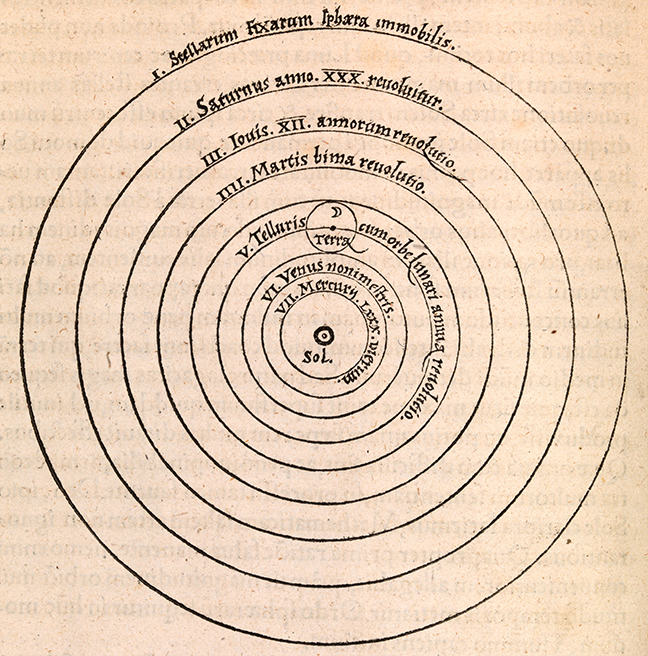 This diagram represents Nicolaus Copernicus’ revolutionary change to our understanding of the solar system, which formed the basis of the Scientific Revolution. Instead of the Sun revolving around the Earth, a system advocated by the second-century astronomer Claudius Ptolemy, Copernicus (1473-1543) argued that the Earth (terra) revolved around the Sun (Sol). This concept was revolutionary in every sense, for now Earth had lost its dominant position and was just one of six planets revolving around a central Sun. Copernicus was aware that it could meet with strong opposition from the Roman Catholic Church and indeed had delayed publishing his work for this reason. However, with the support of Georg Joachim Rheticus (1514-74), a fellow mathematician and astronomer, he decided to print his findings. 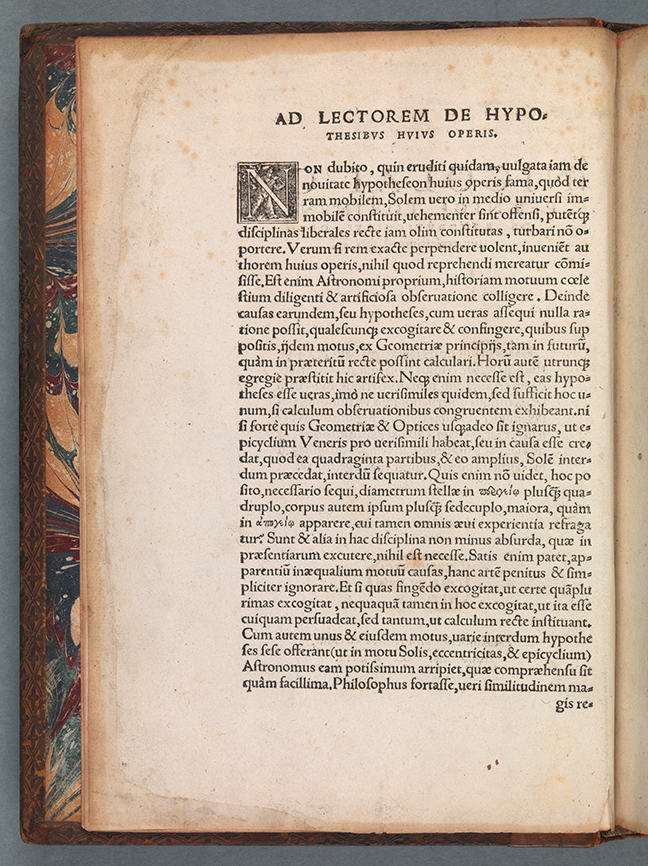 Copernicus used a number of textual strategies to satisfy the Vatican: in the book he included a letter in support of his work from Nicholaus Schönburg, Cardinal of Capua (1472-1537), who had been a papal secretary to Pope Clement VII (1478-1534). To this he added a letter to Pope Paul III (1468-1549). Both advocated the truth of his discovery. However, the printed edition (the creation of which Copernicus did not oversee due to illness), not only included these documents but also a letter by the Lutheran reformer, Andreas Osiander (1498-1552). As the title of his letter demonstrates, Osiander, anxious about a Catholic and/or Lutheran backlash, was keen to downplay the revolutionary nature of the work. He did this by insisting that the model was offered as a ‘hypothesis’. By presenting ‘Copernicus the mathematician’ as opposed to ‘Copernicus the radical astronomer’, Osiander sought, successfully, to ensure that the work was not condemned. His softening of Copernicus’s work by this letter did, however, delay the acceptance of the Copernican model. 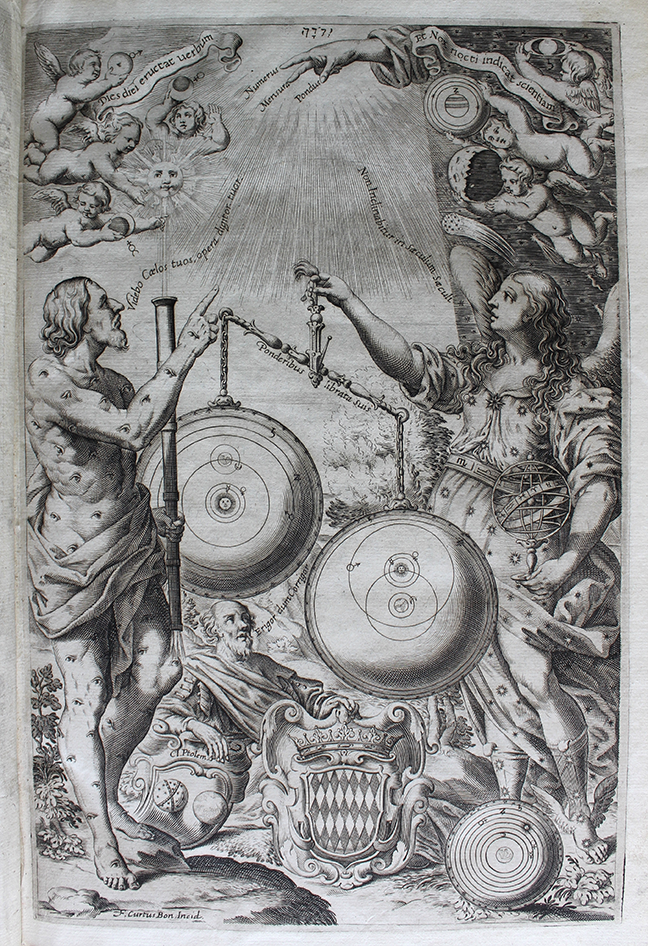 Fig 3. Three cosmic systems illustrated on the frontispiece of volume 1 of Giovanni Battista Riccioli Almagestum Novum (Bologna, 1651). © The Trustees of the Edward Worth Library, Dublin.

As this frontispiece from Giovanni Battista Riccioli’s Almagestum Novum of 1651 demonstrates, over one hundred years later, the Copernican model was viewed as only one of a possible three interpretations:

The fact that Riccioli depicted the Tychonic model as ‘weightier’ in the balance reflects his adoption of a version of the model of Tycho Brahe (1546-1601). 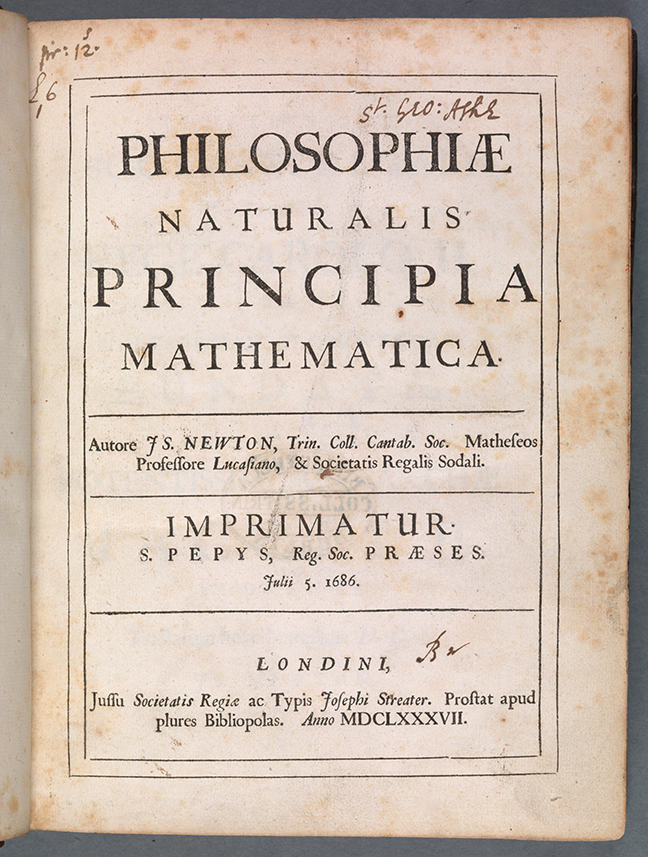 Fig 4. Signature of St. George Ashe (1657-1718) on the title page of his copy of Sir Isaac Newton, Philosophiae naturalis principia mathematica (London, 1687). © The Board of Trinity College Dublin.

Ultimately the Copernican model was the foundation of the most famous science book of all time, Newton’s Principia. Unlike Copernicus, Newton had nothing to fear from publication in print – his book was being published by the Royal Society of which he was a member. Whereas Copernicus’s book had taken a long time to be published and even longer to be accepted, Newton’s great work was read hot off the press.

We know from the papers of the Dublin Philosophical Society that St. George Ashe (1657-1718), a founding member of the society and Provost of Trinity College Dublin, was reading it even before it was bound! The foundation of various scientific societies such as the Deutsche Akademie der Naturforscher Leopoldina (1652), the Royal Society (1660), and the Académie des Sciences (1666), with their accompanying print journals, revolutionized scientific research in early modern Europe.