The Enlightenment and print

There are as many definitions of the eighteenth-century Enlightenment as there are historians, so it would be foolhardy to imply that a movement as diverse and disputatious as this could ever be exemplified by just one text.

And yet, this Irish edition of an English translation of a French book (first published in Switzerland) tells us quite a bit about the exchange of ideas in Enlightenment Europe, the debates those ideas inspired, and Ireland’s place in the international print market.

The book is Voltaire’s Traité sur la tolérance, or Treatise on Tolerance; the translation is, or purports to be, by the Scottish novelist Tobias Smollett, and this copy was printed by a Dublin bookseller, John Exshaw of Dame Street, in 1764, less than a year after its initial publication in Geneva in November 1763. 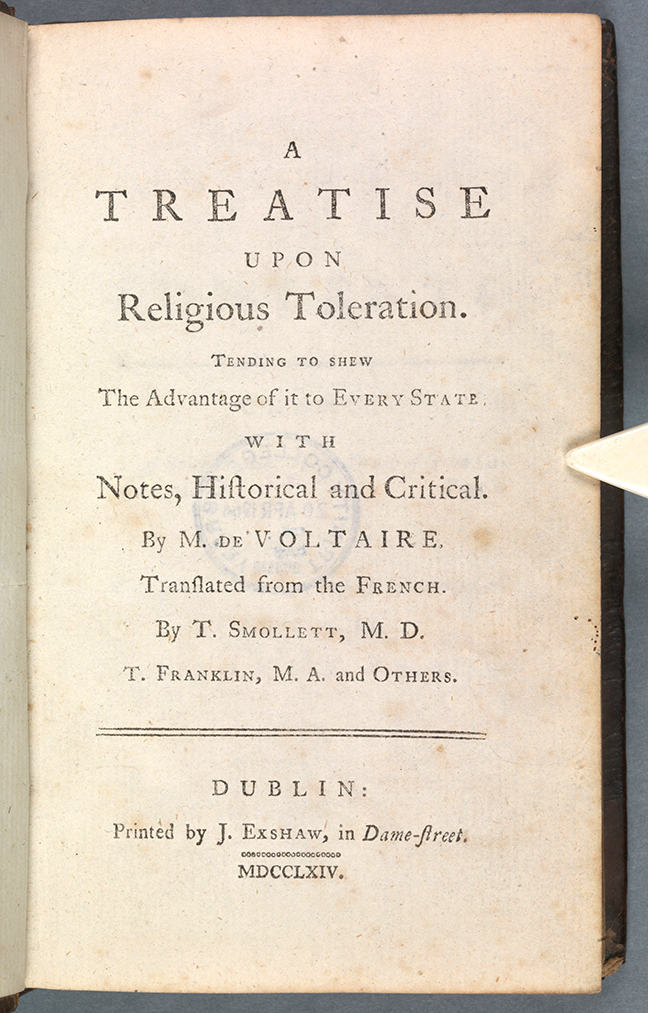 Fig 1. Voltaire, A Treatise upon Religious Toleration. Tending to shew the advantages of it to every state, with notes, historical and critical, by M. de Voltaire; translated from the French, by T. Smollett, M.D., T. Franklin, M.A. and others (Dublin 1764), title page.

The origins of Voltaire’s Traité lay in an infamous miscarriage of justice, a judicial murder that shocked Europe. On the evening of 13 October 1761, Marc-Antoine Calas was found dead in his father’s shop in the southern French city of Toulouse. It seems likely that Marc-Antoine committed suicide, but rumours quickly spread that his family had murdered him. The Calas family were Protestants, members of an embattled religious minority in a hostile, intolerant state and Marc-Antoine, it was claimed, was killed to prevent his conversion to Catholicism. The whole family was immediately arrested and the father, Jean, was indicted for murder. There was no evidence to support this accusation, but nonetheless Jean Calas was convicted of his son’s murder and sentenced to death on 9 March 1762.

His execution the next day was, by the standards of the time, unremarkable. In a final, futile attempt to extract a confession, Calas was tortured that morning before being led barefoot through the city to a scaffold on the place Saint-Georges. There, he was tied to a cartwheel as his limbs were smashed with an iron bar. He was left hanging there, in agony, for two hours before the executioner finally strangled him and threw his body onto a brazier to burn before a watchful crowd. 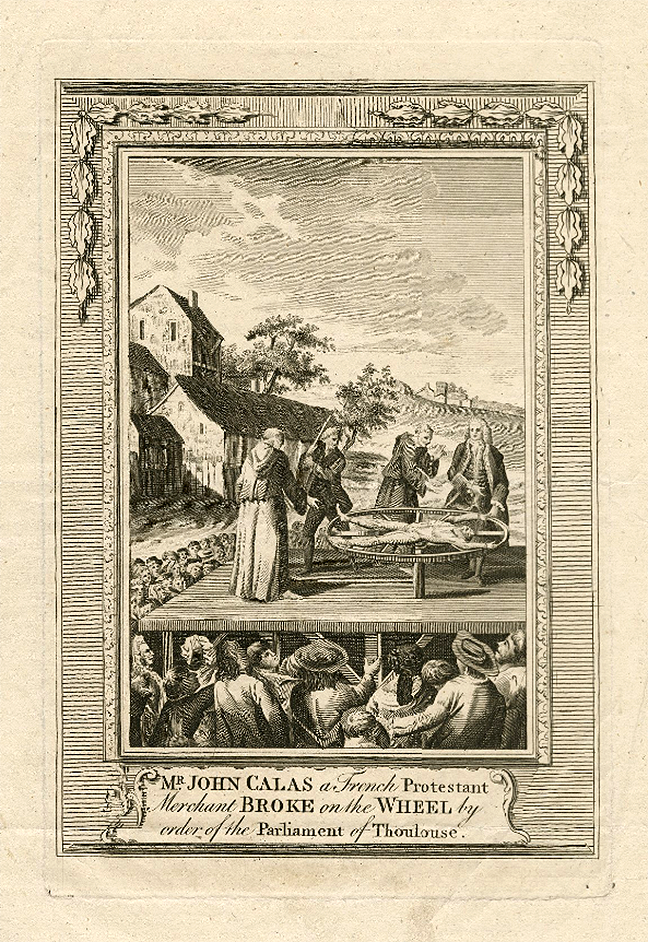 There was nothing particularly unusual about any of this. Like most states in eighteenth-century Europe, France was an unforgiving place for religious minorities. Since they had been stripped of their rights by royal decree in 1685, French Protestants had endured periodic bouts of persecution, and that persecution always intensified in wartime. In 1762, France had been at war for six years against a predominantly Protestant coalition led by Britain and Prussia and popular anti-Protestantism was, consequently, in full flow. Indeed, Calas was not even the first French Protestant executed because of his religion that spring, but however unexceptional his fate, his case was different.

The difference was François-Marie Arouet, an author acclaimed, in Oliver Goldsmith’s terms, as ‘the poet and philosopher of Europe’, but better known to posterity by his penname, Voltaire. By the 1760s, Voltaire’s international reputation as a poet, playwright and all-round polymath was at its peak, and his word carried weight, not just with the reading public, but in chanceries across Europe. 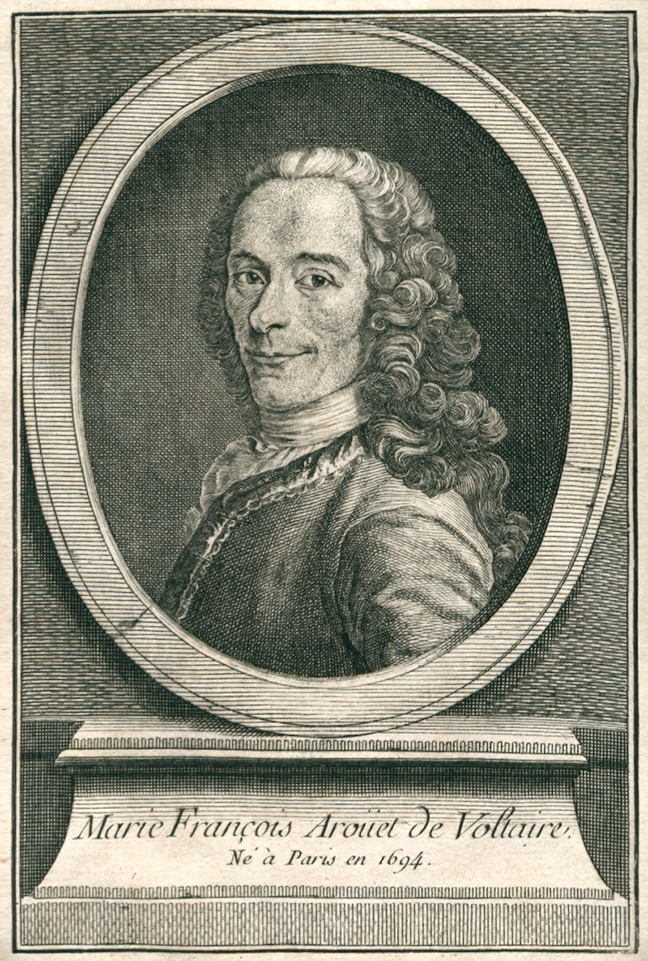 Word of Calas’ death reached Voltaire a few weeks after the execution on the place Saint-Georges, and he quickly became obsessed by the case. That obsession inspired a crusade, a campaign to clear Calas’s name and to strike a blow against ‘l’infâme’, the almost untranslatable term Voltaire adopted around this period to describe the twin evils of superstition and intolerance, especially intolerance of the Catholic kind.

That crusade was fought across two fronts.

In June 1764, the King’s Council annulled Calas’ conviction, and the following March, his name was finally cleared and his family fully rehabilitated. It may be too much to suggest, as one of his biographers has claimed, that Voltaire ‘created public opinion’ during this period. However, he did mobilise the public as a force to be reckoned with in a campaign that looked beyond the authorities to appeal to educated opinion across Europe, and it is the international resonance of that appeal that seems most striking now.

The Republic of Letters

The eighteenth-century Republic of Letters was a quintessentially international community of writers and readers and Voltaire, from his estate at Ferney on the Franco-Swiss border, was quite literally at the heart of this pulsating network of intellectual exchange. His works were published throughout Europe, from Sicily to Stockholm and from Istanbul to Edinburgh in the 1750s and ‘60s, and Dublin was no exception.

As the second city of the British Empire, Dublin was a thriving centre of publication and translation in the mid-eighteenth century and Voltaire’s writings were widely available, in both French and English translation, to the Irish reading public. Máire Kennedy has catalogued the contents of almost two hundred private libraries from this period and books by Voltaire featured in more than half of them, while Dublin’s booksellers did a lively trade in translations of his best-known works. At least twenty such translations appeared in the 1760s alone, and extracts from his writings regularly reached an even wider audience in popular periodicals like The Dublin Magazine. Given this status as Ireland’s favourite foreign author, it is scarcely surprising that Voltaire’s most controversial work could be bought, in English, on Dublin’s Dame Street within a few months of its original appearance in French.

When Voltaire took up a cause, it became a matter of immediate, international concern. In an ever more inter-connected Europe, new ways of thinking about religion’s place in the body politic and new conceptualizations of citizenship and the state were increasingly common currency among educated Europeans, and those ideas would prove just as revolutionary in Ireland as they did in France.