This content is taken from the University of Wollongong's online course, Homo Floresiensis Uncovered: The Science of ‘the Hobbit’. Join the course to learn more.
View course
1.10

0:10Skip to 0 minutes and 10 secondsIn a cave on the Indonesian island of Flores, a discovery was made, challenging many beliefs about the origins of our species. Homo floresiensis, or "the hobbit," as people have come to know it, is an entirely new species of hominin that predates our species in this region. The University of Wollongong and a team of international archaeologists are working together with locals from Liang Bua, unearthing this cave's many secrets.

0:38Skip to 0 minutes and 38 secondsThe first time Rokus worked at Liang Bua was in July of 1965. And how did you get here? [SPEAKING INDONESIAN]

0:53Skip to 0 minutes and 53 secondsRokus just said the first time he worked here-- he's from the central part of Flores, and he actually walked here from there, to work, to meet with-- Father Verhoeven? Yeah, [SPEAKING INDONESIAN]. Oh, because Father Verhoeven had told him to meet him here to start excavating. Father Verhoeven was a missionary here on Flores-- starting in 1950? Yes. Yeah-- and onwards. And he was also very interested in archaeology. And so he and two other missionaries were trying to basically survey the island and identify all the caves, particularly for possible archaeological sites. And when they were in Ruteng, they heard from local people that there was a really big cave near Teras, which is the village directly behind Liang Bua.

1:42Skip to 1 minute and 42 secondsAnd many of our local workers come from there. So, in the 1950s, Verhoeven made a bit of a test pit at Liang Bua and realised it was good. And so he tried to raise some funds so that they would be able to excavate. And the first big excavation was in 1965. And that was when he said, Rokus, get your butt here to Liang Bua, yeah? And so it took him just less than one week to walk from his village to Liang Bua-- because at that time there were no roads.

2:12Skip to 2 minutes and 12 secondsAnd a few years after that, Professor Soejono, who was the senior archaeologist at the National Centre for archaeology, made plans to work-- to excavate at Liang Bua, the first time in 1978. And from 1978 there were several excavations, until 1989. Yeah. And then excavation started again in 2001. Jatmiko brought Professor Mike Morwood to Liang Bua, because Jatmiko had worked here in 1989, right? With Rokus and the rest of the team. And they had stopped after 1989. But then Mike Morwood made plans with Professor Soejono, and they started again, starting from 2001. From the very start, the Indonesian archaeologists have always done lots of excavations. And this site was first excavated by a Dutch priest and Indonesian archaeologists.

3:11Skip to 3 minutes and 11 secondsAnd Indonesians have always had a very good archaeological research group. And we've been working with them since the very start, in 2001, at this particular site. They've been leading pretty much all the excavations, thinking about all the problems, analysing all of the finds first off We've been doing certain specialist tasks, such as doing some of the dating-- doing some of the geochemistry-- ones that they don't happen to do in Indonesia. But the Indonesians can do a lot of the basic stuff themselves. And they've also got the field crews, who are experienced doing all the archaeological excavations.

3:40Skip to 3 minutes and 40 secondsAll of us are aware that Liang Bua is one excellent site that consist the prehistoric time, from Pleistocene to Holocene, and almost complete-- almost complete. We never-- very rare that we find the habit station site, like cave, that has the complete sequences. So Liang Bua is the only site where we have evidence of Homo floresiensis. There are other sites on Flores that date between 800,000 and a million years ago, where we have evidence of stone tools. And humans are the only species known to make stone tools, so it's indirect evidence that-- or direct evidence, actually-- that humans were behaving on the landscape as early as a million years ago, here on Flores.

4:27Skip to 4 minutes and 27 secondsOur species, Homo sapiens, only evolves in Africa roughly about 200,000, 250,000 years ago. So there's no way that our species could have made those tools at the Soa Basin. Similarly, here at Liang Bua we have deposits that go back to about 100,000 years ago. And we see stone tools throughout that. Our species really didn't leave Africa till roughly about 100,000 years ago. So, again, some of the earliest stone tools that we have at Liang Bua could not have been made or manufactured by our species.

4:58Skip to 4 minutes and 58 secondsSo we still have many research questions about Homo floresiensis-- how it behaved, how it interacted with the surrounding landscape and the ecosystem that was here-- as well as a whole suite of other large animals, such as pygmy stegodon, an extinct form of elephant, as well as giant marabou stork and large vultures, as well as Komodo dragon, that were here in this area at that time, coexisting with Homo floresiensis. All of those taxa seem to disappear together in the sequence that we have here at Liang Bua. And after that point, we then begin to see evidence of our species, modern humans. And Liang Bua is also very special in having a very complete Holocene sequence.

5:43Skip to 5 minutes and 43 secondsSo, for the past 10,000 years, we get to see the changes that our species went through as they dispersed to this area and initially were hunting and gathering, and as they transitioned to farming, and then on to other technologies that came in after that. So at Liang Bua we can see all of that, and it makes it a very special site to study human behaviour, not only for the fact there's two human species that are represented here but also just the changes through time for both of those species.

The Indonesian island of Flores

Liang Bua is a large limestone cave on the Indonesian island of Flores that has become a world-renowned archaeological site. It is particularly significant because it has preserved the remains of two different species of hominins, Homo floresiensis and Homo sapiens, in direct association with evidence of their behaviour and the remains of other fauna.

The island of Flores is situated between the Asian and Australian continental shelves, and the cave is located at the foothills of Golo Tando (‘Golo’ meaning hill), at an altitude of about 500 m above sea level and around 200 m south of the confluence of two perennial rivers, the Wae Racang and Wae Mulu (‘Wae’ meaning river). Liang Bua means ‘cold cave’ in the local Manggarai language (‘Liang’ meaning cave and ‘Bua’ meaning cold). It is about 50 metres deep, 40 metres wide, and 15 metres high (at the highest point). 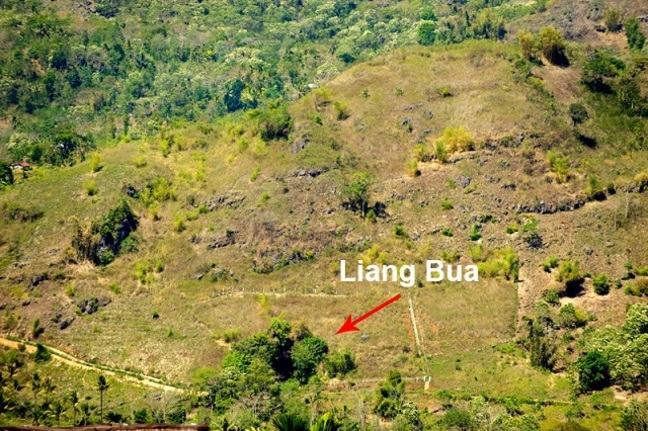 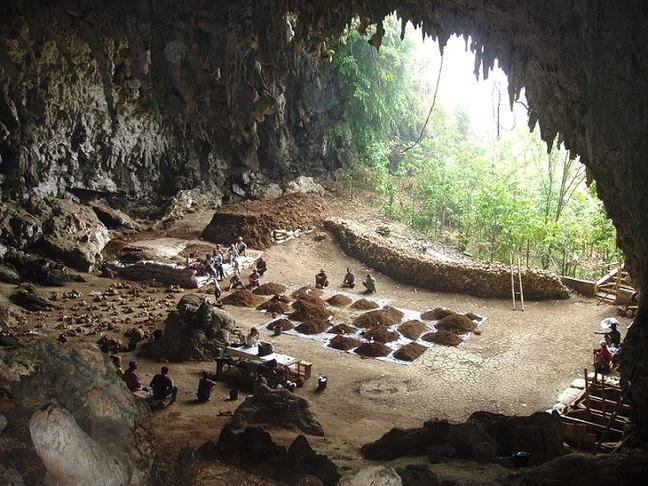 Liang Bua as viewed from the inside (Photo: © Liang Bua Team/ARKENAS).

“Liang Bua is also very special in having a very complete Holocene sequence. So, for the past 10,000 years, we get to see the changes that our species went through as they dispersed to this area and initially were hunting and gathering, and as they transitioned to farming, and then on to other technologies that came in after that. So at Liang Bua we can see all of that, and it makes it a very special site to study human behaviour, not only for the fact there are two human species that are represented here but also the changes through time for both of those species” (Thomas Sutikna, archaeologist)

To experience a virtual tour of Liang Bua, explore the Smithsonian’s 3D model of the cave