How is Food Made? Understanding...

0:11Skip to 0 minutes and 11 secondsCanning is a process that has been with us for a long period of time. It was first developed in the early 1800s in France, when people were trying to find a way in which to preserve food for longer, especially for people serving in the Navy. Of course, back then we didn't have the scientific validation of why these type of products they could extend the quality, in terms of of microbiology, longer than others. It wasn't until Louis Pasteur actually proven that it was the heat element of it that would confer this beneficial effect into canned products. Of course, from that point up to today, the technology has improved.

0:49Skip to 0 minutes and 49 secondsAnd today, we are in the place when we know much about a variety of microorganisms, how we can confer the lethal effects to preserve them, as well as use other containers-- not only tins, but also pouches, plastic bags, and glass. This is an actual canning instrument. This is called a retort. And this particular instrument is industrial, scale so it's exactly identical with the that are being used in the industry. The point of sterilisation is to ensure that we have destroyed, disposed of bacteria, with special attention to a specific bacteria which is called Clostridium botulinum, which is responsible for the production of a toxin that could be lethal if consumed.

1:27Skip to 1 minute and 27 secondsThe story of the food products that are being placed for sterilisation is that, first of all, they are being used to fill containers. These containers can be either jars or metal ones. And then this initial warmup is a pre-cooking stage. And then as soon as they are warmed up, they are sealed in order to ensure that we don't have any air inside them. As soon as this is done, then they are being introduced in the retort. So the normal operation parameters of the retort will be a high temperature, 125, for a certain amount of time. And the goal is to ensure that these spores are destroyed, but at the same time to have some cooking element into the product.

2:04Skip to 2 minutes and 4 secondsAs soon as the cycle is done, then the system starts to cool down slowly to ensure that the pressure again gets stabilised. And then the containers are cooled down so that they can be taken out of the system, and then be consumed.

In this video, we show you how one of the most common food processing technologies is carried out - preserving food in metal cans.

Tinned or canned tomatoes are a staple item in many kitchen cupboards. All canned tomatoes are one of two tomato varieties: standard garden vine tomatoes and plum tomatoes, both of which are peeled before canning in juice or purée. The structural strength of plum tomatoes makes them ideal for canning. They are meaty and contain less juice and fewer seeds, which means they maintain their shape in the can. Garden vine tomatoes function nearly as well but have a different flavour profile and a different shape. All canned tomatoes are cooked in the can during the sterilization process, which ensures their safety and long shelf life. One drawback of canned tomatoes is that with prolonged exposure to the aluminium of the can, the acid from the tomatoes interacts to cause tomatoes to adopt a ‘tinny’ taste. This can be avoided by coating of the inside of the can to prevent direct contact. This used to be mainly through use of an epoxy resin, but these coatings contained bisphenols, including bisphenol A (BPA), which was linked to health concerns. Food can linings are now typically made from acrylic and polyester. 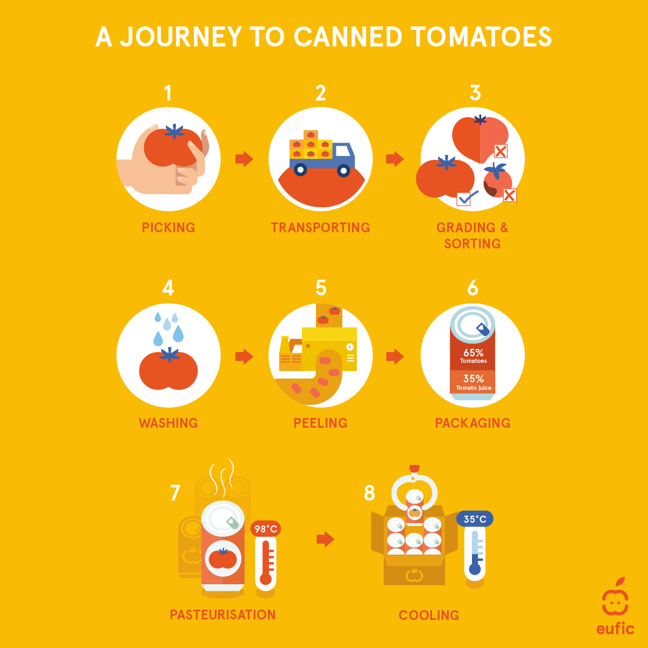 How is Food Made? Understanding Processed Food