This content is taken from the University of York's online course, Poetry: How to Read a Poem. Join the course to learn more.
View course
3.14 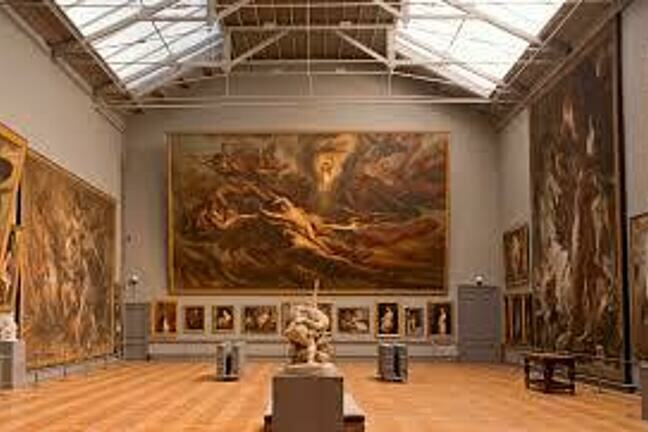 Gallery room from The Royal Museum of Fine Art, Brussels.

Tracking down a poem's paintings

Perhaps the most iconic of modern poems about iconic pictures is W.H. Auden’s 1938 ‘Musée des Beaux Arts’, named for and set in the royal museum of art in Brussels. It begins with a provocative generalisation about the ‘old Masters’:

About suffering they were never wrong,

The old Masters: how well they understood

Its human position: how it takes place

While someone else is eating or opening a window or just walking dully along;

The straggling, 13-line opening paragraph goes on to mention a series of scenes where the aged are waiting for ‘the miraculous birth’, there are ‘children skating on a pond’, a ‘dreadful martyrdom’ is taking place in a corner, and a ‘torturer’s horse’ is scratching its ‘innocent behind’ on a tree.

In the second paragraph or stanza, the poem cuts to a particular named painting, testing its opening generalisation on a Renaissance landscape that is now irrevocably attached to Auden’s poem:

In Breughel’s Icarus, for instance: how everything turns away

Quite leisurely from the disaster; the ploughman may

Have heard the splash, the forsaken cry,

But for him it was not an important failure; the sun shone

Water, and the expensive delicate ship that must have seen

Something amazing, a boy falling out of the sky,

Had somewhere to get to and sailed calmly on.

Here the neat 8-line stanza pans over the painting like a movie camera, picking out salient details, and ending with the shot of the marginal miniature image of ‘a boy falling out of the sky’ and into the ‘green/ Water’, apparently unnoticed by the working farmer or anybody else.

The poem is about seeing and not seeing, about the relationship between everyday life and the sacred, momentous, and mythical, and about how hard it is to be aware of the larger context of anything significant. Everyone reads the poem as a response to the Renaissance Dutch painter Bruegel’s ‘Landscape with the Fall of Icarus’, but this is only one of the paintings Auden has in mind (it’s a ‘for instance’). The poem isn’t named after a painting but the gallery, and moves between numerous painted images as if they were real scenes. Details allude to other Renaissance paintings, including of the biblical Simeon awaiting a ‘miraculous birth’, a ‘dreadful martyrdom’, children skating, a torturer’s horse – none of which are in ‘Icarus.’ In W.H. Auden: A Commentary, John Fuller quotes an Auden letter of 1938 where he says ‘I have been doing the art gallery and trying to appreciate Rubens’, while also citing Auden in interview saying the poem ‘was inspired by two pictures, Winter and The Massacre of the Innocents I saw in Brussels.’ It also draws on Bruegel paintings not in Brussels, including The Numbering at Bethlehem The Numbering at Bethlehem in which you can find ‘the torturer’s horse’ and ‘children skating,’ even if we don’t know which ‘dreadful martyrdom’ Auden had in mind.

The poem about the gallery experience begins unexpectedly by talking about suffering rather than the aesthetic, bringing together the ethical, political and everyday life documented by Bruegel who has recently been described by T.J. Clarke as a particularly ‘grounded’ painter. In fact, to understand the poem, we need to pan back, and understand its own grounding in a view from a particular time and place. Auden was in Brussels, writing up his experience of the Sino-Japanese war in Journey to a War, documenting it in his own photographs (including of front-line soldiers), his ‘In Time of War’ sonnets, and Isherwood’s prose account. Seen in this context, Bruegel’s The Numbering of the Jews with its ‘torturer’s horse’ and The Massacre of the Innocents must have evoked what he calls in one of his Chinese war-sonnets ‘places where life is evil now/ Nanking. Dachau.’ That is, the poem obliquely registers war in the numbering of Jews across the border in Nazi Germany, the torture associated with Dachau, and war in Asia. Setting the winter landscape with children skating against The Massacre of the Innocents and the art gallery against contemporary suffering, Auden intensifies the incommensurate kinds of experience represented in the picture plane. In another sonnet from China, he reports of patients in a military hospital that ‘They are and suffer that is all they do:/ A bandage hides the place where each is living.’

The art historian Alexander Nemerov associates Auden’s view of Bruegel’s falling Icarus with Isherwood’s description of an aerial casualty in Journey to a War: Presently a shell burst close to one of the Japanese bombers; it flared against the blue like a struck match . . . .Then came the whining roar of another machine, hopelessly out of control; and, suddenly, a white parachute mushroomed out over the river while the plane plunged on, down into the lake behind Wuchang.

Auden’s war photos and Isherwood’s prose pictures contribute to Auden’s picturing of the ‘boy falling out of the sky’ in Bruegel. The poem reminds us that paintings in a gallery need to be read in their own terms but also of others in the gallery and beyond as well. The gallery experience is not separable from the historical world outside the gallery walls and the boundaries of the poem.

You may like to view these links, which are included below. Read W. H. Auden’s poem ‘Musée des Beaux Arts’ on the Poetry by Heart website..

Consider these prompting questions let us know what you think in the comments section. You may like to use these questions as a starting point for your comment, or you may choose to answer one specific question - we look forward to hearing from you!

If you read Auden’s poems alone, how vividly do they bring particular images and pictures to mind?

If you know the Bruegel paintings he is describing does the poem encourage you to think about them?

Do you look at Bruegel’s paintings differently in the light of Auden’s poem? In other words, does his poem guide or shape your interpretation of what you are seeing?

Let us know what you think in the comments section.