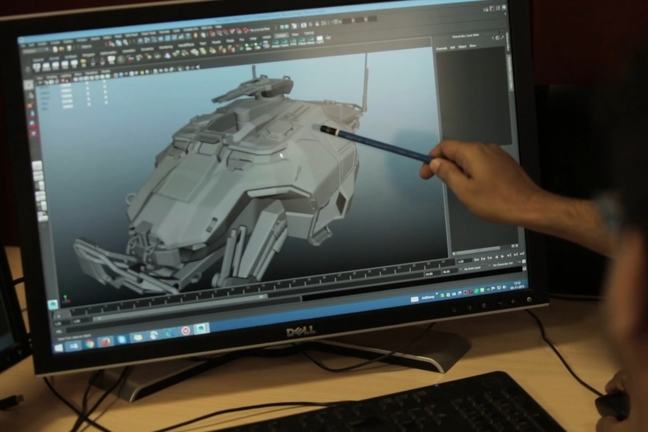 In this step, we’ll explore the production phase in more detail.

Typically, production breaks down into several stages. Each stage has its own deliverables, all contributing to iterate the game and optimise performance.

A vertical slice showcases an incomplete version of the entire game, typically something from all major levels that shows all the major gameplay variations. As suggested by the title, a vertical slice literally takes a cross-section from the heart of the game. It will be playable and gives the full production team an indication of what the finished game will look, feel and play like. It will often include an artistic benchmark to prove and communicate the final graphical quality of the game, which teams will use as guidance for all the art and animation they will go on to produce.

The development teams get into full swing in this stage, working in parallel across all areas of the game. As the art and animation, gameplay and level design and core game programming progress, the producer weaves together all the teams’ progress and challenges encountered, encouraging clear communication and collective problem solving. Often accomplished through a series of sprints, the game can develop rapidly in this phase, but many bugs will remain.

Alpha is a version of the game following main production that has all the content including gameplay feature complete, but bugs still exist and the art and animation may not yet be up to final release quality. Other elements that often start at or soon after Alpha include: localisation, the addition of multiple language content to the game’s copy, UI and audio; QA, intensive and repeated testing of the game by internal and/or 3rd party teams looking for bugs and issues that are fed back into the production team to be fixed; and marketing, where key gameplay segments and video are previewed to journalists and games communities online.

Beta is another stage of completion for PC and console games, where the game is close to completion and the all–important polish is added that can significantly improve a game’s reception by players. Beta release for a mobile game involves releasing the game to 1–5 territories via an App Store, watching how players play the game using analytics, and then the iteration and optimisation of the game using live audience data. Freemium games will often start live market testing at the Beta stage, which means letting live audiences, who are warned the game is not quite ready, play a game. A/B or split-testing which releases multiple variations on game features to different players at the same time, starts at this phase, allowing the development team to iterate the game and improve performance. All aspects of a game can be improved, which in practice usually means any/every feature of a game from gameplay to art to onboarding, meta-game, monetisation and marketing. Localisation may add a number of different languages during this phase.

The Gold stage for a freemium or mobile game is called release, which means the game is live and available in stores. Console games that reach gold need to be tested by the console manufacturers for compliance and quality before they can be released. This stage can enforce long rework cycles for games that do not meet minimum requirements. At this stage, release marketing begins in earnest to ensure the game reaches the maximum audience.

Now that you’ve reviewed the various stages of production, let’s test your knowledge with a quiz.