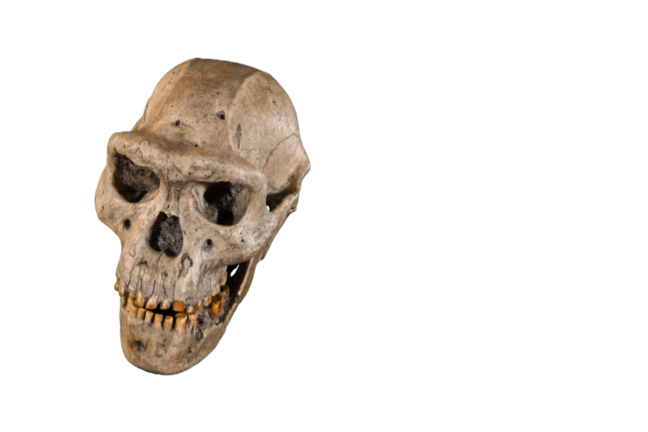 To piece together the story of human evolution, we need to date the pieces.

In this way, we are continually piecing together our story. An ever-growing story of great breadth and complexity.

The story of human evolution has several important aims. Two of these aims are relevant to our course:

Let’s look at a couple of examples…

Say that we are considering two fossil skulls. One fossil skull has been dated as 60,000 years older than the other. We can now start to identify a few possibilities. Are they of the same species or is it possible that each skull represents an entirely different species? It is possible that one of these species is much older than the other species? The older species could be an ancestor of the younger species. We may dismiss the possibility of the younger species being an ancestor of the older.

In this way, we contribute to our body of knowledge on human evolution.

We can also now consider where the two fossils were discovered. For our example, let’s say that archaeologists discovered the older fossil in Africa. But they found the younger fossil five thousand kilometres further north, in Europe. It would now seem probable that the species migrated from Africa to Europe over the millennia.

In this way, we contribute to our body of knowledge on human dispersal.

The chronological sequence allows us to consider ‘who’ and ‘when’. Who was dwelling together, and when were they dwelling together. What if we had discovered both fossil skulls in the same region of Africa? Well, then the story that they told us about human dispersal over 60,000 years would be quite different.

Rainer was recently in London, where he caught up with Professor Chris Stringer, from the Natural History Museum. Chris kindly agreed to let Rainer record a series of chats that they had together on the subject of dating fossils, to present to you over this course. In this first video, Chris discusses the importance of dating human fossils.

By this stage, you may be starting to see that while dating is important to the story - it is not telling us the story. The dating technologies are giving us a calculation of an estimated age range. This calculation has used a particular set of data. These calculations are then used as evidence for the story.

But these calculations do not always fit the established story. What happens when that occurs?

Well, it gives rise to a lot of discussion and debate in scientific circles.

Then we test our new theory.

The aim is to reduce the discrepancies between the observations and the theory. As we repeat the experiments we are able to close that gap a little more.

So … can we ever be completely certain about a theory?

This may seem to be a rather frustrating answer at first. But that’s the reality. New discoveries, new technologies and new experiments all have the capacity to challenge any existing theory.

The exciting thing is that we are always making new discoveries.

Think about the question that was posed in this article:

Imagine that we have discovered two Hominid skulls with very different morphologies (physical features). Both skulls had been discovered in the same region of Africa. Both skulls were dated to around the same age.

What might that tell us about their evolution and dispersal?

Select the comments link below and post your response.