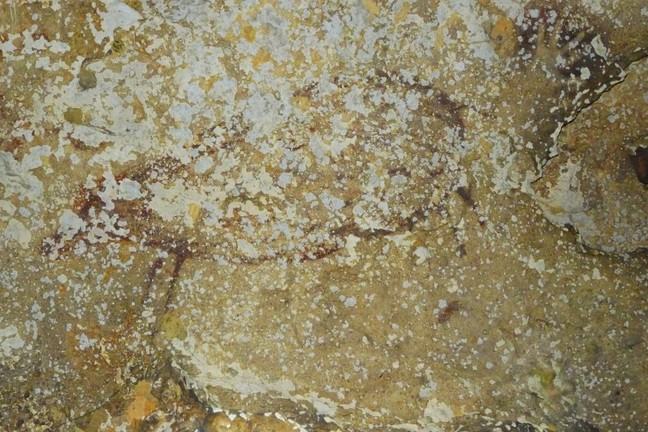 One of the earliest figurative depictions in the world.

Other applications of dating methods

These dating methods are not only used on human fossils. Let’s take a moment to see how a painting of a pig changed the story of our past.

When we think about ancient rock art, we probably think of famous sites in Europe, such as the Chauvet-Pont-d’Arc Cave in southern France, or the Cueva de El Castillo, in Spain. We saw at the beginning of our course how Mathieu’s interest in archaeology was sparked by childhood visits to such caves. Many of you may have also had the opportunity to visit these sites.

A question that has puzzled archaeologists is the lack of similarly dated evidence elsewhere in the world. For many years it was thought that perhaps Europe was the origin of the spread of this type of art throughout the world.

From limestone caves near the town of Maros, Sulawesi, a hand stencil was dated to be at least 39,900 years old. A nearby animal painting of a pig has been dated to at least 35,400 years – making it one of the earliest figurative depictions in the world.

These findings change the story of our past. The implications are that perhaps this art-form had its origins in Africa, and modern humans brought it with them when they migrated to Southeast Asia over 50,000 years ago, and to Europe about 40-45,000 years ago. This study was considered so important that Science magazine listed it in their top ten scientific achievements of 2014.

Maxime and his team used the U-Series dating method to arrive at these dates, taking samples from fourteen different paintings in seven different caves. The technique was not used to directly date the paintings themselves, but rather to date the small nodes of calcium carbonate (called “cave popcorn”) that have grown over the paintings during the millennia since the paintings were made on the rock walls.

This means that what Maxime and his team have done is provide a minimum date age for the paintings. This is another dating principle, the principle of superimposition - the placement or layering of one thing over another. The object that has been layered over the existing object must be younger than the existing object.

The caves and the paintings are not recent discoveries. They were first recorded in the 1950s, but no attempt had been made to date them.

For more information on this fascinating use of dating, have a look at this video by nature.com, where Maxime introduces the art, shows us the cave popcorn and explains its significance.

(We’ve provided a transcript of this video for you, in Downloads below.)

What do you think of the way that a combination of dating principles and methodologies can be used to provide us with insights into our past?

Any questions for Maxime?