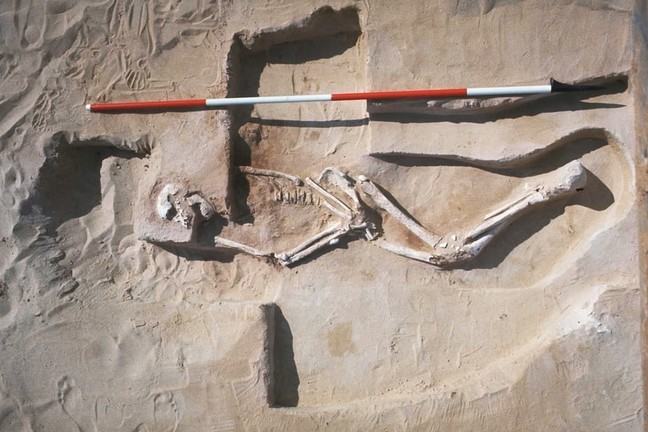 The LM3 burial. Note the red ochre stains around the skeleton. (Photo J. Bowler – with permission.)

How do you date a stratigraphy that isn’t there? By reconstructing it from what is…

When the LM1 and LM2 (Lake Mungo hominid 1 and 2) remains were discovered, deflation had already destroyed the stratigraphic evidence – wearing the surrounding material away and leaving the bones sitting on a little pedestal (Bowler, 1970). This meant that the team needed to reconstruct the sequence of deflation to be able to place the remains in their stratigraphic position. They did this by close comparison of the uneroded sections of stratigraphy nearby, linking soils at the site to these layers. Once they had reconstructed the stratigraphy, they then took shell samples from a site 1.5km further north along the Walls of China, where the stratigraphy closely matched this reconstruction (Bowler et al., 1970).

The stratigraphy of the Walls of China consists of three main layers. The layers were named Gogol (the lowest and oldest), Mungo (the middle) and Zanci (the highest and youngest) (Bowler et al., 1970). They concluded that the bones had been lying in the middle layer of the stratigraphy, the Mungo layer (Bowler et al., 1970). Along with the shell samples, they also took samples of charcoal from a level that they believed to be above the level of the burial.

They brought the samples back to the laboratory and used C-14 analysis on the charcoal from the layer above the site, from the shells taken from the north of the site – and also to direct date the bones by analysis of collagen (Bowler et al., 1970). They reported the shell samples to be around 32,000 years old and the charcoal samples to be around 26,000 to 30,000 years old. The tests on the collagen returned an age of around 24,000 years. The effect of the burning of the bones caused them to retain higher amounts of natural carbon, which they factored into their processes (Bowler et al., 1970). They concluded that the age of the LM1 and LM2 remains was between 24,500 and 26,500 years ago (Bowler et al., 1970).

A look at what’s missing 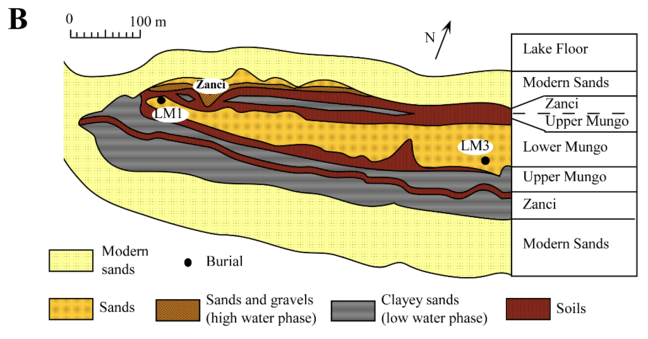 These drawings show the location of the LM3 site in the Walls of China (A), a plan of the layers at the sites of LM1 and LM3 (B), and a section showing the reconstruction of stratigraphic layers that had been deflated (C). (Drawings Rainer Grün – with permission.)

When LM3 (Mungo Man) was excavated, the stratigraphic reconstruction and work that had been done for the site of LM1 and LM2 was used to provide an estimated date by stratigraphic comparison. Trenches were also dug a few metres west of the remains, to help establish the stratigraphy. C-14 analysis was also carried out on associated material, but not on the remains themselves. They concluded that the remains were between 28,000 and 30,000 years old (Bowler and Thorne, 1976).

Later thermoluminescence dating of the lower Mungo layer of the stratigraphy returned dates of between 36,000 years and 50,000 years (Oyston, 1996), suggesting that the site may be beyond the range of C-14 dating at that time. In 1998, a thermoluminescence date of a sample from the layer returned an age of around 41,000 years. (We haven’t covered luminescence dating in this course, but in the links at the end of this page we have included a detailed handbook by Professor Geoff Duller from Aberystwyth University - in case you’d like to dig a little deeper.)

All of these previous dates were indirect dates – dates inferred from stratigraphy and context, and from associated artifacts and sediments. In 1999, Rainer worked with a team that included Alan Thorne, to carry out an ESR and U-series study on LM3 that would include direct dating methods.

The team used bone shavings from LM3 for the U-series analysis and used ESR on the tooth enamel. They also carried out U-series dating on calcitic matrix recovered from the original skeleton, and Optically Stimulated Luminescence (OSL) analysis from sediment taken from a deeper layer of the soil (Thorne et al., 1999).

The results were startling and created a bit of an uproar. They reported that the U-Series and ESR analyses on the bones yielded a date of 62,000 ± 6,000 years. The OSL age estimate on the sediments was 61,000 ± 2,000 years. The U-series analysis of the calcitic matrix returned an age of 81,000 ± 21,000 years (Thorne et al., 1999). All these ages were significantly older than what had been previously assumed from indirect methods.

In 2003, a further OSL study of the site was carried out. Three separate laboratories were used to date samples that were taken from the layer associated with the Mungo remains. They concluded that LM3 was buried around 40,000 ± 2,000 years ago (Bowler et al., 2003).

They can’t BOTH be right…

Both dates cannot be correct. They do not even overlap - there is too big a gulf between 60,000 years and 40,000 years. Two of the researchers who were involved in these studies readily agreed to sit down and have an informal chat about the two vastly different dates. You have already met Professor Rainer Grün. The other is Professor Jon Olley, who was part of the team that conducted the OSL study in 2003.

What did you think of the discussion between Professor Grün and Professor Olley?

Did you find one case more convincing than the other? Which? And why?