This content is taken from the Humanists UK's online course, Humanist Lives, with Alice Roberts. Join the course to learn more.
View course
1.6

What is a humanist ceremony? 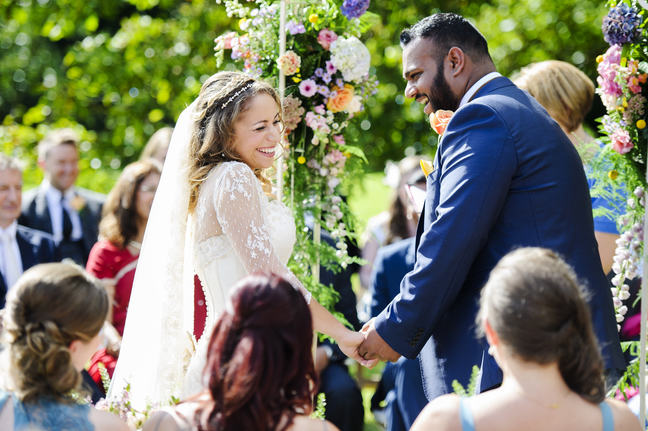 Humanist ceremonies are available in many different countries around the world. Most typically these are naming ceremonies, weddings, and funerals. Humanists UK have been carrying out non-religious ceremonies since 1896, and today humanist ceremonies are available in a number of countries, including Canada, The US, Australia, New Zealand, Norway, and Iceland. In the past decade, demand for such services has grown significantly, as people have become more aware of their availability and the non-religious have felt increasingly emboldened to make a choice that genuinely reflects their own belief system.

Humans have engaged in cultural rituals and ceremony since long before modern organised religions arrived. Humanists will typically argue that what they are doing is simply fulfilling a human need that may have traditionally been fulfilled by religious practices, but need not be. The central thing that is different about a humanist ceremony is the absence of any reference to a deity. This can create a profoundly significant shift of focus and of purpose as, in each case, it is the person who has died, the couple getting married, or the baby who has been born that is put at the centre of the ritualising. At the same time, the community of family and friends are invested with the responsibility of ‘bearing witness’, humanising, instead of, as was previously the case, deifying the experience.

Humanist celebrants have described crafting secular ritual as ‘an intimate, challenging, and profoundly rewarding act of creation’. It is tailored to be personal and meaningful to the people involved and provides an opportunity to articulate the connections that are important to us in our lives. Humanists typically see our relationships with other people as central to the human experience and it is these relationships that are often acknowledged in a humanist ceremony.

It’s important to understand that not all humanists will have humanist ceremonies, and most will not engage in the specific rituals you will learn about this week. Nor is there any implication that humanists should. The rituals you will hear about are not ‘humanist rituals’, they are personal rituals that people have chosen because they have meaning for them. The specific rituals may not be available to all, nor be appealing to all. What is important to humanists, is that everyone should be free to choose how they mark the special moments in their lives.

A humanist celebrant is someone who works closely with the people at the centre of a ceremony to help create an event that is specific to the people involved. Very often this will involve spending time with, and learning about, the people at the heart of the ceremony in order to help tell their story (or, at a naming ceremony, to celebrate the beginning of that story). Rather than following a set script, each script will be unique to that particular ceremony.

A note about humanist weddings

While humanists generally support marriage, there is no compulsion. Not everyone wants to get married. Not everyone has the option. Humanists believe there are many different positive approaches to living and support freedom of choice.

Watching out for recurring themes

As you watch the videos featuring humanist celebrants this week, keep an eye out for any recurring themes. That should help you to reflect on the shared beliefs, values, passions, and experiences that make up a humanist approach to life more generally.

We’ll draw out some of these themes underneath each video. Share your thoughts on these and any others you have noticed with the other learners.