0:14Skip to 0 minutes and 14 secondsJust like Pakistan, Bangladesh is a nation prone to natural hazards. Between 1980 and 2008 Bangladesh experienced 219 natural disasters - causing more than $16 billion in damage, loss of human life, and long-lasting effects on society and the environment. There’s a conceptual model, or framework, that helps us understand why the disasters happened. And it can be replicated in regions throughout the world. This is the Pressure and Release model, or PAR for short. We have hazards but when we consider these hazards in the context of vulnerability, we can better understand risk as the basis for disaster. In the PAR model, there are three stages of vulnerability.

1:01Skip to 1 minute and 1 secondThese are: Root Causes, Dynamic Pressures, and Unsafe Conditions. Together, they are called The Progression of Vulnerability. Let’s first consider Root Causes. This relates to the basic social, economic, and political factors that can give rise to vulnerability to hazards – leading to disasters. As a developing nation, the population of Bangladesh has limited access to resources. There may also be limited access to political power, which may work against sections of the population earning a livelihood. And, in Bangladesh, nearly 40 per cent of the country’s population live in poverty. Often these root causes are ignored by decision makers. Now, let’s consider the ‘Dynamic Pressures’ affecting that society.

2:02Skip to 2 minutes and 2 secondsFor countries like Bangladesh, these include macro forces such as population growth, rapid urbanisation, deforestation and soil erosion and there are many more. Beyond this, we also have ‘deficiencies’, like a lack of institutions providing services such as health care and education. Other deficiencies in Bangladesh range from poor regulation of river systems, to inadequate education about early warning systems. Then there are the negative effects of debt repayments on the ability of countries like Bangladesh to develop and it is one of the most densely populated countries in the world. These dynamic pressures exacerbate and focus the underlying root causes, which are then manifested by more specific unsafe conditions. These Unsafe Conditions include a ‘fragile physical environment’, dangerous locations and exposed buildings.

3:03Skip to 3 minutes and 3 secondsWe can also include fragile local economies and vulnerable groups here, too. And a lack of public actions and disaster preparedness. Plus, there’s the presence of endemic diseases to consider. These unsafe conditions leave a society vulnerable to various hazards. Bangladesh experiences cyclones, monsoons, storm surges, floods, earthquakes, droughts, arsenic contamination of groundwater, tornados and landslides. They have all caused significant problems. Much of the country is low-lying – exposing it to regular flooding. And its rural communities are ill equipped to deal with disaster. Storm events force many families to abandon their homes and livestock. Crops are regularly devastated, and livelihoods wrecked. These people often migrate to cities, finding themselves living in unsafe conditions in slums, and contributing to increased vulnerability.

4:09Skip to 4 minutes and 9 secondsSo, let’s return to our simple equation as one way of understanding the causes and contributors to disaster. Risk is a combination of a hazard with people’s vulnerability. But we also need to consider a county’s capacity to withstand with a hazard. If we can improve capacity – through regulation and standards and an effective disaster plan - then we can reduce the risk. Unless we improve capacity and reduce vulnerability the only response to a disaster in countries like Bangladesh, can be to pick up the pieces afterwards.

How do disasters happen?

(Wisner et al., 2004: 51) introduced a model framework to explain how disasters happen, calling it the Pressure And Release (PAR) model. 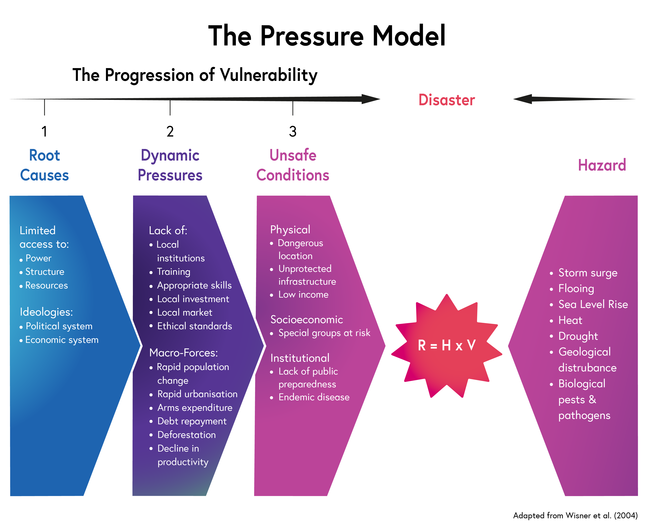 The PAR model seeks to explain how the intersection of unsafe conditions and hazards creates social vulnerability (Cutter 1996: 534). Cutter reinforces this concept, introduced by (Blaikie et al. 1994), providing an example model for hunger analysis, created by Watts and Bohle (1993). Their hunger analysis framework supports the argument that political, social and financial conditions can determine vulnerability, risk and capacity and can be linked to a disaster incidence indirectly (Cutter 1996: 534).

Within this framework, risk is seen as having two domains; the potential sources of risk and the contextual nature of the risk itself (Cutter 1996: 536). The ‘hazards of place’ model appears to be a more elaborate and detailed version of the risk equation, as it considers mitigation efforts, but according to Cutter (1995: 537), unlike the risk equation, the ‘hazard of place’ model filters the hazard element ‘through the social fabric of society to determine the social vulnerability of the place’.

Similarly, frameworks have been introduced which measure resilience, incorporating both vulnerability levels and capacity levels. The Disaster Resilience Of Place (DROP) model evaluates how resilient communities are at the local level (Cutter et al. 2008: 598). These models, which promote the value of local and indigenous knowledge, have become increasingly more common. People living in hazard-prone areas have been doing so for centuries and have ‘inevitably, devised their own methods for protecting themselves and their livelihoods’ (Twigg 2004: 131).

Tying this local knowledge and experience to outside interventions will help to build the most effective and efficient strategies for these communities to cope with hazard and disaster risk.

Local solutions to famine in Ethiopia in 1985 were seen as the backbone of the response, as opposed to outside intervention, which was only required at the last stages of the famine, after local communities had exhausted all their options (World Disasters Report 1993: 45-48).

Watch the above video explaining why disasters happen.

Share your thoughts and reasons to why disasters happen in the discussion area.