Preparedness and the disaster cycle

The model of disaster management as a cycle is well established. It defines a cyclical process of actions required to manage risk and impacts in places prone to disasters and emergencies.

Historically, actions relating to disasters have tended to focus on response, reacting to the impact of disasters after they have happened and responding to the needs of those affected as identified in real time.

You will note from the disaster management cycle below that a disaster response (humanitarian relief) follows failure in the mitigation stage and it is at this stage that the disaster occurs. 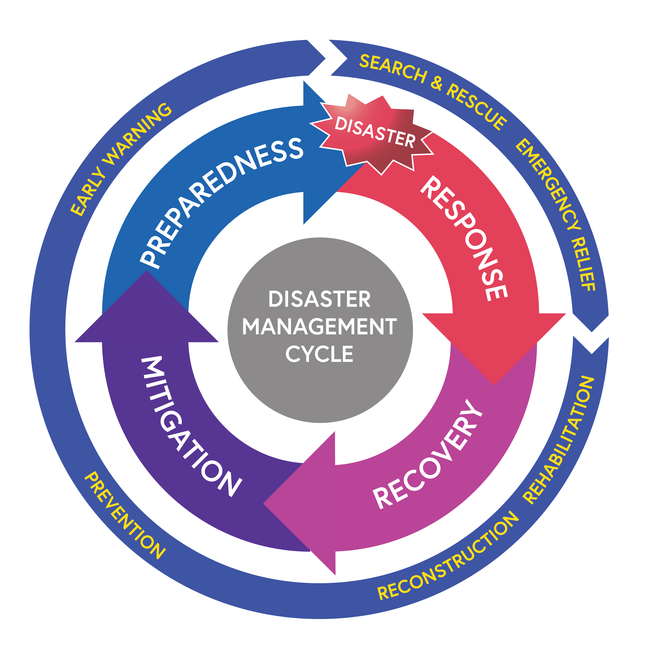 Community preparedness initiatives are widespread in DRR interventions, however organisational preparedness for disaster response is less common and should be have more focus to further improvements and knowledge shared as good practice.

In lower-income countries, there are rarely sufficient resources to reduce risk to a minimum. Even where mitigation actions such as earthquake-resilient housing, flood management assets, water supply, diversification of crops, food supply and livelihood options are taken, residual risks still exist.

Rather than being a cycle where phases have a beginning and an end, it is more realistic to think of the management strategy as a series of overlapping options, any one of which might dominate for a time but each are constantly reviewed and adapted as a result of the others.

This section articulates the need and outlines the process for preparedness for humanitarian agencies. The focus is on emergency preparedness – being prepared for the very early initial response during an emergency, during which period details about the severity of the impact will be unclear. Information will emerge from a variety of sources and need to be verified and at this stage, and the scale and type of needs, degree of accessibility and response capability of communities and agencies is most uncertain. The disaster context is a politically-charged and dynamic one.

What actions can you think of that might be taken by agencies to prepare for any potential emergency response?