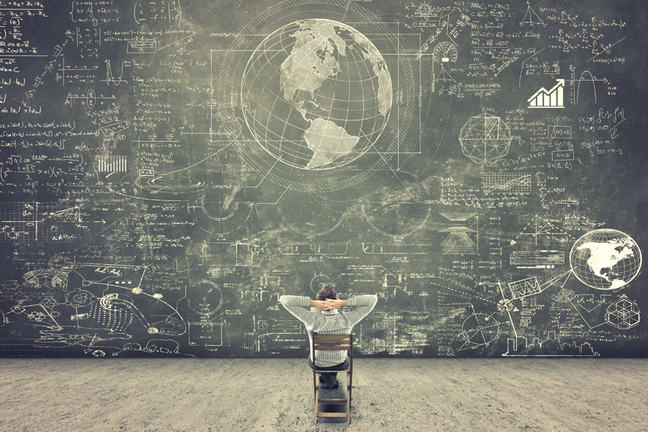 This week’s content serves as the starting point for talking about the ‘big picture’ of the role of technology in our business and everyday lives today. This is done in a completely non-technical way, using six initial concepts and two brief studies on innovation. The first three are ‘up-to-date concepts’, meaning that they have already found their way into the teaching material of technology management. The latter three are what I call ‘upcoming concepts’, meaning that there is already something available in the literature, a book, a few papers or a TED talk, but these are not part of the body of knowledge in the discipline. This week is closely related to the Technology topic of the ‘Understanding Modern Business and Organisations’ course.

This is exactly how we would like technology to work. And sometimes it does. Howard Ramsay was running the first online course I was teaching on and none of the students knew his name. Nobody even wondered how it all worked. If they did wonder, they would probably conclude that there is someone in the background running all of it. Howard did an excellent job, which is why nobody knew about him. In those courses that constantly had problems, everyone knew the ‘technical guys’.

However, we are sometimes not happy if the ‘technical guys’ do an excellent job as we cannot know whether they are working hard. I had an MBA student who was leading the computer department of a middle-sized organisation. Everything was always running smoothly. Finally, some of his ‘boys’ started playing football in the courtyard and the head of the computer department was fired. Quite a few people also left the company with the ‘boss’ and there were many problems with computers afterwards. But everyone was working hard and nobody was playing football. They all found this acceptable.

Leonardo once said, looking at a machine, that it did not work. When they asked him how he knew this, he simply replied: ‘it is not beautiful’. What works is beautiful. The perfect, beautiful technology is what the vast majority do not notice and a small minority admire. Most of my students do not even know the brand of their laptops. Because they are satisfied with it. If they did have one, and they were not satisfied with it, they got rid of it and remembered the brand name (at least for a short time) so that they would not get the same one again. A small minority are monitoring various features and performance parameters and they spend time and money on having what they regard a super-machine.

This approach to technology extends far beyond the users. The Hannover Messe is the largest exhibition of machine manufacturers in Europe. Until a few years ago you would find someone from the R&D department at the stands of a particular machine or, at least a development engineer who knows the product inside out. In the last few years, however, you find exotic dancers around machines that are painted in all the colours of the rainbow, and perhaps a salesman who knows a list of features and all the price variations.

Technology has a dual role with regards to business and organisations. Firstly, we are using technology in our work within organisations to improve it, make it more convenient, and faster. Secondly, our organisations are embedded in the world of business which is interwoven with technology. And technology is, to a significant extent, responsible for the turbulence in the business environment. Apart from how it affects organisations through these two roles, technology also has a substantial effect on us as individuals. Technology has become so embedded in our lives that people who would have been classified as non-technical a few years ago, today use some of the latest high-tech gadgets. Grandparents are on Skype with their grandchildren thousands of miles away. Mathematics teachers use iPads instead of chalk to draw diagrams. Parents are updating their Facebook status from their mobile phone while shopping for groceries. And a great number of people are taking massive open online courses like this one from all over the globe.