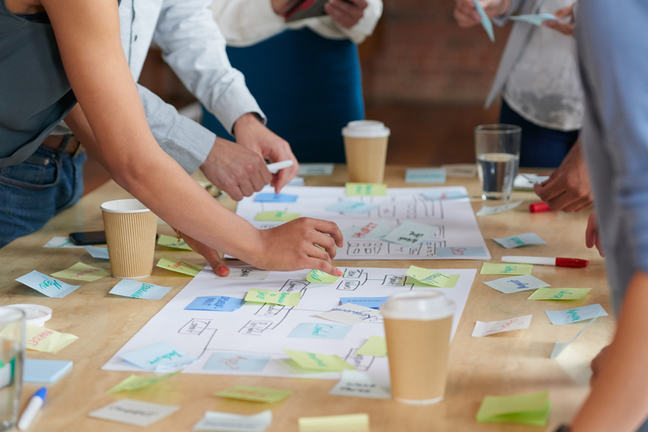 Soft methods, in contrast with the hard ones, leave some space for interpretation. This does not mean that soft methods are completely arbitrary; they have varying degree of standardisation. For instance, most of them use standardised symbols however, as an analyst you would have some freedom in what you represent and how. This also means that soft methods are not exclusively concerned with information systems, they may analyse various aspects of the organisation or a particular problem within the organisation; in short they can analyse anything that can be conceptualised as a system.

Perhaps the most widely known soft method is called ‘Soft System Methodology’ (SSM). SSM is aimed at modelling processes and their interactions. Peter Checkland originally developed SSM to help solving problems in organisational contexts more generally, which is why it is very popular among consultants. It is very often used in IS/ICT, particularly in IS/ICT design. SSM is a meta-method, i.e. a method that operates over other methods and tells which method should be used for what and how. A particularly interesting component of SSM is the ‘Rich Picture’ which allows for a rich representation of complex and ill-structured situations.

Another approach to dealing with complex problems is called ‘Strategic Options Development and Analysis’ (SODA). SODA was developed at Strathclyde by Colin Eden and Fran Ackermann. It uses causal mapping to represent people’s thinking about complex problems. It is also used as a tool for making strategy and the approach is most popular with consultants supporting strategy-making teams.

Other soft methods include: System Dynamics (SD), Viable System Diagnosis (VSD), Contingency Analysis, Interactive Planning, Critical System Heuristics (CSH), General System Theory (GST), and Total System Intervention (TSI). It would be meaningless to cover all the soft methods briefly as there are many of them and the brief explanation would not do justice to what the particular method is about. However, each of them can be found easily on the internet for those who are interested. What is common in all the soft methods is that, although there is a degree of formalism in the process and in the representation, there is still need for interpretation. I would only like to say a few words about the last two, as they are peculiar and their names do not say much about their essence – at least, not to the uninitiated.

The first method that is very different from anything is the GST. Of course, the general system theory is not a theory in the same way that the SSM is not a methodology. Both of these are methods embedded in a unique approach and so it is also a mindset. The essence of GST, originally developed by Ludwig von Bertalanffy, is to consider what we can conclude if we do not assume anything about the object of our inquiry apart from it being a system. For example, if our system is a forest, we can look at what happens to wolves and rabbits. We find that wolves eat rabbits. Then we can know that there will be an equilibrium status of wolf and rabbit numbers because, if there are too few rabbits, wolves will die of hunger and rabbits can multiply and so forth. Such an approach can be extremely useful e.g. it led to the recognition that the number of relations escalates incredibly with the increase of the number of elements:

“Consider, for a simple example, a directed graph of N points. Between each pair an arrow may exist or may not exist (two possibilities). There are therefore 2N(N-1) different ways to connect N points. If N is only 5, there are over a million ways to connect the points. With N=20, the number of ways exceeds the estimated number of atoms in the universe.”

Total System Intervention (TSI), developed by Robert L. Flood and Michael C. Jackson, for handling multiple interrelated systems, uses metaphors to indicate what level of complexity is assigned to a particular considered system from a particular aspect in a particular situation. For example, if we want to solve a production problem maybe we can use the machine metaphor for the financial department (to represent a rather simple relationship, such as invoicing), the political metaphor for the management (describing power-play) and the organic metaphor for the shop-floor (representing cohesion, competition, collaboration, etc.).

It is possible to conceptualise further ‘even softer’ methods; these would include writing a poem, painting a picture or creating a symbol to describe a problem. One approach that is gaining popularity is organisational storytelling, or corporate mythology. This means telling stories within and about the organisation (or about the information system for that matter). While the scholarly literature on this is quite limited, it would be difficult to deny its importance. In organisations, such as IKEA, there are stories about the founder(s) that communicate and reinforce the organisational value system. In terms of information systems it is at least curious how much our phones and tablets today resemble what we could see in the Star Trek in the 1970’s…