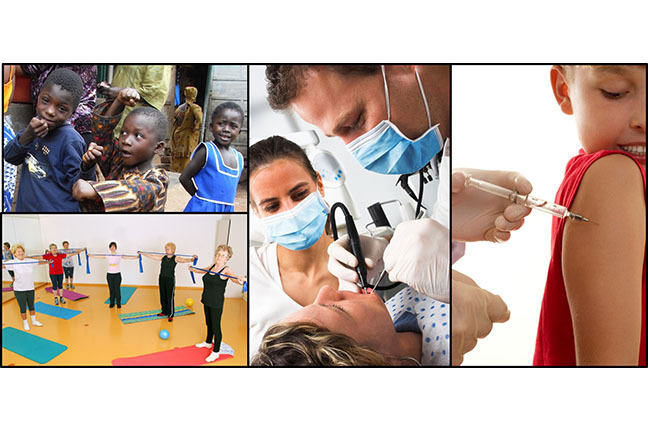 This week we’ve asked you what you think of when you picture health research. We also showed you some responses from members of the general public. When we were talking about it with colleagues here at Cardiff University most of them said “test-tubes”, “people in white coats”, “microscopes” and other similar laboratory-related images. When we went online, those were what we found in picture libraries and in search engine results.

However, the vast majority of research that involves testing treatments on people doesn’t happen that way. If you are taking part in a trial you could be doing any number of different things. Examples include: exercising, eating differently, reading a book, being given some advice, counselling or education, playing a video game, taking a pill, receiving a vaccine, having a surgery, getting acupuncture, using a particular device or piece of equipment. Equally you might be doing nothing, taking a sugar pill (placebo) or having ‘usual care’.

As the authors of a very helpful online resource make clear,

Not all evidence is created equal: some tests of treatments are more reliable than others.

Sometimes tests of treatments can be biased in favour of a particular result, sometimes the results occur by chance, and sometimes they are asking the wrong question in the first place. [Testing Treatments Interactive]

In the last few weeks we’ve looked at external factors that can influence research such as funding and conflicts of interest. There are also a range of internal factors about the methods used to conduct the study which reduce the possibility of bias. We looked at a range of difference types of bias in Week 1. Well conducted clinical trials will do as much as possible to eliminate these forms of bias.

How does this relate to your understanding of health research?