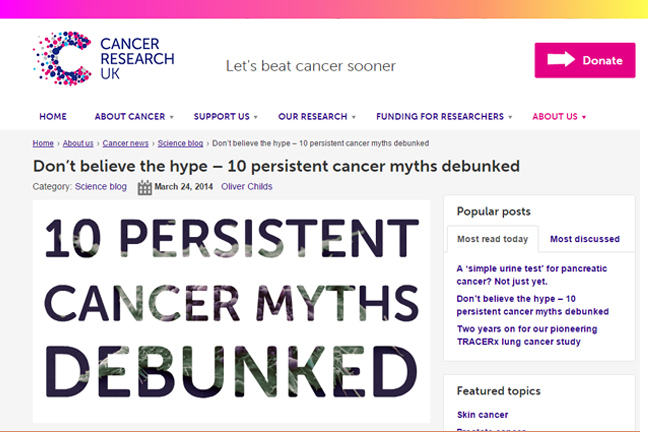 We interviewed Henry Scowcroft, Senior News and Multimedia Manager with Cancer Research UK, about the charity’s highly influential Science Blog and how challenging myths - and communicating accurate information about risk - have been major aims.

Why did you start the blog?

Newspapers and television news are still massively important. People still trust the mainstream media over Twitter and Facebook as places to get news. If you want to disseminate your information, you have to work with them. But we started thinking that there was more of a story to tell beyond the space that mainstream media gave us.

We had four objectives at the beginning of it all.

Our first was to be able to communicate directly with people without having to go via mainstream media. You might have less reach that way, but you do often benefit from more direct and useful communication. The blog also enables us to talk about our research in a more friendly way than the fairly dry language that we might use at times on the website.

The second one was to supply context to what was going on in the media.

The third one was to influence the narrative about cancer. And we could see that was being achieved when we started seeing our blog posts being used on Mumsnet - in discussion forums with mums talking to each other about childhood leukaemia. We were influencing the debate about cancer.

The fourth was about reputation management for the charity and being able to put our side of the story out there.

What has the blog taught you about what information people want?

We’re asked questions on social media that are not perhaps the things that we expected people to be concerned about. So we’ve been able to write blog posts on issues that people want to know about, and answer people’s questions.

For example, one of the most successful posts we’ve ever put on the CRUK blog is about cannabis and cancer. There’s a widely held myth and conspiracy theories about access to cannabis and medical cannabis and research that purports to show that cannabis can treat cancer. All of this research has been done in mice and there’s very limited patient data of any kind. We’ve seen that blog post get retweeted and reposted and shared. It crops up again and again in discussions on the internet.

And another big post that’s been very popular is a collection of the most frequent cancer myths - can bicarbonate of soda cure cancer, is cancer a fungus, do sharks get cancer? We debunk the myths and the post has passed one million views, making it our most viewed post to date - so it’s clearly resonated with people.

How do you communicate issues around risk? How is your account different from mainstream media?

The media are obviously interested in what causes cancer and what affects cancer risk, because this plays into what people want to know about and what they can do themselves to avoid cancer.

But the fact is that the evidence base for all of this is fairly static. We know that stopping smoking is the most important, modifiable factor that people can do something about. Maintaining a healthy weight, not drinking too much alcohol, keeping physically active and eating a healthy diet are also important. This doesn’t really change because it stems from decades’ worth of research. From a media point of view, there’s nothing new there. So anything that does come along that looks new, that sounds new, that shows a new association will interest journalists.

Sometimes research studies will show a significant association between perhaps cancer and a certain drug or behaviour - but of course, it’s just one study. We’re trying to help people understand that you need all sorts of evidence to overturn the decades of research knowledge that we already have. You need huge amounts of new data to be able to say for sure that something is going to overturn what we already know.

Everyone would love to know if there was something they could just add to their diet that would make a huge difference. Sadly, the evidence doesn’t really support that. What we know is that a very balanced diet, plenty of fruit and veg, low in meat - red meat particularly - but balanced, is what studies support as being associated with lower chances of developing cancer. So it’s highly unlikely that any cancer-beating ‘superfood’ will be discovered in our diets that we didn’t know about. In fact the term ‘superfood’ is very much a marketing tool used to sell products to people. Ultimately, people can make changes to their lifestyles and make a difference to their cancer risk.