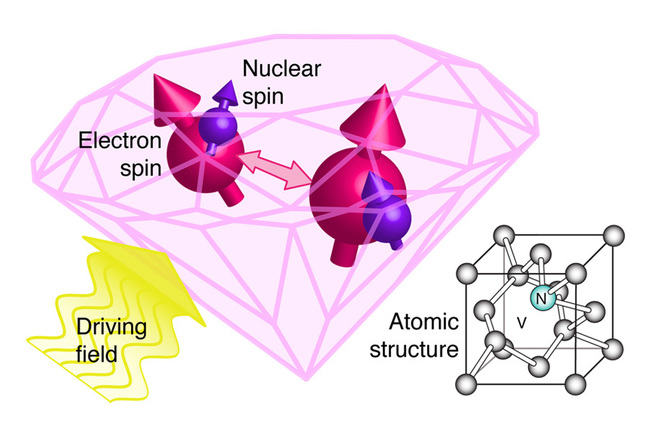 Many materials are atoms arranged in a regular crystal. When an atom is missing, or is replaced with a different kind, that uniform arrangement is broken. The change in the number of protons in the nucleus there alters the amount of attraction that electrons feel, so a single electron can be trapped there. Because the energy levels change, the wavelength, or color, of the light absorbed and emitted changes, leading to the name color center. For quantum computing, replacing a single carbon atom in diamond with a nitrogen atom creates a useful color center.

The ground state of an NV center is known as a spin triplet, which, rather than just two states (e.g., spin up and spin down), has three states, known as \(+1\), \(0\), and \(-1\). We can make a qubit out of this by using only two of them. As with some of our other technologies, we can control the state of our qubit using pulses of microwaves.

NV centers also emit photons that are in the visible light range. If we can get two NV centers to emit a photon at the same time, we can entangle the two NV centers over some distance

Diamond made of natural carbon includes some amount (about \(1\%\)) of an isotope of carbon, \(^{13}C\), that has a spin in its nucleus. If a \(^{13}C\) atom is near our NV center, we can exchange the state of the NV center with the nucleus, and have two qubits instead of one. The nuclear qubit is slow to react to external forces, and so it has a long lifetime.

Unlike quantum dots and superconducting systems, NV diamond potentially can work at room temperature, though many experiments are done with cryogenic but not near-absolute zero temperatures. The visible light photons are easier to capture and detect than longer-wavelength photons. NV diamond is considered a very attractive technology for building quantum networks.

The biggest drawback to NV diamond is the difficulty of fabrication. Researchers either look for naturally-occurring defects in diamond, or fire atoms at a piece of diamond at high energy, creating defects in the lattice. Placing them accurately is still a major challenge.