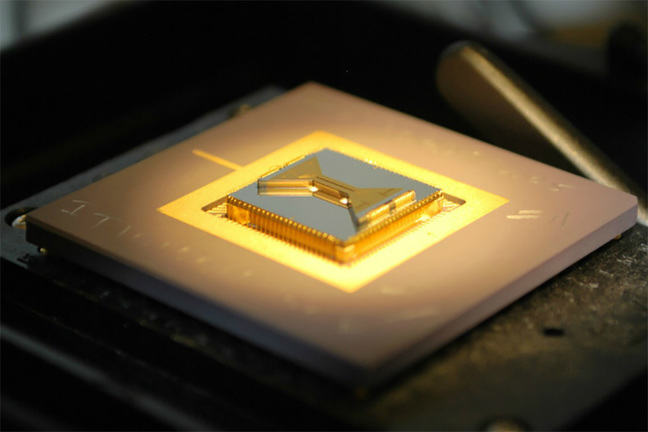 Recently, we saw that the energy levels of atoms, either the simple energy levels or hyperfine splitting, can make an attractive qubit. But atoms are not usually found in isolation; they are part of materials with many atoms, whether solid, liquid or gas. Isolating and controlling individual atoms requires some thought. How can we build such a system?

Ions in a vacuum

An atom is normally electrically neutral, with the same number of electrons in orbitals as the nucleus contains. However, if we strip off (or add) one electron, the atom becomes positively charged. Such a positively (or, less commonly, negatively) charged atom is called an ion.

A positive ion will be attracted to a negatively-charged material, or can be controlled using electromagnetic fields. If we put the ion in a vacuum, we can isolate it from other atoms, and suspend it in midair (well, mid-vacuum) using electrical and magnetic fields. We call this an ion trap. An atom in an ion trap becomes a nearly completely isolated, ideal qubit.

The first form of ion trap was invented by Wolfgang Paul, using a combination of four electrical fields, each coming from a wire or razor blade-shaped electrode. Two of the fields are unchanging while the others oscillate at radio frequencies, creating a standing wave electrical field that keeps the ion in one place. These electrodes might be a centimeter or two in length, and are arrayed in parallel a few millimeters or less apart. A side view of a trap from Innsbruck, with a one-euro coin for scale, is below.

The trap is placed in a vacuum chamber (generally tens of centimeters across, though researchers are working on much smaller chambers) with fewer atoms per cubic meter than the vacuum of outer space at the altitude of the International Space Station.

This kind of trap can hold more than one ion, spaced a few microns apart in a line, where the standing waves create stationary points. Up to fourteen atoms have been trapped in this fashion and used as qubits.

The ions can be controlled by pulses of laser light fired in from outside the chamber, through a window. Different wavelengths of light are used for different purposes, such as keeping the atoms cool, executing single-qubit gates, or measuring the ions. A common way to measure the qubit is to use fluorescence, causing the atom to absorb a photon and re-emit it so that we can see the ion by the light it emits. The laser light used is tuned so that, for example, the \(|1\rangle\) state fluoresces but the \(|0\rangle\) state doesn’t.

Of course, we also need two-qubit gates. In ion traps, we can adjust the electromagnetic fields to cause two atoms to come together and vibrate together. If we let them vibrate for a certain period of time, the two atoms will completely exchange their states. It we let them vibrate for half that time, they will partially exchange their states, leaving the two ions entangled in a fashion that we can use to build a CNOT gate. A separate approach is to couple ions that are far apart using light emitted by one or both of them.

Of course, fourteen qubits is an extraordinary accomplishment, but isn’t nearly enough for running interesting quantum algorithms, let alone doing so with complicated error correction (discussed later). A newer approach known as a surface trap scales much better. A surface trap is pictured at the top of this article.

A surface trap uses many small electrodes, tens or hundreds of microns across. Each electrode can be individually controlled to create a small electromagnetic field nearby. Set in a line, we can push and pull individual ions that are suspended in the electromagnetic field above the surface of the trap (hence the name). We can move the atoms around, bringing them together or separating them as we wish. The electrodes can be arranged so that the ions can be moved along paths in two dimensions, allowing qubits to interact with each other.

Because the ions are suspended in a vacuum, rather than part of a solid material, they are easier to isolate from their environment than quantum dots or superconducting qubits, which are subject to decoherence caused by unwanted interactions with other electrons and nuclei in the material. Thus, trapped ion qubits have very long lifetimes, up to about a minute, orders of magnitude more than any other type of qubit. Because we can control laser light well, the gates are also very high fidelity. Ion traps are the leading platform for demonstrating quantum algorithms.

Challenges for ion traps are scale, infrastructure and timing. (Both scale and supporting infrastructure are challenges for many technologies, as we have seen.) Even the more compact surface traps are very large, compared to transistors, and the vacuum chambers are still large, so the density of qubits per cubic meter of lab space is a challenge. One group of researchers recently proposed a design for an ion trap system that would cover an entire football field with a modular ion trap system that requires an ultra-high vacuum across the entire system. Infrastructure for producing and routing many laser beams will be a demanding engineering challenge. Finally, moving ions from place to place in order to conduct two-qubit gates is time consuming, so that gates will be orders of magnitude slower than some of the solid-state systems. The advantages in fidelity may allow use of weaker error correction and offset that disadvantage, however.