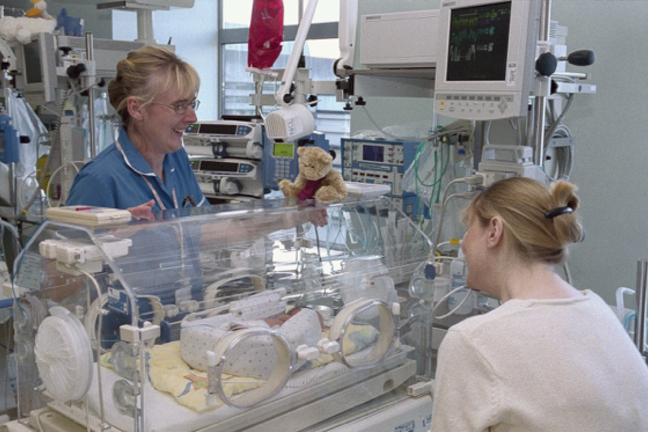 An healthcare worker and mother next to an incubator in a special care baby unit.

Infectious diseases can spread quickly in a hospital environment, particularly if the pathogen that causes the disease is resistant to the drugs relied on to fight it. Genomics might be able to help us track these resistant pathogens and intervene before they become widespread.

The bacterium Staphylococcus aureus has many faces. Many of us happily live our whole lives with S. aureus present on our skin or in our noses and experience no problems. But if the bacteria get further into the body they can cause health problems. In 2012, S. aureus was associated with 292 deaths in the UK.

The Rosie Hospital in Cambridge, UK is home to a special-care baby unit (SCBU), which cares for babies that have been born early or with a low birthweight, as well as babies that are recovering from a difficult delivery, infection or surgery. These babies are vulnerable to infection, therefore swabs are taken on admission and then every two weeks to monitor if they come into contact with any bacteria that could cause infections.

In 2011, three babies on the unit tested positive for MRSA. Although none of these babies were unwell as a result of the presence of MRSA, this prompted an investigation by infection control. An MRSA sample from each baby was tested against different antibiotics to determine its antibiotic resistance profile. This type of test is called an ‘antibiogram’. If samples of MRSA are resistant to the same antibiotics, then they have the same antibiotic resistance profiles and are therefore more likely to be the same strain of bacteria. In this case, two of the MRSA samples had the same resistance profile and one of them differed by resistance to one antibiotic. The hospital decided that the MRSA cases were probably connected; therefore, they carried out a deep-clean of the ward and investigated all MRSA-positive swabs taken during the previous six months. During this period a total of 14 cases of MRSA were identified. Nine of the cases had the same, or similar, resistance profiles to the original outbreak, and five cases had different profiles, so were considered unrelated.

The 12 related MRSA cases appeared in three clusters separated by 17 days and 33 days. Normally with transmission on a hospital ward, bacterial infection is passed directly from one person to the next with no noticeable gap, so these gaps of several weeks made it difficult to know if this was a single outbreak or several separate outbreaks.

At this point, scientists from the Wellcome Sanger Institute used DNA sequencing to explore the outbreak in more detail. By comparing the genomes of each of the isolates, they found that two of the five cases originally considered unrelated on the basis of their antibiograms alone were in fact related. They were also able to confirm that the three MRSA clusters were not separate but linked together in a single, ongoing outbreak. The question was why were there gaps of many days between them? It’s possible that the MRSA was being transmitted by someone working on the SCBU but further evidence would be needed to confirm this.

More than 100 people who had worked on the baby unit were asked to provide a swab for DNA analysis. It is common for S. aureus and MRSA to be carried by people without any ill-effects so healthcare workers can sometimes unwittingly carry the bacteria. Out of all of the samples taken from staff, one tested positive for MRSA. When DNA from that isolate was sequenced, it confirmed a link to the MRSA cases in the baby unit, suggesting the healthcare worker was the source of the most recent case on the ward. The pattern of cases in the outbreak is shown below.

The MRSA clone involved in this case was investigated further and was found to be type ST22, a strain of Staphylococcus aureus commonly found in UK hospitals. When the scientists looked in more detail at the isolates of ST22 found in the baby unit they realised they were actually more closely related to strains found in South Asia, particularly India. It is only through DNA sequencing that they were able to find this out!

Take a look at the UK National Health Service’s policy and recommended practice for infection control: Healthcare Associated Infections at Cambridge University Hospitals, the site of the Rosie Hospital, and the National Patient Safety Guidance for improving safe patient care.

In the comments area, share what procedures are in place to control the spread of infections in your local hospital. Identify good practice, share and comment on how patient protection is being improved.

This article was adapted from: http://www.yourgenome.org/stories/tracking-superbugs © Genome Research Limited 2017