This content is taken from the University of Reading's online course, Small and Mighty: Introduction to Microbiology. Join the course to learn more.
View course
1.11

How do microbes grow and replicate?

Bacteria and archaea reproduce asexually by splitting one cell into two equal halves in a process called binary fission (Figure 1). Before a cell divides, it must first replicate the genome so that each daughter cell gets a copy of the DNA instruction manual. Prokaryotes do not undergo sexual reproduction, but as we will see later in the course, they are able to exchange genetic information through other processes.

The diagram above shows the process of binary fission.

Under optimal growth conditions, the bacterium Escherichia coli divides once every 20 minutes. If it takes 20 minutes for a single cell to divide and produce two cells: after 40 minutes there will be 4 cells; after 6 hours there will be 262,144 cells; after 12 hours the population will soar to 68,719,476,736 cells. You may like to watch this video on Wikimedia.

Many unicellular fungi, like the Brewer’s yeast Saccharomyces pombe, also replicate asexually by a process similar to binary fission. In eukaryotes the DNA genome is packaged in chromosomes within the nucleus and so the process of asexual replication in yeast looks a bit more complicated than binary fission in prokaryotes. The first step is to replicate the chromosomes to form two copies of each chromosome (two sets of sister chromatids), which are then separated to the two poles of the cell via the process of mitosis (Figure 2).

The diagram above shows the process of mitosis in eukaryotic cells.

Other unicellular fungi, like the Baker’s yeast Saccharomyces cerevisiae, replicate in a different asexual process called budding. A daughter cell grows out as a small bud from the mother cell, which starts to replicate the chromosomes via mitosis. The daughter cell receives one of the two nuclei generated via mitosis and a few membrane-bound organelles and then separates, leaving a scar on the surface of the mother cell (Figure 3). 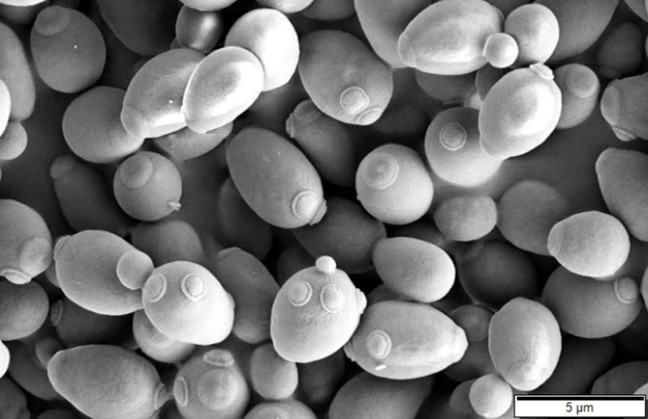 Under conditions of stress, some yeasts can switch from asexual to sexual reproduction (Figure 4). Saccharomyces cerevisiae cells are either mating type a or mating type \(\alpha\) (alpha) which produce different signalling molecules (pheromones). This species of yeast has 16 chromosomes, and a single cell either has one copy of each chromosome (haploid) or two copies of each chromosome (diploid) in the nucleus. When a haploid a-type and haploid \(\alpha\)-type cell meet they recognise the pheromones produced by the other mating type. This triggers them to join together (fuse) to form a diploid cell with 32 chromosomes (2 copies of each chromosome, one from a and one from \(\alpha\)). This diploid cell can either replicate asexually by budding, and remain as a diploid or undergo meiosis to form four haploid spores. When conditions become more favourable, the spores germinate into haploid cells that then start to reproduce. 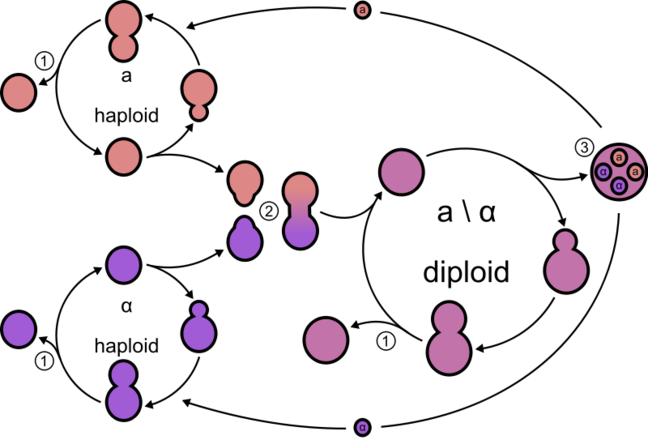 The diagram above shows the asexual and sexual reproduction cycles in a budding yeast:

Protists are a varied group, made up of all the eukaryotes that aren’t fungi, plants or animals. They use a range of mechanisms to reproduce. The majority replicate via asexual binary fission, including Giardia (Figure 5) and amoeba (Figure 6). Other protists undergo asexual reproduction via multiple fission, budding or spore formation. Some protists undergo sexual reproduction when they encounter stressful environmental conditions or as part of complicated life cycles in different hosts. One such example is Plasmodium, which causes malaria.

The amoeba in these SEM images are replicating by binary fission. You can see they have plenty of pseudopodia, like the amoeba in our 3D model.

In order to replicate, viruses need to infect a host cell and hijack the host machinery to make many copies of the viral genome, and lots of viral proteins which are then assembled into new virus particles. There are six main stages in a typical virus replication cycle

You can see an overview of the influenza replication cycle in Figure 7. Influenza virus attaches to receptors on the surface of a human cell via a viral spike protein called Hemagglutinin. The virus particle is taken into the cell via endocytosis and the viral nucleocapsid is transported into the nucleus. The viral RNA genome is transcribed into viral mRNA and replicated in the nucleus. Viral proteins are produced from viral mRNA using host ribosomes in the cytoplasm and the viral spike proteins are incorporated into the host cell membrane. When newly formed viruses are released from the cell by budding, they acquire a lipid envelope from the host cell membrane embedded with viral spike proteins. 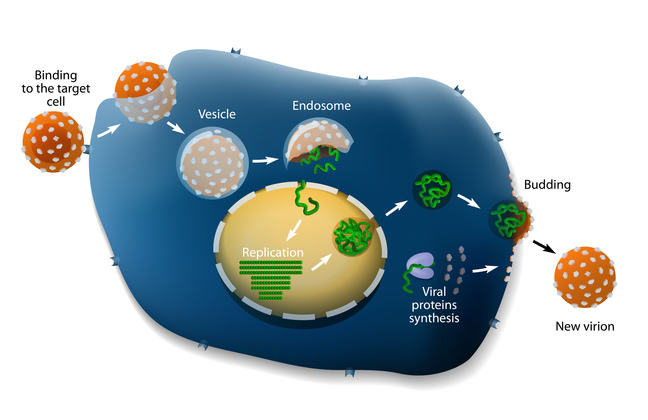 Viruses obtain the building blocks and energy they need to complete their replication cycle from the host cell. In the next few Steps we’ll explore the types of nutrients cellular microbes need to fuel their own growth and replication and the many different places they get these from.

This introductory course will show you the power of bioinformatics to explore bacterial DNA and bacterial and pathogen biology.