This content is taken from the University of Reading's online course, Small and Mighty: Introduction to Microbiology. Join the course to learn more.
View course
1.14

0:15Skip to 0 minutes and 15 seconds Microbes may be invisible to the naked eye, but they live in every environment on Earth.

0:25Skip to 0 minutes and 25 seconds Cellular microbes need energy and nutrients to grow and reproduce.

0:42Skip to 0 minutes and 42 seconds They live together in communities, but they’re not always very neighbourly. They often have to compete for limited nutrients. The more nutrients they get, the faster they can replicate. Some engage in chemical warfare to gain the advantage. They produce antimicrobials that either kill or inhibit the growth of their competitors. But if they become resistant to the antimicrobials, they regain the advantage.

1:17Skip to 1 minute and 17 seconds Genetic exchange can lead to the rapid spread of antimicrobial resistance through a microbial community.

1:36Skip to 1 minute and 36 seconds Other microbes directly exploit microbes as a food source.

1:42Skip to 1 minute and 42 seconds Certain species of amoeba capture bacteria, digest them it enzymes, and absorb the nutrients to fuel growth and replication.

1:54Skip to 1 minute and 54 seconds But it’s the viruses that have mastered the art of exploitation. Bacteriophages– or phages for short– are viruses that infect bacteria. Many phages have a head-tail structure, like bacteriophage T4, which infects E. coli. It has a protein coat which protects the DNA genome when it’s in the environment.

2:24Skip to 2 minutes and 24 seconds It attaches to receptors on the surface of the host bacterial cell and injects its genome into the cytoplasm. The host machinery makes copies of the virus components. The viral proteins assemble and the genome is packaged inside.

2:47Skip to 2 minutes and 47 seconds The host bacterium bursts open releasing hundreds of new phages into the environment. But bacteria are not helpless victims of this attack. They have evolved a variety of ingenious ways to defend themselves against viruses. Some make restriction endonucleases to destroy the viral DNA.

3:10Skip to 3 minutes and 10 seconds Also, if a bacterium acquires a mutation that changes the surface receptor, this may prevent the bacteriophage attaching and protects it from infection. But of course, the viruses evolve countermeasures to avoid these defences.

3:30Skip to 3 minutes and 30 seconds It’s a never-ending arms race. There’s a lot more going on in the hidden world than you might think.

Most environments are inhabited by a community of different microbes, all competing to gain the nutrients they need for growth and reproduction.

Microbes have been at war with each other, competing to access these nutrients for millions of years. Many have evolved ways to make chemicals that inhibit the growth or kill other microbes. In response to this chemical attack, microbes have evolved ways to resist the damaging effects of antimicrobials (you will learn more about antimicrobials and resistance in Week 3).

Viruses are the most numerous biological entities on Earth, estimated at 1 x 1031 virus particles (which is equivalent to 100,000,000,000,000,000,000,000,000,000,000), which is more than the number of stars there are estimated to exist in the universe. Many of these viruses are bacteriophages that infect bacteria and archaea in our oceans. They are so big that they can be seen using a light microscope. The scientist who discovered the first giant virus, mimivirus (Figure 1), initially thought it was a bacterium. These giant viruses can even be ‘attacked’ by other, smaller, viruses, called virophages. 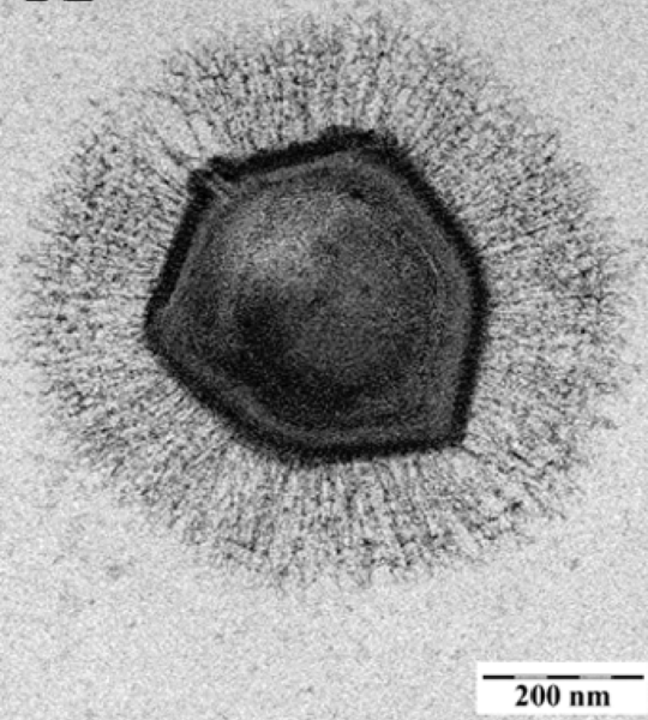 And as you can see in the animation, microbes have evolved a range of defence mechanisms that help to protect them against viral infections. You may want to read more about this in the further reading on the ViralZone, below.

This animation was created by Chris Lewis, Izzy Bahrin and Raj Bhogal, undergraduate students from the University of Reading’s Typography and Graphic Communication department.

Remember to ‘mark this Step as complete’ before moving to the next Step.