This content is taken from the University of Reading's online course, Small and Mighty: Introduction to Microbiology. Join the course to learn more.
View course
3.3

When there is an unexpected increase in the number of cases of an infectious disease circulating within a community we refer to an outbreak as an epidemic. If the outbreak is a new disease that spreads over a large geographic area, affecting multiple countries in different continents it may then be referred to as a pandemic.

There have been many notable epidemics and pandemics throughout history that have caused major loss of human lives. You’ll explore some of these in this Step and consider which pathogen was responsible and what is known about how each disease emerged and spread.

The first documented pandemic occurred during the reign of the Roman Emperor Justinian I and although the exact death toll is uncertain, historical records indicate this plague claimed the lives of millions of people in Europe and Asia. DNA sequencing of teeth from exhumed skeletons discovered in 6th century burial sites in Germany support the hypothesis that this plague was caused by the bacterium Yersinia pestis. 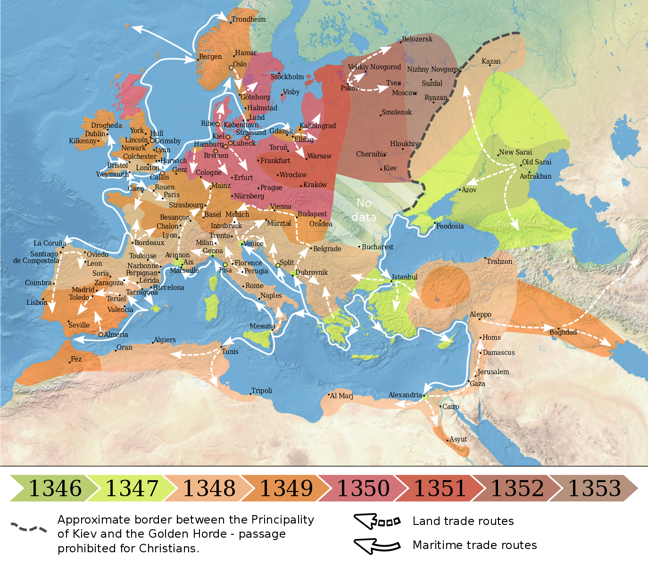 Figure 1: Spread of the Black Death along trade routes from Asia into Europe during the 14th Century. © Flappiefh CC BY-SA

The Black Death was an epidemic caused by Yersinia pestis that began in China in 1334 and swept across Asia via trade routes, peaking in Europe in 1346-1353 (Figure 1). This was the beginning of the second plague pandemic, which spread from Europe into the Middle East and North Africa leading to the death of hundreds of millions of people throughout the 14thto 17th century. 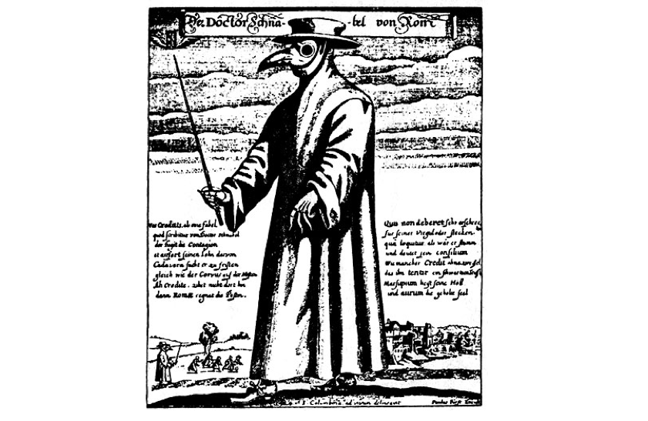 Figure 2: “Doctor Schnabel von Rom” (“Doctor Beak from Rome”); engraving, Rome 1656. Plague doctors wore a mask and cloak to protect themselves against the pneumonic form of the plague which can be transmitted from person to person via aerosolised droplets. © Paul Fürst (copper engraver) / Public domain

During the second plague pandemic physicians were hired to treat and record cases of plague in outbreak areas. They wore distinctive clothing consisting of a leather hat, waxed fabric cloak and a beak shaped mask with glass eye openings (Figure 2). The beaked mask was shaped in this way to enable it to be filled with strong- smelling herbs and spices, in accordance with the widely held belief that disease was caused by ‘bad air’ (the miasma theory of infection). It was not until 1894 that Alexandre Yersin discovered that bubonic plague was caused by the bacterium Yersinia pestis.

1665: The Great Plague of London, England 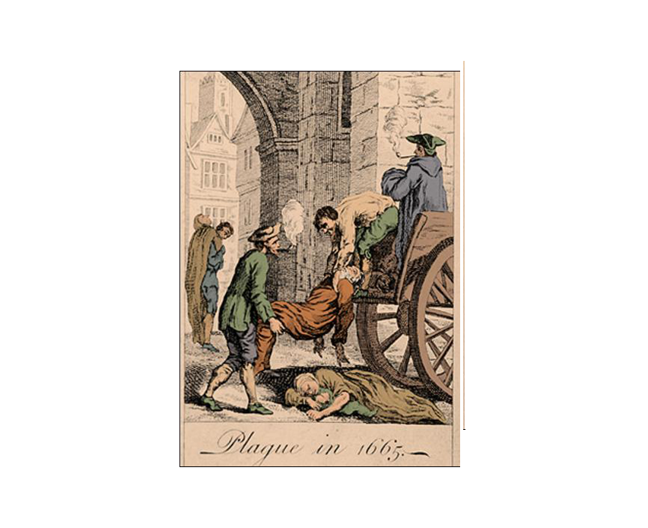 Figure 3: Collecting the dead during the Great Plague in London, 1665. ©Public Domain

One of the last outbreaks of the second plague pandemic occurred in London, England in 1665 causing the death of approximately 100,000 people; around a quarter of the population of the city at this time (Figure 3).

The first widespread pandemic caused by the bacterium Vibrio cholerae started near Calcutta in India in 1817 spreading throughout Asia and into the Middle East and North Eastern Africa. The exact death toll is uncertain, but British troops based in India recorded 100,000 deaths due to diarrhoeal disease at this time, suggesting the death toll was likely in the millions across all affected countries.

A second pandemic of cholera spread from the Ganges delta in India, this time into Asia, the Middle East, North Africa, Europe and the Americas. In England alone, this outbreak claimed the lives of at least 22,000 people.

Starting in China, bubonic plaque vectored by rodent fleas spread to India and Hong Kong leading to the death of an estimated 12 - 15 million people.

![Two diagrams. The first is a sketched street map which has black dots consolidated in one area. The second is a modern photo of a water pump with a pub in the background. (https://ugc.futurelearn.com/uploads/assets/67/bd/67bd7d5a-52a5-4cef-a9d7-3b1fe4729f40.png)

Figure 4. John Snow’s map of cholera cases (black dots) that he made in 1854 (left). He deduced that the outbreak was caused by contaminated water in the Broad Street Pump (right).© John Snow / Public domain and JustinC CC BY-SA 2.0

Regarded as the worst cholera pandemic on record, this outbreak began in India and spread globally causing huge loss of lives in Asia, Europe, Africa and the Americas. In 1854, the scientist John Snow made a breakthrough by determining the source of a cholera outbreak in Soho in London was contaminated water in the Broad Street Pump (Figure 4). He is now regarded as the founding father of epidemiology, a branch of medicine that studies factors that affect disease prevalence. Understanding how infectious diseases are transmitted within a population enables the development of successful containment strategies.

An outbreak of poliomyelitis (Polio) occurred in the USA with over 27,000 cases leading to the death of around 6000 people and thousands more left paralysed. 2000 deaths were recorded in New York City alone (Figure 5), primarily in the borough of Brooklyn.

Whilst the exact origin of the Spanish influenza pandemic is uncertain, we know that this strain was a new influenza virus (H1N1) that was transmitted to humans from birds. It rapidly spread between humans due to low levels of protective immunity and is estimated to have infected approximately a third of the global population claiming the lives of an estimated 50 million people within the space of one year.

Influenza virus has a segmented genome with eight different nucleocapsids enclosed within the viral envelope. If a single cell is infected by two different strains of influenza virus it can generate multiple combinations of genome fragments from the two viruses leading to rapid evolution of novel strains. This type of genetic reassortment between an avian (bird) influenza virus and a human influenza virus resulted in the emergence of a novel strain (H2N2) that caused another Influenza pandemic and the death of an estimated 1 to 2 million people globally.

Another genetic reassortment between a human H2N2 influenza virus and an avian influenza virus led to the emergence of a novel H3N2 strain. This was highly virulent and transmitted rapidly throughout Asia into North America and Europe, but the mortality rate was lower possibly due to pre-existing immunity to the neuraminidase (N2) component.

Genetic evidence shows that the HIV strain that has spread to cause a global pandemic first emerged in Africa through zoonotic transmission of Simian Immunodeficiency Virus (SIV) from chimpanzees to humans circa 1931.

The first reported epidemic caused by a novel coronavirus began in a food market in the Guangdong province in China in November 2002. Sequencing studies revealed this RNA virus was originally a bat coronavirus that had transmitted to an intermediate host, civet cats, before entering humans. International travel led to imported cases in several countries with a total of 8093 recorded cases and 774 deaths. This outbreak was successfully ended via contact tracing and quarantine of everyone that had been in close contact with SARS patients.

A second epidemic caused by another novel coronavirus emerged in Saudi Arabia in September 2012. Genetic sequencing studies revealed this virus had transferred from bats into dromedary camels and then into the human population. Since the first reported case there have been 2494 reported cases with 858 deaths, a mortality rate of 35%. In 2015 the largest MERS outbreak outside the Middle East was recorded in South Korea leading to 186 confirmed cases and 36 death.

The first reported case of Ebola was in 1976 in Zaire (now the Democratic Republic of Congo) in Central Africa. Multiple small outbreaks occurred in this region over the next few decades. In 2014 a major outbreak occurred in West Africa, leading to over 28,000 reported cases and 11,310 deaths. International travel of people exposed to the Ebola virus led to cases in several countries outside of West Africa, but effective contact tracing and quarantine measures eventually contained the transmission of Ebola by 2016.

The Zika virus was first discovered in Rhesus monkeys in Uganda in 1947, and the first human case reported in Nigeria in 1968. The Zika virus spread in infected mosquitoes from Africa into Asia over the next few decades. An outbreak of Zika fever occurred on the Pacific Island of Yap in Micronesia in 2007, and it reappeared on the other side of the Pacific on Easter Island and then in French Polynesia in 2013. It first appeared in Brazil in 2014 and continued to be transmitted to human by mosquitoes, progressing North into Central America. During the Brazilian World cup in 2015 it became clear that Zika virus could cause serious birth defects (congenital Zika syndrome) when contracted during pregnancy. The WHO declared an end to the Zika epidemic in November 2016, but its effects will last a lifetime for the families of children affected by congenital Zika syndrome.

You can find out more in this video on YouTube.

The first cases of a novel respiratory disease, Covid-19, occurred in Wuhan, China in December 2019. Within three months the outbreak had officially reached pandemic status due to international travel and sustained human to human transmission in multiple continents outside of Asia. Sequencing studies conducted in early January showed that Covid-19 is caused by a novel coronavirus named SARS-CoV-2 due to its close sequence similarity to SARS-CoV. This also indicates it is more closely related to a bat coronavirus than SARS-CoV, suggesting this could be the host reservoir from which the virus emerged, although it is possible there was an intermediate host responsible for the initial transmission into humans.

The London School of Hygiene and Tropical Medicine have created a course, COVID-19: Tackling the Novel Coronavirus hosted on FutureLearn.