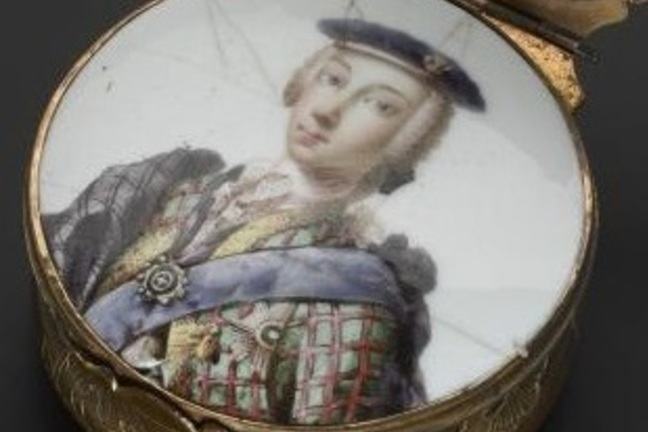 Circular snuffbox of pinchbeck with an inner lid enamelled with a portrait of Prince Charles Edward Stewart, the lid and base of hardwood decorated with grooves and wrigglework/H.NQ 470

Setting up court: the Palace of Holyroodhouse

The Jacobite army marched south unopposed and by 17 September 1745, they were in control of the city of Edinburgh – only the military garrison at Edinburgh Castle held out and remained loyal to the Hanoverians.

The prince arrived at the Palace of Holyroodhouse to loud cheers from his Jacobite supporters.

Andrew Henderson, a teacher at the Edinburgh High School, witnessed the prince’s arrival and described him as;

’a tall, slender young man, about five feet ten Inches high, of a ruddy complexion, high nosed, large rolling brown eyes, long visage, red-haired, but at that time wore a pale periwig. He was in Highland habit, had a blue sash, wrought with gold, that came over his shoulder.’

Wearing tartan and the Order of the Garter, Charles passed under the Stuart armorials carved over the palace doors and entered the home of his Stuart ancestors.

At noon on 17 September, James VIII and III was proclaimed King, and Charles was confirmed as Prince Regent.

Let’s pause and think about what this meant for the Jacobite cause – and for the Stuart dynasty. James VII and II had fled Britain in 1688 with his wife and infant son. Since then, the Jacobites had pursued four failed attempts – in 1689, 1708, 1715 and 1719 - to restore the Stuarts to the throne.

Here, now, was the young prince, the Young Pretender as he was known, setting up court at the Palace of Holyroodhouse; the first Stuart to take residence there since his grandfather, James VII and II between 1679 and 1682.

How do you imagine Prince Charles Edward Stuart was feeling as he took up residence in this royal palace – in the capital city of Scotland?

Can you imagine the reaction of his Jacobite followers, in Scotland, Britain and Europe?

We invite you to share your thoughts using the comments link below.

In our next step, Viccy Coltman looks at a portrait of Charles commissioned during his occupation at the palace.