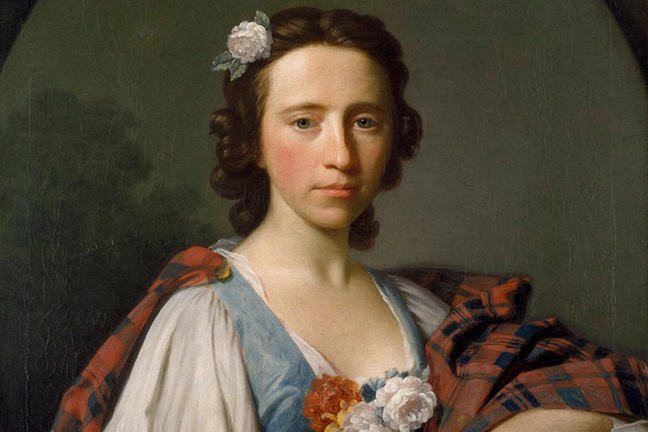 Over the sea to Skye

After the defeat at Culloden, Prince Charles Edward Stuart spent five months evading capture in the Highlands and Islands of Scotland before sailing to the safety of France.

Remember Richard Cooper’s ‘Wanted’ engraving that we looked at in Step 3.3:

’that any person who secures the son of the Pretender is entitled to a reward of £30,000’?

Regardless of whether they were Jacobites or not, no one Charles encountered during this period was willing to betray him for the price on his head.

Of all the people and places associated with the Prince during his final months in Scotland, 24 year-old Flora MacDonald is arguably the best remembered.

Flora met the Prince in June 1746. He had spent several weeks in the Highlands and Islands narrowly avoiding capture by Government troops.

One of the Prince’s companions, Captain Conn O’Neill, was a distant relative of Flora and asked for her assistance. The commander of the local government militia was Flora’s step-father, Hugh MacDonald.

From him, she obtained a travel pass for herself, a manservant, an Irish maid, ‘Betty Burke’, and a crew of six men.

They set sail for the Isle of Skye on 28 June with the Prince disguised as Betty Burke.

Once the party landed on Skye, it was arranged for the Prince to go to Portree then to the Island of Raasay.

The encounter between the Prince and Flora has become a dominant part of the romantic Jacobite legend.

The truth was she never saw him again.

Several days later, she was arrested and sent to the Tower of London.

Flora was released from prison in 1747 and in 1750 she married Allan MacDonald, a captain in the army. They emigrated to North Carolina in 1774 where her husband served with the British government during the American Revolution. She returned to Scotland in 1779 and died on Skye in 1790, aged 68.

We will see in a later section how the encounter between Flora and Prince Charles Edward was romanticised in the 19th century Skye Boat Song, with the lyrics:

Though the waves leap, soft shall ye sleep
Ocean’s a royal bed
Rocked in the deep, Flora will keep
Watch by your weary head.

We will also hear from Viccy Coltman about an object of material culture associated with Flora, which was later acquired by the author Sir Walter Scott.