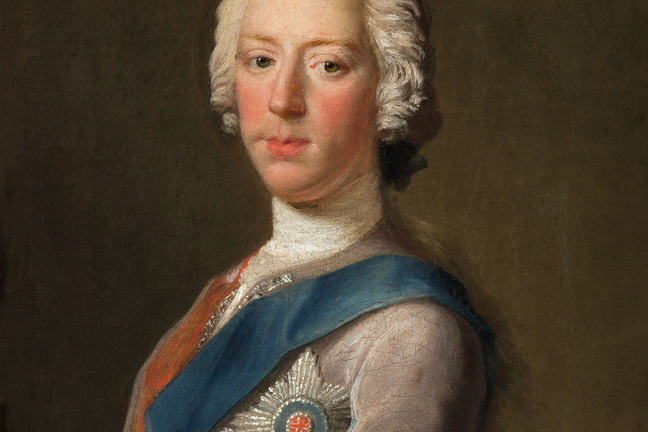 Some of the most iconic images and songs associated with Prince Charles Edward Stuart are posthumous.

In other words, they were actually created decades – even centuries – after his death in 1788. ‘Bonnie Prince Charlie’ particularly flourished in the creative imaginations of 19th century authors, painters, poets and musicians.

Afterlife in the arts

His story continues to inspire, most recently in the work of Diana Gabaldon, author of the popular Outlander novels and the associated television series.

The 19th century romantic imagery of Bonnie Prince Charlie has also been re-used countless times as a marketing tool. Printed on souvenirs and absorbed into the iconography of Bonnie Scotland, these images have helped create the popular character of Bonnie Prince Charlie – the tartan-clad Jacobite hero suspended in time, forever pursued through the Highland landscapes of Scotland with a price on his head.

In this final activity, we look at some of these representations of the Prince as the figurehead for the Jacobite cause.

As always, we welcome your suggestions of images, music or stories associated with the Prince that you have come across and that you would like to share – please use the comments below.

The Skye Boat Song is one of the most popular songs associated with Bonnie Prince Charlie.

Thought by many to have been written at the time of his escape, the song was actually published in 1884. Sir Harold Boulton wrote the lyrics set to a Gaelic air collected by Anne Campbelle MacLeod in the 1870s.

A 1892 poem by Robert Louis Stevenson – Sing me a Song of a Lad that is Gone – has also been set to the same music and was adapted as the theme tune for the Outlander television series.

The lyrics to Boulton’s song and Stevenson’s poem can be downloaded below, as a PDF.

In the next steps we explore the writing of Sir Walter Scott who, in the early 19th century was inspired by the story of Bonnie Prince Charlie and the Jacobites.