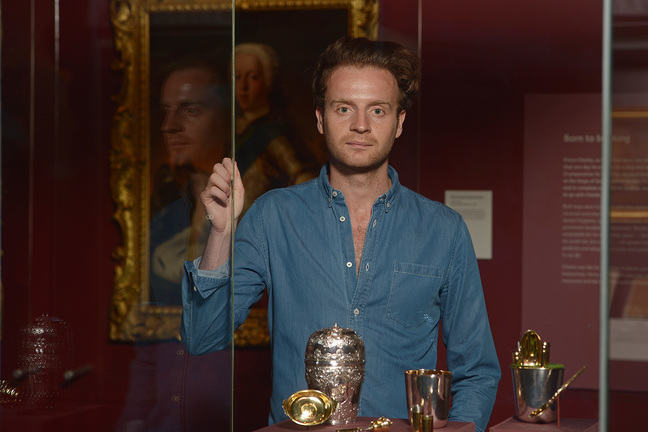 Actor Andrew Gower, who plays Prince Charles Edward Stuart in the Outlander TV series, at the National Museum of Scotland

We close our course with a look at the most recent Jacobite-inspired phenomenon, the historical time-travelling Outlander series of nine novels by the author Diana Gabaldon.

The female protagonist of Outlander is Claire Randall, a married, former World War II nurse, who in 1946 finds herself transported back to the Scotland of 1743. In the years immediately preceding the ‘45 Jacobite rising, she becomes embroiled with the fearless Highlander, Jamie Fraser.

Outlander has been developed for television by Ronald D. Moore and produced by Sony Pictures Television and Left Bank Pictures for Starz. It premiered on 9 August 2014 and in 2017, screened in the UK on Channel 4.

Shot on location in Scotland and England, the television series has generated huge interest with tours, trails and guides to the sites featured. Here is a link to the map.

Actor Andrew Gower, who plays Bonnie Prince Charlie in the series, with his trademark ‘mark me’ phrase, made a visit to the National Museums Scotland in the summer of 2017.

In this short film, Andrew talks about seeing objects, including the iconic silver canteen, in the exhibition Bonnie Prince Charlie & the Jacobites. Andrew explains that the canteen (or at least a copy of it) features in Season 3 of the television series.

In the next step, you’ll find a short audio extract of Diana Gabaldon in conversation with author Lin Anderson.