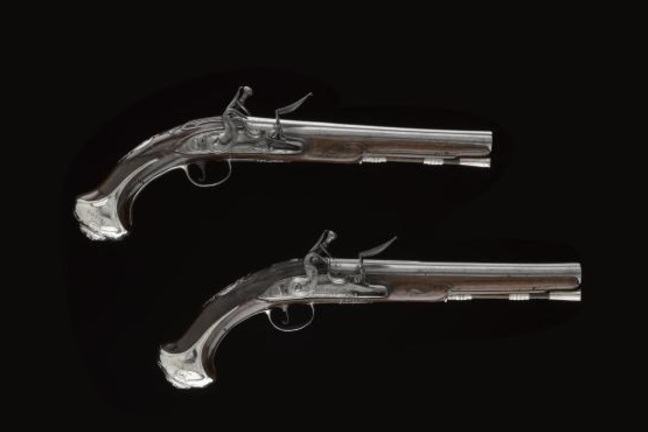 A pair of 'Queen Anne holster' pistols with silver mounts, engraved with 'AMD Clanranald 1712' and 'To AMD Dalelea 1715', by N. Atkinson of Lancaster

In 1603, James VI of Scotland had become James I of England, uniting the crowns of the two neighbouring kingdoms. Just over a century later in 1707, the Act of Union united the two parliaments – in what was perceived across much of Scotland as an unhappy marriage of unequal partners.

James VIII and III exploited this anti-Union discontent in an attempt to regain the throne. In 1708, he was supported by the French, who were at war with England and keen to distract their longstanding enemy on home ground.

The 1708 rising was a disaster, plagued by bad weather and sea sickness. The French invasion fleet accompanying James to Scotland arrived to find the Royal Navy already in wait for them!

The French commander refused to put a furious James ashore and the attempted rising fizzled out.

Fast-forward seven years – George, Elector of Hanover had succeeded Queen Anne to the throne. Remember, she had ignored James’s plea ‘prefer your own brother, the last of our line’ in favour of their distant relatives, the Hanoverians.

George I was unpopular; he even alienated former supporters of Anne. One of these, the Unionist Earl of Mar, threw in his lot with the Jacobites.

In September 1715, Mar began to raise forces to march south to join with English Jacobites, in an attempt to return a Stuart to the throne.

During this time, James VIII and III had to leave France as a condition of the 1713 Treaty of Utrecht. Louis XIV died in September 1715 and James lost the support of the French. The Jacobite court in exile had no permanent home until James was offered The Palazzo del Rei in Rome by Pope Clement XI in 1719.

But back in Britain, the Earl of Mar was leading a new Jacobite Rising…