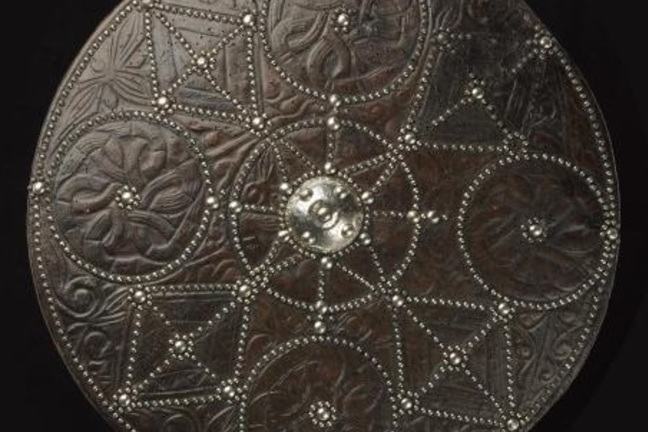 Targe, believed to have been carried by the 2nd Duke of Gordon, as Marquis of Huntly, at Sheriffmuir, 1715

Determined to restore the Stuarts to the throne and in opposition to George I, the Earl of Mar joined forces with English Jacobites.

In response to Mar’s actions, the government sent out a combination of Scottish and English regiments commanded by the Duke of Argyll.

The two armies clashed at Sheriffmuir, north-east of Dunblane, Stirlingshire on 13 November 1715.

Although the government army was outnumbered by the rebels by about 2:1, it was made up of regular soldiers fighting under an experienced commander.

The battle at Sheriffmuir was inconclusive with both sides claiming victory.

Listen to this Jacobite song, featuring some of the people we have already mentioned in the 1715; you can download the lyrics too from this link:

Will ye go to Sheriffmuir,
Bauld John o Innisture?
There to see the noble Mar,
And his Heiland laddies.
A’ the true men o the north,
Angus, Huntly and Seaforth,
Scouring on tae cross the Forth,
Wi their white cock-a-dies.

Will ye go to Sheriffmuir,
Bold John o’ Innisture?
Sic a day and sic an hour,
Neir was in the north man.
Siccan sichts will there be seen;
And gin some be nae mistaen,
Fragrant gales will come bedeen,
Frae the water o Forth, man.

In strategic terms, Argyll had halted the Jacobite advance, leaving them demoralized.

James VIII & III arrived in the north-east of Scotland in December 1715. He met with the Earl of Mar but failed to rally his disheartened supporters. The following January, he briefly set up court at Scone Palace, near Perth. On learning of the approach of government forces, he sailed for France, on 5 February 1716.

In the next two steps, we look at two objects that tell us more about the 1715 rising from the perspectives of both sides involved in the short-lived campaign.