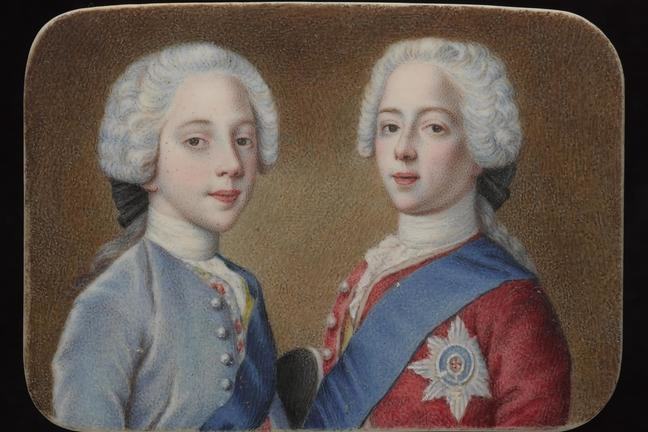 A rectangular miniature, watercolour on bone, of Princes Charles Edward and Henry Benedict Stuart/H.NT 246 - One of a collection of Jacobite relics amassed by Sir John Hynde Cotton and his descendants

What do we know about the princes during their boyhood in Rome?

Both boys were musical – John Hay, the Earl of Inverness and James’s Secretary of State wrote of Charles: ‘he is a great musician and plays his violin continually’.

When Prince Charles was only four years old, his father entrusted him to a Scottish Protestant governor, James Murray, causing the Prince’s Catholic mother, Maria Clementina, to leave the court and take refuge in a convent. A compromise was reached and the queen rejoined the court, but Murray remained Charles’s governor.

The Duke of Liria said of Charles: ‘Besides his great beauty he is remarkable for his dexterity, grace and almost supernatural address. Not only could he read fluently, he could ride, fire a gun; … He speaks English, French and Italian perfectly and altogether is the most perfect Prince I have ever met in my life’.

These were typical accomplishments for a European Prince – linguistic ability, equestrian prowess and marksmanship.

There is a charming letter written in 1728 by the seven-year-old Prince Charles to his father, James, from their Palazzo in Rome. It appears to be the young boy’s response to a reprimand for upsetting his mother by behaving too boisterously.

He writes, ‘Dear Papa, I thank you mightily for your kind letter. I shall strive to obey you in all things. I will be very Dutifull to Mamma, and not jump too near her…’.

Charles was apparently like his mother in nature, being prone to bouts of elation and melancholy.

Henry was much more like James, a quieter, measured boy with the same strong belief in his Catholic faith.

In the next step, we look at a third and final Jacobite medal, this one commemorating Prince Charles, the first-born and his brother, Prince Henry – the heir and the spare.