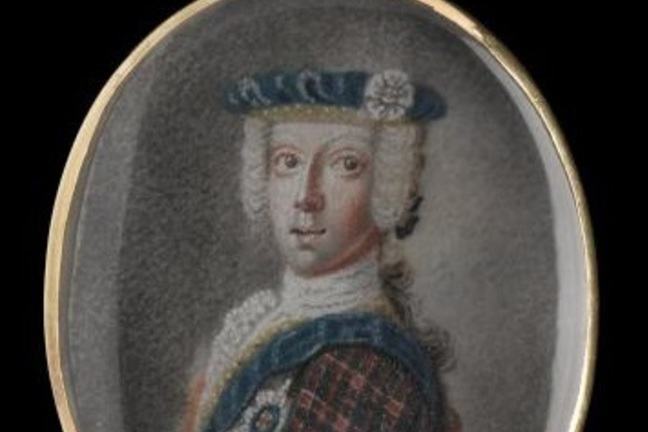 Locket consisting of an oval gold frame with a loop at the top containing a miniature of Prince Charles Edward Stuart, with four pieces of his hair gummed on the back/H.NA 631

By 1744, hostilities between Britain and France had escalated and the time seemed right for another attempt by the Jacobites to reclaim the British throne.

Louis XV was prepared to support an invasion. Prince Charles Edward secretly left Rome and travelled to France to lead the rising on behalf of his father, James VIII and III, who was by now 56 years old.

The plan was abandoned when a storm destroyed the French fleet.

After spending over a year petitioning Louis XV to finance another invasion attempt, Charles decided to proceed alone. Always impulsive and convinced that the Highland clans would rise to support him, he secured a ship to transport him and seven loyal supporters to Scotland.

The Prince and his party landed on Eriskay in the Outer Hebrides on 5 July 1745. Shortly after his arrival, the Prince met Alexander Macdonald of Boisdale, who warned him that many clans were unlikely to support him.

When told to return home he replied,

‘Sir I am come home… I am persuaded that my faithful Highlanders will stand by me’.

For a few brief months thousands of Jacobites rallied to the cause – providing Charles with the very real possibility of seizing the power which had been lost almost sixty years previously.

The Prince raised the Stuart standard (flag) at Glenfinnan, west of Fort William on the Scottish mainland, on 19 August – the final Jacobite rising had begun!

In 1815, an 18 meter-high monument was built at Glenfinnan with a statue of a lone, kilted highlander at the top providing a poignant reminder of the clansmen who gave their lives to the Jacobite cause. You can see the figure in our title board at the start of each film.

You can also visit this monument and other sites associated with the Jacobite cause in Scotland and follow this Jacobite trail.