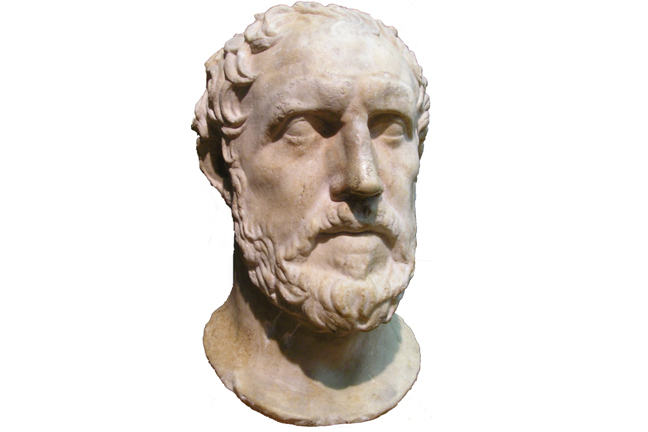 Photograph of bust of Thucydides at the Royal Ontario Museum

Why do men go to war? The question is as old as humanity itself, since the organized use of violent force by one group against another was one of the first products of human civilization, and, perversely, a prime impetus over the millennia to various “advances” in political development and organization (right down to the Internet). Even now in the 21st century, we are no closer to ridding ourselves of warfare than we were in ancient times. On the contrary, we continue to devise new weapons of unimaginable destructive force– nuclear bombs being only the most dramatic in apocalyptic reach.

Despite war’s place as a permanent fixture in human life and basic mode of interaction among states, historians, political scientists, and philosophers continue to debate the perennial question, why does war break out? One of the most enduring answers was provided by the ancient Greek historian Thucydides in his study of the Peloponnesian war. He reduced human motivation to three core concerns: fear, honor, and profit.

Over two thousand years later, international relations (IR) experts still argue vigorously within the Thucydidean framework. So-called “realists” emphasize the fear factor in driving states to war in order to achieve security, if not hegemony. Many IR “liberals” stress the role of material profit, and hope that by increasing economic interdependence the world might become a more peaceful place. Finally, IR “constructivists” see less rational forces– honor and pride among them– driving men to take arms. Historians typically borrow from all three schools in trying to understand particular conflicts, finding a messy mixture of Thucydides’ motivations in operation simultaneously.

When it comes to the Black Dragon War, Japan, Korea and China pursued different aims. In her masterly biography of Japanese leader Hideyoshi Toyotomi, Mary Berry cites his desire to improve Japan’s position in the trading system of East Asia—then dominated by China—as well as his insecurity at home with relation to rival samurai, who would be less threatening if dispatched to the battlefields of Korea. But Berry concludes that “honor” was the primary driver for Hideyoshi, a megalomanical sovereign who sought a kind of “immortality” by founding an Asian empire.

Hideyoshi’s Japan was the aggressor and initiator of the Black Dragon War on the Korean Peninsula, but his real target was Ming China, and Joseon Korea’s role was not foreordained. Initially, Hideyoshi seems to have hoped Koreans would allow free passage, and perhaps even support, for Japanese forces to cross the peninsula. The goal of the invasion, after all, was Beijing, where Japanese troops would topple the Ming and establish a new imperium in its place.

Korean King Seonjo, however, declared his fidelity to the Ming, and refused Hideyoshi’s demand. Seonjo likened Korea’s “inseparable relationship” to China as being akin to that of son to father and servant to master—the strongest bonds, as we will learn more about next week, in the Confucian ethical system. In his rigorous study of the war, military historian Kenneth Swope quotes Seonjo’s letter to Hideyoshi: “We shall certainly not desert our lord and father country and join with a neighboring state in her unjust and unwise military undertaking.” A Confucian sense of honor was therefore foremost in how the Koreans explained their position to Japan. But as Swope points out, Korea also enjoyed a de facto defense alliance with Ming China, and economically benefited richly from the “inseparable relationship” with the dominant economy in Asia. In other words, by all three of Thucydides’ measures, Korea’s side in a Sino-Japanese war seemed to be with Beijing.

And what about China? Why did the Ming emperor commit tens of thousands of soldiers and massive resources, at a time of great stress and insecurity, to the defense of Korea? Especially when Hideyoshi’s ultimate war aim of reaching Beijing was dimly perceived, and dismissed as fantasy? Answering that question helps us understand something fundamental to the China-Korea relationship, and is the topic of your next step.