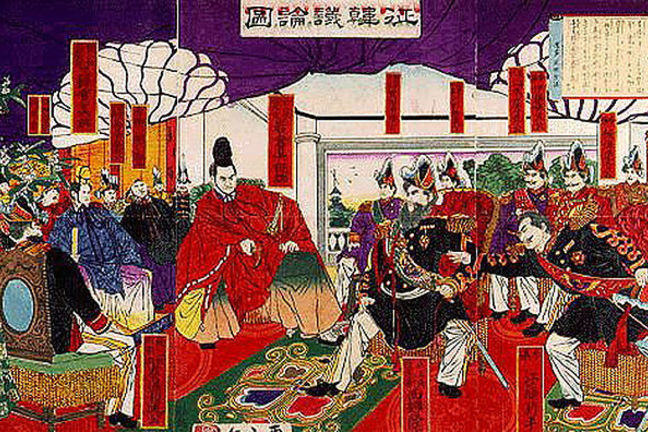 Remember back in week 1 when we learned about the concepts of “power transition” and “revisionist states” in the context of the Black Dragon War of the 1590s? Three hundred years later, East Asia’s revisionist outlier once again sought to challenge the established order. That order, the Sinocentric tributary system, was crumbling from within given China’s inability to stave off Western imperialist powers. Japan began to stir in the 1850s and by the century’s end decided to challenge Qing hegemony directly, choosing to go for the jugular by fighting on Korea.

Outside of “statecraft reform” circles that we learned about last week, Qing officialdom and educated elites were slow to appreciate the magnitude of their loss to the British in the first Opium War (1839-42). Watching from afar, Japanese were not just stunned at Chinese weakness, they also avidly read reformist writers like Wei Yuan who advocated integrating Western methods. In 1853, Western industrial might steamed to Japan itself in the form of U.S. Commodore Mathew Perry’s “Black Ships”, come to demand Japan’s “opening” on America’s terms.

The Perry shock emboldened adaptation efforts to master the new form of military and economic strength of Western powers. In 1868, Japanese elites came together in a dramatic reconstitution of the polity, a kind of conservative revolution called the Meiji Restoration. So-called in honor of the newly enthroned Meiji Emperor, symbol of national unity, the restoration systematized reforms to the political, economic, military and educational life of Japan. Meiji elites borrowed heavily from Western models, even as they promoted the notion of a unified national “essence” of what it was to be Japanese.

Reviving the emperorship was not only about reunifying the nation under a strong central leadership—it was also a direct challenge to the Sinocentric order in which there could be only one sun in the heavens. Once again, as China’s linchpin tributary ally, Korea was caught in the vise. The Joseon king refused to recognize Meiji as emperor, and Japanese ruling elites were incensed, most notably Saigo Takamori who became the leading advocate of seikanron —a punitive campaign against Korea. Saigo initially lost the debate at court to invade Korea, but the seikanron spirit lived on even after he died in a revolt against the imperial authority he’d helped set up in the first place (romanticized in the Tom Cruise film The Last Samurai).

An essential feature of Western powers’ formula for success was territorial expansion and imperialist aggression. As the West’s star pupil in the East, Japan first tested its growing muscle with a small-scale military expedition to the Qing-controlled island of Taiwan in 1874. Victory emboldened hawks, and the next year Japan sent a warship to probe the Yellow Sea side of the Korean coast, even landing a vessel on Ganghwa Island where Koreans had fought off French and US expeditions. Fighting broke out, and Meiji used the incident to demand a treaty that would open Korea on its terms. It was the first “modern”, ie, unequal, treaty negotiated among Asian nations, and a prelude to Japan’s aims on the peninsula.

Meiji continued to progress toward its avowed goal of “wealth and power”, and push against Qing hegemony on the Korean Peninsula. One means of prying Korea loose from Qing suzerainty was to support Korean reformers who wanted their own kingdom to adopt the Meiji model. In 1884, a decade after the fighting at Ganghwa , a group of Japanese-aligned intellectuals and officials staged a coup d’etat, which was only put down thanks to the intervention of Chinese soldiers garrisoned in Seoul. Japan and China negotiated protocols for a hands-off policy toward Korea at the subsequent Convention of Tianjin.

In reality both sides did their best to strengthen their hand on the peninsula, setting the stage for the next clash, to come in 1894, the Year of the Wooden Horse, or Jiawu war as it is still known in China.