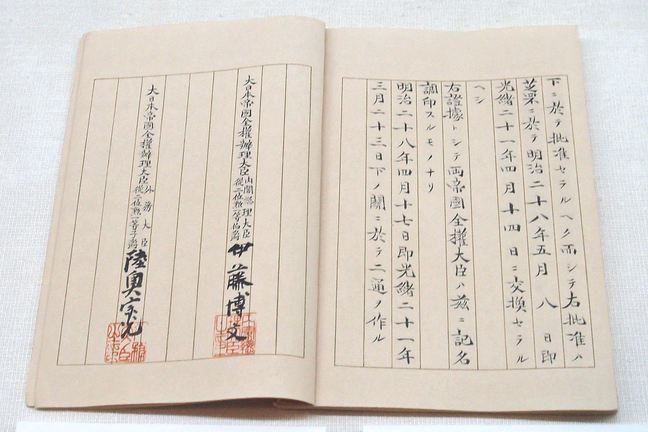 © By World Imaging, via Wikimedia Commons

The Qing-Meiji war over Joseon ended in the Sino-Japanese Treaty of Shimonoseki, so-named for the Japanese city where it was signed on April 17, 1895.

Shimonoseki was a humiliation, a loss of face, for Qing China on many levels. The mere fact of having to sign outside China was shameful—in an inversion of the Sinocentric geography of tributary hierarchy, now China had to send its envoy to a “barbarian” land to sue for peace. That envoy was China’s senior-most foreign affairs minister, Li Hongzhang. On his way to the negotiations one day, Li was fired upon by a Japanese extremist in a failed assassination attempt. Although Li survived the attack, the bullet lodged in his nose—making China’s loss of face literal. This at least constituted a mutual embarrassment, since the Meiji government had failed to protect Li, which the Chinese negotiating party used to their advantage in the final stages of treaty deliberation.

Yet even with these last stage compromises, Shimonoseki was a bitter, bitter pill for the Qing to swallow.

Not surprisingly, Article 1 struck the death knell for centuries of Sino-Korean relations of the great protecting the small and the small serving the great. The age of paying tribute was over. The treaty agreed, “China recognises definitively the full and complete independence and autonomy of Korea, and, in consequence, the payment of tribute and the performance of ceremonies and formalities by Korea to China, in derogation of such independence and autonomy, shall wholly cease for the future.” (See the full text for yourself in the related file).

Next was further loss of territory—the islands of Taiwan (Formosa) and the Pescadores became Japanese property. A huge chunk of Manchuria was similarly ceded, but Russia convinced France and Germany to join them in a “Triple Intervention” to force Japan to take money in lieu of land (Russia wanted Manchuria for itself). China also opened more “treaty ports”, including inland entrepots, to Japanese trading and consular prerogatives.

Finally, there was the bill for the war. The Qing agreed to pay Japan a whopping 200,000,000 silver dollars (taels) in reparations—money that China desperately needed for modernization at home, money that Japan would invest carefully in furthering its own industrial and military might.

Shimonoseki severed lips and teeth. The linchpin was removed from the grand edifice of a China-centered tributary East Asia. It’s a wonder the Qing survived another decade and a half before a military revolt toppled the fragile Manchu dynasty, and the Republic of China was declared in its place. Korea was even less fortunate.