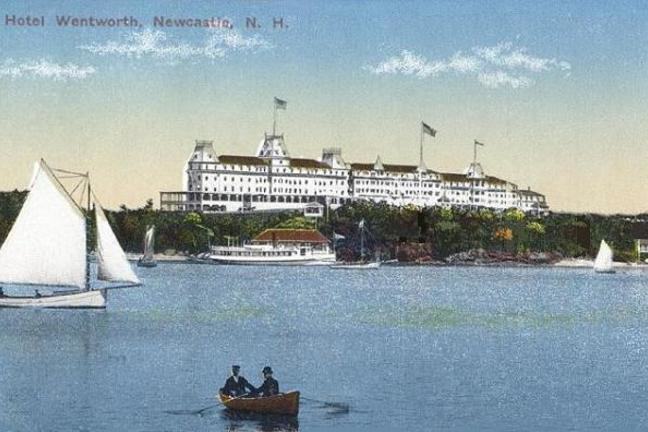 What could the bucolic lake in New England, USA, pictured above, possibly have to do with the fate of Korean sovereignty and the order among nations in East Asia? It was at the Hotel Wentworth in Portmouth, New Hampshire, that Korea’s fate as a Japanese colony was effectively sealed, and China’s exclusive hegemony over the peninsula severed for good.

China’s protective grip had already been pried loose in Article One of the Treaty of Shimonoseki (1895) insisting on Korea’s full independence. The Qing Empire’s status only slipped further still when an eight nation army marched on Beijing to punish the Empress Dowager’s government for supporting an anti-foreign rebel movement known as the Boxers. In one of history’s first joint East-West military operations, Japan joined American, Austro-Hungarian, British, French, German, Italian and Russian soldiers in taking turns parading through the sacred sites of imperial power in Beijing. Korea could hardly look west to the Qing for a reliable security guarantee.

Meanwhile Japan was not content to leave Korea in a peaceful state of “autonomy”. Rather, the independence attained at Shimonoseki was but a transitional stage from Chinese suzerain to Japanese colony. And with their triumphant, if costly, victory of Russia in the Russo-Japanese War of 1904-05, Meiji’s expansionists now imagined carving out a continental empire that would stretch from the Korean Peninsula into the Manchurian heartland. One of the principal aims of the war against Tsarist Russia was to reverse the Triple Intervention of 1895, and acquire the hold on southern Manchuria that Japan’s military felt that had won far and square with their victory over the Qing.

Curiously, the massive pitched battles on the steppe in which Japanese artillery and infantry pushed back mighty Russia, along with decisive naval victories in the Yellow Sea and Tsushima Straits, made Japan the envy, and hope, of Asia. As Pankaj Mishra points out in the opening of his fascinating book Ruins of Empire, Japan’s victory electrified Asian leaders from Sun Yat-sen to Mahatma Gandhi. But for Korea, the war meant more Japanese troops pouring into Incheon and marching north through what was once their Hermit Kingdom.

Where was Seoul to turn for help in loosening Japan’s tightening clutch? The Qing was in no state to counterbalance on Korea’s behalf, as the Manchu rulers desperately introduced a spate of “new policies” in attempt to stave off rebellion or collapse. Russia’s military weakness had been exposed by the defeat, while the Tsar faced a revolution by peasants, workers, students and soldiers at home. The French and Germans had only a superficial presence in northeast Asia. Britain was formally an ally of Japan, having signed a pact against Russia in 1902. In a 1905 renewal of the alliance, the British traded Japanese approval of “the jewel of the Crown”—the empire in India—in return for support of Japan’s colonization of Korea.

That left the United States—the “benevolent” great power with whom Korea should secure an alliance, Chinese diplomat Huang Zunxian had counseled back in 1880. The U.S. was broadening its reach into the western Pacific, having made possessions of the Philippines, Guam and Hawaiian islands, and saw Japan as a threat to its aspirations for dominance. But U.S. President Teddy Roosevelt was eager to broker peace between Russia and Japan (for which he won a Nobel Peace Prize, established just five years prior), and showed no real inclination to defend Korea.

The Japanese prime minister made his country’s plans to colonize Korea clear in conversation with Roosevelt’s secretary of war, and acknowledgment of Japan’s free hand in Korea constituted Article 2 of the Treaty (“The Imperial Russian Government, acknowledging that Japan possesses in Korea paramount political, military and economical interests engages neither to obstruct nor interfere with measures for guidance, protection and control which the Imperial Government of Japan may find necessary to take in Korea”).

With the other whales chased away, all that was left was for Japan to eat the shrimp. Two months after signing the Portsmouth Treaty in the Hotel Wentworth, Japan forced the Korean government to surrender basic elements of sovereignty, and disarm what was left of their military. In 1910, Japan would complete the colonization process with a formal annexation treaty.