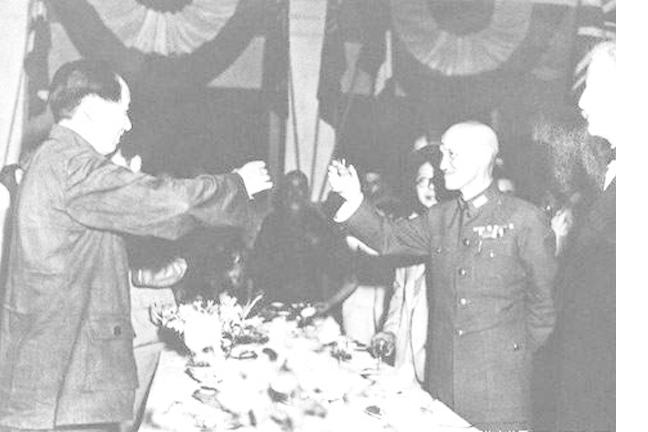 Mao Zedong and Chiang Kai-Shek toast each other at a banquet held in Chongqing City, China, 1945.

When the quivering voice of Emperor Hirohito came crackling through national radio broadcast on announcing Japan’s surrender on August 14, 1945, it came as a shock to the Japanese and surprise to the Americans, who had been locked in battle across the Pacific Ocean. But to Chinese, who had been engaged in full-scale military resistance against Japan since the invasion of Manchuria on September 18, 1931, and the Koreans, occupied since 1895 and colonized since 1910, it was an even more stunning and sudden turn of events. No one was really prepared for what came next, and a scramble to define the future map of East Asia erupted.

In China, the question was who would rule now that the Japanese dagger was removed from the throats of Mao Zedong and Chiang Kai-shek alike. Mao’s Communists and Chiang’s Nationalists staged an on-again off-again “United Front”—a policy of cooperation between the two rival parties that dated to Sun Yat-sen, and gained new meaning in the face of Japanese aggression. But neither Mao nor Chiang were true believers in the concept. Chiang had wanted to eliminate the scourge of Communism since 1927, when he broke the first United Front by unleashing Shanghai’s formidable mafia in a bacchanalia of violence against communists, labor activists, and leftists. He tried again to destroy the CCP for good during the encirclement campaigns against communist bases, known as Soviets, of the 1930s, which Mao’s tiny band of followers barely survived by taking their Long March to Yan’an.

Mao for his part used the United Front posture as a ploy to sustain the CCP’s existence in the face of the larger Nationalist Party. In terms of who did the actually United Front fighting against the Japanese, historians like Rana Mitter, in his superb new book Forgotten Ally, give Chiang the credit for committing troops that bogged down a million Japanese soldiers. But Mao was a more skillful propagandist than Chiang, and appeared to many both inside China and without (including American observers) to be more focused on countering Japan, as compared with Chiang who seemed obsessed with the Communists.

As captured in the grainy photograph of Mao and Chiang toasting their nation’s future, when liberation suddenly came in August 1945 both sides pretended to be committed to multi-party democracy. But this last United Front was itself a PR front, behind which loomed the reality of Chiang’s Nationalist forces and Mao’s Red Army frantically preparing for civil war. Curiously, neither of the Great Powers took a clear side. Stalin had doubts about Mao, who he saw as a potential rival to Soviet dominance over international communism, and sent signals he might be just as happy with an ally in Chiang. The Americans meanwhile had serious doubts about Chiang, given his antipathy to Western imperialism and fascist tendencies. US observers on the ground were impressed by Mao’s disciplined, idealistic camp at Yan’an, and predicted the smaller Communists would end up defeating the corrupt, demoralized Nationalists. As a result, Moscow and Washington both ended up in a passive role, watching as the civil war spread in magnitude and velocity, leading to the Communists dramatic victory by expelling the last 2 million dedicated Nationalist Party followers to the island of Taiwan, recently recovered from Japanese control.

On October 1st, 1949, Mao ascended the balustrade overlooking Tiananmen Square to signify the establishment of the People’s Republic of China. Until then, Mao and his communist faithful had operated their own Soviet bubbles within the Nationalist-led Republic of China. But now the tables had turned, and the Communist Party was in command of the state. There was one exception of course—the bubble of Taiwan, which became a “renegade province” rightfully belonging to the PRC in the eyes of Beijing. Chiang Kai-shek meanwhile insisted his Republic remained the legitimate government for the entire Chinese people, and would await the change to take back the mainland by force if necessary.

Mao had waited to declare a Communist state until he had won the civil war. The sequence of events, as you will learn in the next step, worked in reverse on Korea, equally unprepared for liberation.