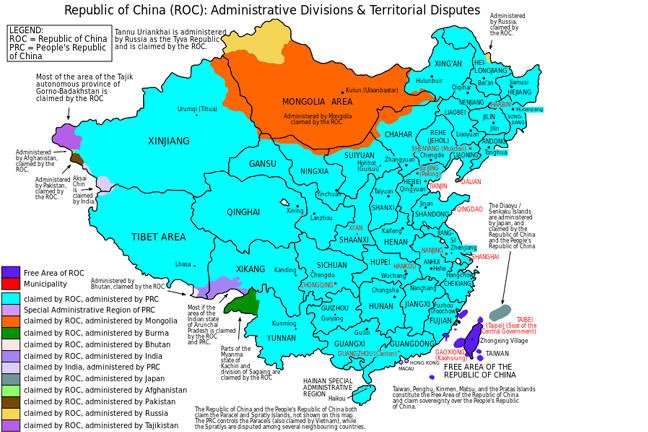 Administrative devisions and territory disputes in Republic of China (Taiwan)

The island of Taiwan was for centuries on the frontier of what it meant to be Chinese. Only notionally a part of the Ming Dynasty, which exerted no real administrative authority over the island, migration from the mainland increased steadily, and Chinese supplemented the native indigenous population. Then a new wave of foreigners started washing up on Taiwan’s shores—first Portuguese, then Spanairds, finally the Dutch, who colonized the island as best they could in the early 16th century. In the chaos after the Ming Dynasty’s collapse, the wealthy Zheng merchant family made Taiwan their base of operations in armed resistance against the Manchu conquerors, but in 1683, a Qing armada finally put the Zheng followers to the sword and made Taiwan an appendage of Fujian Province, and by extension part of the Qing Empire.

Two centuries later the Qing belatedly made Taiwan into a province, in a vain attempt to strengthen their territorial claims, but just a decade later, the Treaty of Shimonoseki ending the Sino-Japanese War put Taiwan under the sovereignty of yet another ruler from afar. Japanese rule was relatively light-handed in Taiwan, and for 50 years Taiwanese learned to adapt their Chinese and aboriginal roots to Japanese colonial ways.

Suddenly in 1945 Taiwan was “liberated”. The island reverted to mainland Chinese control, meaning, at that point, the Nationalist Party-led Republic of China. It was not an easy transition, and in early 1947 resentment by native Taiwanese exploded into public protests against the new government, which brutally suppressed any and all opposition in what became known as the February 28th incident. The displacement only got worse when two million Nationalist Party elites, including Generalissimo Chiang Kai-shek himself, exiled themselves to the Beautiful Island by the end of 1949, having been driven from the mainland by Mao’s Red Army.

Bear in mind that at the time when Kim Il Sung asked Mao’s blessing to launch his reunification invasion of the south, the imperfect denouement of the Chinese civil war was only months in the past. Indeed, it was not yet past—both Mao and Chiang were grimly determined to truly end the civil war by conquering the other. The Republic of China created a fictional national assembly with representation from each province in the mainland, and maps published in Taibei froze territorial time at 1948, as if there was no such thing as the PRC.

A principal objection among Chinese Communist leaders to Mao’s support of Kim’s invasion, not to mention the decision to become a party to the war in October, was the implications it would have on China’s own unification. The PLA for the time being lacked the amphibious capabilities to invade Taiwan, but expeditions to capture Hainan and Zhoushan islands proved successful practice runs. Committing to a land war in Korea would set back the build-up needed for a marine war to capture Taiwan.

And then there was the question of the American presence in the western Pacific. Washington had serious misgivings about Chiang—doyen of Korean War historians Bruce Cumings points out in The Korean War: A History that the very weekend of Kim’s invasion, US officials were engaged in secret talks with Chinese plotting a coup against Chiang in Taiwan. But if Mao’s calculation was that conflict in Korea would scare the Americans away from Asia, or force them to shift defense commitments from the Republic of China to the Republic of Korea, he was sorely mistaken.

Quite the contrary, the brash invasion in Korea was seen as the beginning of a Sino-Soviet Communist power play in the Far East, and the US thus strengthened its security umbrella protecting Taiwan. As an immediate response to the invasion, President Truman reversed his previous ambivalence about defending the ROC, and publicly redefined Taiwan’s security as inseparable from America’s. “The occupation of Formosa by Communist forces would be a direct threat to the security of the Pacific area and to United States forces performing their lawful and necessary functions in that area,” Truman declared, and backed his words up in deed by sending the US Seventh Fleet into the Taiwan Straits.

Economists, masters of the dismal science, like to point out that every opportunity comes at a cost. For Mao, the Korean War was an opportunity to stand up to imperialism and fight the Americans to a standstill, while re-establishing a buffer against US-backed South Korea and Japan. But the costs included sapping PLA strength and triggering a US pivot to the western Pacific, thereby making the odds of ending the civil war and absorbing the “renegade province” of Taiwan that much harder.