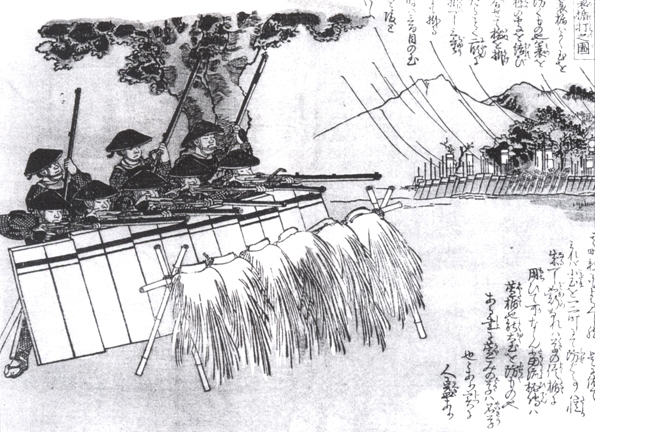 © A woodblock print from an unknown Japanese book. [Public domain], via Wikimedia Commons

In late May, 1592, Japanese forces landed virtually unopposed at Busan, on the southeastern tip of the Korean Peninsula. Thus inauspiciously commenced what rapidly developed into a Japanese rout of Korean resistance, as Hideyoshi’s armies marched inexorably northward toward their target, the Great Ming Empire. By early June, Japanese troops forded the Han River and occupied the abandoned capital of Seoul (then known as Hanseong). The 1st and 3rd divisions pushed further north and laid siege to the great northern city of Pyongyang. Meanwhile Japan’s 2nd division tore its way up the east coast, even crossing the border into Manchuria.

How were Hideyoshi’s men able to slice their way through Korea with such apparent ease? Military technology provides at least part of the answer, as Black Dragon War historians like Samuel Hawley have pointed out. Japan’s invasion force combined the martial skill and discipline of famed samurai warriors with something more mundane yet also more lethal—armed infantrymen. Portuguese firearms, known as the arquebus, reached the Japanese island of Tanegashima in the mid-1500s, and was soon being mass manufactured for use among warring parties in Japan, who brought them along for the invasion of Korea.

That new arms technology had been in such demand draws attention to another key factor in Japan’s military success. As the saying goes, practice makes perfect, and if Japanese had practice at one thing over the past century, it had been warfare. Indeed, the period of Japanese history from 1467 right up to the invasion of Korea is known in Japanese as “sengoku jidai”—the era of warring states. Japanese generals and soldiers arrived in Busan hardened by decades of combat, and perhaps relieved to be fighting a “foreign” enemy for a change.

By contrast, Korea’s relative tranquility was part of its undoing. As wartime prime minister Yu Songnyong lamented in his fascinating memoirs, titled Book of Corrections and translated by Choi Byong-hyon: “Our country has enjoyed peace for so long that our soldiers have become weak and timid” [Corrections, 42]. The Joseon dynasty had already ruled for 200 years, and given the close alliance with Asia’s superpower, Ming China, Korea’s position seemed secure. The sense of security bred complacency.

Once Japan’s invasion arrived, underlying weaknesses in the Joseon system further hampered the defense effort. Paralyzing factionalism divided competing groups of Korea’s ruling Confucian elites, who shared little except an equally harmful disdain for military affairs. Korean resistance wilted in the face of Japan’s determined assault. As Prime Minister Yu described it, “They [the Japanese] beat their drums and behaved as they pleased. Day and night they marched several hundred li to the north at full speed, trampling down the land without defenders; they never ran into anyone who could confront and slow them down” [Corrections, 69]. The Korean king fled his palace in Seoul, and waited Chinese rescue from the border town of Uiju, on the threshold of exile.

Had Japan dominated the sea the way they did the land, it is entirely conceivable that Hideyoshi’s men might have crossed into Ming territory. But as the next steps will explain, naval power was the Achilles heel in Japan formidable war machine. The naval delay gave the Ming government time to reinforce a small expeditionary force with a real army.

Ming troops finally arrived in force in January 1593, and pushed Japan’s overstretched occupation army out of their northern stronghold of Pyongyang. The Ming army brought cutting-edge weaponry of their own, countering Japan’s arquebus infantry with devastating siege artillery adapted from Portuguese and Dutch cannon. But Chinese troops, and the Korean population obliged to help provision them, faced a logistical conundrum of their own as the supply lines stretched down the peninsula, and Japanese resistance was stiff even as they withdrew. By the spring of 1594, Ming forces penned Japanese troops in at their original landing, in the region around Pusan, and stalemate set in as negotiations ground along.