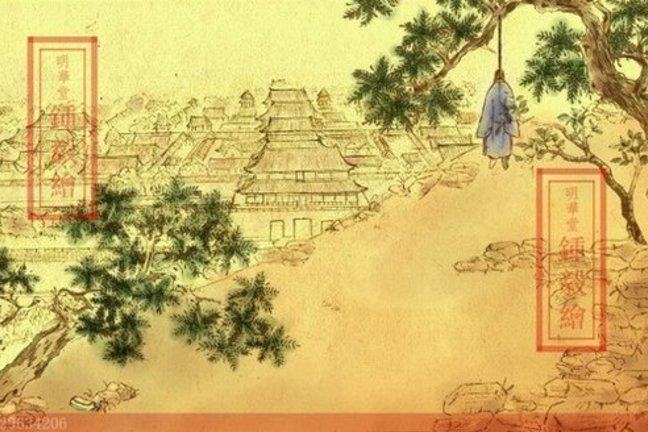 Chongzhen, the last emperor of Ming dynasty, hangs himself in Meishan park behind the Forbidden City

After years of stalemate on the battlefield and protracted, fruitless negotiations, the ailing Hideyoshi made a bold attempt to break the logjam by sending a second massive invasion force to Korea in the spring of 1597. Historians debate whether Hideyoshi sincerely believed he could reach Beijing the second time around. His war aims may have shifted to something less ambitious yet more brutal—massacres that today would qualify as “crimes against humanity” were an explicit part of the war plan for the second assault. Hideyoshi rewarded commanders based on the number of severed Korean noses they shipped back to Japan, where they were housed in a shrine, and tens of thousands of Korean men and women—elite and commoner alike—were forcibly taken back to Japan as living booty.

Whatever his precise goals, Hideyoshi mustered an equally large invasion force of somewhere around 140,000 men—a testament to Japan’s formidable military might. As ships landed in Pusan, a second war commenced that would be like a replay of the first, but moving in fast-forward. Fresh troops enjoyed initial victories on land, but faced sustained Korean guerrilla resistance—hardened by years of occupation—and Chinese reinforcements heading slowly but steadily by land and sea. Once again, it was a clash of technology, tactics, and logistics. The initial advantage was with the invaders, but time was on the side of those playing defense.

Hideyoshi tried to correct for the flaw in the 1592 invasion plan by sending a stronger naval detachment this time around to open up the critical Yellow Sea supply line. With Korea’s acclaimed Admiral Yi Sun-shin cast out of power due to factional wrangling, Japanese ships delivered a devastating initial blow to the disorganized Korean naval resistance. The Korean court hastily recalled Admiral Yi to command over what was left of the southwestern fleet. In November 1597, Yi used his knowledge of the treacherous west coast to decimate a Japanese armada of over 100 ships with barely a dozen of his own. The Battle of the Myeongnyang Straits sealed Yi’s fate as one of the great naval commanders in Asian history, and once again denied Hideyoshi access to China’s northern lake, the Yellow Sea. Yi was not destined to enjoy the fruits of victory, however. At the last major naval clash of the war, the Battle of Noryang Straits, he was shot through the chest by a Japanese bullet and died on his ship.

By the time Admiral took his last bullet, an even more fateful death had essentially ended the war: Hideyoshi Toyotomi died in September. The grand vision of expanding onto the Asian continent was driven by the overleaping ambition of Hideyoshi himself. Once he died, Japan’s new leaders began withdrawing troops, and abandoned Hideyoshi’s back-up position whereby the Ming would recognize Japanese control over the southern half of the Korean Peninsula. There was no official peace treaty signed to end the war, no reparations paid by either side, no proposals for ways to avoid another such conflict.

With the withdrawal of all Japanese forces from Korea, the Black Dragon War in the end would seem to be a victory for China. But was it? The resources invested in defending Joseon put a crippling strain on the Ming fisc. This had been the argument of “doves” in the Ming court all along—that the empire could scarcely afford to fight a full-scale war abroad given the dire needs at home. The dovish argument could seem to be born out by the fact that the Ming entered a period of unraveling in the wake of victory in Korea. Unable to placate or pacify tribal peoples living north of the Great Wall, the Ming eventually fell to rebels from within. The last Ming emperor hung himself from a tree just outside the gates of the Forbidden City as the rebel army of Li Zicheng made its way to occupy Beijing.

On the other hand, it could be asked whether the Wanli Emperor really had a choice but to defend Korea and repel the Japanese? Might not the Ming have fallen even earlier were it not for victory in the Black Dragon War? Instead of a conquest dynasty established by Manchurian invaders, who would arrive in Beijing in 1644 to make China part of their Qing Dynasty, might it not have been a Japanese conquest dynasty that ruled Chinese for the subsequent centuries? Historians are wary of pursuing counterfactual questions like these too far, since the facts of the past are complex enough, without imagining alternate series of facts. But it is worth asking whether China’s victory in the Black Dragon War was pyrrhic or not.