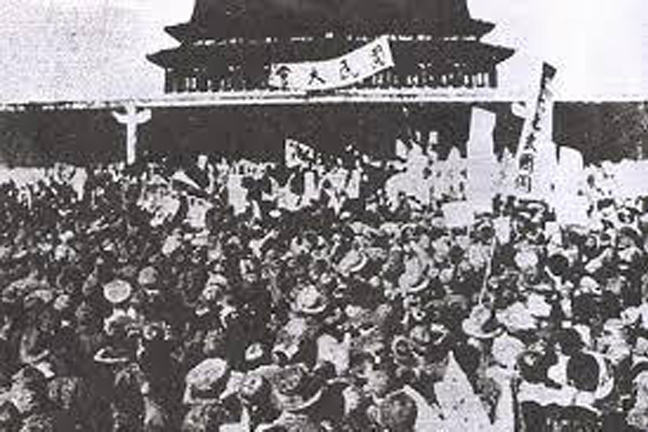 Chinese protestors march against the Treaty of Versailles (May 4, 1919)

There are events in a nation’s history that are considered so momentous—for good or ill—that merely the date alone suffices as reference. As an American, when I hear July 4th, I automatically think the year is 1776 and I am in Philadelphia at the signing of the Declaration of Independence. If I hear September 11th, I am in New York, the year is 2001, and the Twin Towers are falling. You can probably think of examples from your own country.

In modern Korean history, March 1st is such a date, and in China so is May 4th. The two days are in fact intimately connected, taking us back to the year 1919, and a moment of synchronicity in the struggles of Chinese and Koreans to find their sovereign place in the global order emerging out of World War One.

That spring, the world’s diplomats converged on France for the Paris Peace Talks, where U.S. President Woodrow Wilson’s ideas about “self determination” and “making the world safe for democracy” raised hopes for a new liberal order. Korean political elites, chafing under the yoke of Japanese rule, saw in Paris the possibility of regaining statehood and dignity.

On March 1st, political activists and students gathered at Tagpol Park in downtown Seoul to proclaim a Declaration of Independence, triggering police crackdowns that only drew more people into the streets. As Harvard University historian Erez Manela points out in his illuminating book, The Wilsonian Moment, Korean independence leaders carefully coordinated their independence proclamation in order to influence the debate in Paris over the fate not just of Europe, but imperial possessions around the globe.

As the March 1st demonstrations roiled the Peninsula, exiled Korean patriots met in the French quarter of Shanghai to set up a provisional government in exile of the Korean Republic (Taehan minguk), ancestor of today’s South Korean state, the Republic of Korea. Ironically, two years later the Chinese Communist Party would have its founding meeting in the same foreign concession in Shanghai.

The new Korean republic-in-exile dispatched Kim Gyu-sik to travel secretly to Paris and lobby for Korean sovereignty. Kim, a student of Yonsei University founder Horace Underwood, disguised himself as Chinese to make the trip, but was refused admittance to the talks. Korean nationalists were coming up against the brutal reality that one of the victors in World War One was their nemesis and occupier, Japan, which provided support to the Allied powers in Europe in return for promises of post-war recognition of Japan’s sphere of influence in Asia.

Awareness of this realpolitik reality behind the liberal rhetoric in Paris next hit China like a thunderbolt, as news leaked home (via a telegram sent by Liang Qichao, a non-government Chinese observer at the talks) that Japan had been promised Germany’s concessions on the Shandong Peninsula as thanks for joining the war effort. Even worse, the weak, corrupt, and cash-starved military government in Beijing had looked the other way, dependent as it was on Japanese loans. Outraged Chinese students gathered in front of Tiananmen on May 1st to protest the predatory claims of Japan, the callous hypocrisy of the West, and, worst of all, the traitorous weakness of their own government. Their march triggered broader protests, just like March 1st in Korea, and became an enduring symbol of nationalist hopes and fears.