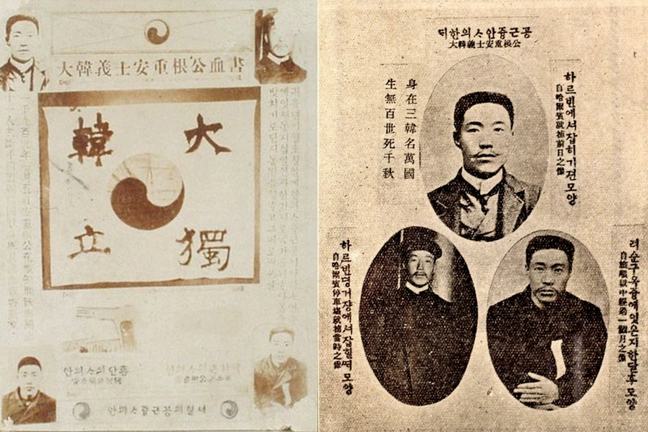 © The Independence Hall of Korea

The tragic hero Jing Ke is one of the most memorable figures in the greatest masterpiece of Chinese historical writing, Records of the Grand Historian by Sima Qian. A scholarly swordmaster, Jing Ke was from a small state that had been swallowed up by the rising power of the Qin kingdom– soon to be Qin empire. Ending up in a neighboring kingdom, also threatened by Qin’s ascent, Jing Ke agreed to a desperate mission to kill the king of Qin. He died in the failed assassination attempt, and the king went on to become the infamous First Emperor of the Qin Dynasty, reunifier of China, known today for having had an entire army of terracotta soldiers buried alongside him. Although Jing Ke’s mission failed, ancient historian Sima Qian gave him immortality in his artful telling of his life, and made him an icon of resistance all the way into the present (a number of blockbuster films based on Jing Ke have come out in recent years).

As Peking University’s Wang Yuanzhou pointed out in a fascinating lecture delivered a few years back in Seoul (see related link), when Chinese read the news in 1909 that a Korean patriot had shot and killed the famous Japanese minister Ito Hirobumi at the railway station in Harbin, they celebrated his heroism as that of a modern-day Jing Ke. Ito Hirobumi had served as the first Prime Minister of Meiji Japan and first Governor General of colonial Korea; he was the architect of Japan’s modern constitution and leading figure in foreign relations. Ito was everything for Meiji Japan that Li Hongzhang had wanted but failed to be for Qing China. Li, you will recall, was nearly killed by an assassin’s bullet on his visit to Japan to sign the Treaty of Shimonoseki in 1894. Ito, on a visit to Manchuria for discussions with the Russians, was less fortunate.

The assassin’s name was An Jung-geun, an independence activist who fled Korea for Vladivostok, in the Russian Far East, in 1907. There he attempted to organize armed resistance against Japan, but decided upon the symbolic act of killing Ito. An gave 15 reasons Ito deserved death, a laundry list of Japan’s imperialist crimes against Korea, along with the broader charge that Ito was guilty of destroying peace in East Asia. An was found guilty of murder by a Japanese court in Port Arthur and hung like a common criminal on March 26, 1910.

In prison, facing death, An composed his last political will and testament, an unfinished treatise On Peace in East Asia. It is a remarkable document, brimming with hope for something you might least expect out of a Korean nationalist—that Japan would provide leadership for the rest of East Asia. An pines for a Japan that renounces its growing imperialist tendencies and instead takes it rightful place as the new center of East Asian modernity and civilization. An hoped his sacrifice would serve as a wake-up call not only to Korean patriots, but also to the Japanese public, so that their government would fulfill the hopes of reformers like An.

In Chinese eyes, likening An Jung-geun to Jing Ke was not only a tribute to his heroism, but also an implicit recognition of the futility of his sacrifice. Wang Yuanzhou for example points out that Liang Qichao put it in rather harsher terms, commenting, “An Jung-geun’s courage is endearing but his stupidity is to be pitied.” The shots he fired at the Harbin platform may have inspired fellow Koreans, but Ito’s assassination only strengthened the hand of hardliners in Tokyo, who moved forward with annexation of Korea in the wake of An’s execution. In that sense, it could be said that An’s daring act backfired. Had An lived, he would have seen his dream of a new East Asian Peace led by enlightened Japan slowly unfold as the nightmare of Japan’s East Asian Co-Prosperity Sphere, forced upon the region by an expansionist Japan.