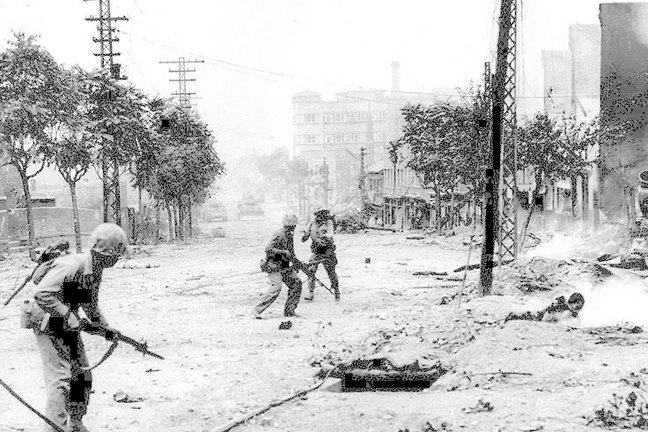 U.S. Marines engaged in urban warfare during the battle for Seoul in late September 1950.

On the early morning of June 25, 1950, North Korean forces broke through the South Korean line along the 38th parallel in a premeditated invasion of the South. Although firefights and even larger battles had broken out before, this was something different. And although South Korean leaders were equally keep on ending on reunifying the Peninsula by force of arms, Pyongyang in the end was the first to act.

Driving Soviet tanks, battle-hardened by guerrilla warfare, the Korean People’s Army (KPA) steamrolled South Korean defenses, unleashing mayhem. War correspondent for the New York Herald Tribune Marguerite Higgins flew from Tokyo on day one to get the scoop on what she thought was the beginning of World War III. Landing at Gimpo air field west of the capital, she would describe the view from her jeep in her 1951 book War in Korea: “The road to Seoul was crowded with refugees. There were hundreds of Korean women with babies bound papoose-style to their backs and huge bundles on their heads. There were scores of trucks, elaborately camouflaged with branches. South Korean soldiers in jeeps and on horses were streaming in both directions. It was a moving and rather terrifying experience, there on that rainy road to Seoul, to have the crowds cheer and wave as our little caravan of Americans went by.” (Higgins, 19)

Within three days, the capital city of Seoul had fallen, and any Southerner with a uniform or government position was fleeing south. One of the future heroes of the war, Paik Sun Yup, left a vivid account of the chaos of June in his book From Busan to Panmunjeom, as what remained of the ROK army collapsed back on a narrow cut of land comprising the southwest corner of the Peninsula, around the port city of Busan. “I stood at least on the bank of the Naktong River. I had fought north of Seoul, withdrawn across the Han, fallen back two hundred miles in a tortuous version of the long march, and at last reached the Naktong. There was no more room to withdraw.” (Paik, 28)

In a strange irony of history, the Busan Perimeter was roughly the same patch of land held by Hideyoshi’s force between the first invasion of 1592 and second wave in 1597. Now, centuries later, it was a mix of South Koreans and Americans trying to hold the perimeter against the North Korean wave. ROK soldiers defended a 55 mile line running north-south, while the US 8th Army held down a 75 mile border cutting east-west. Both sides fought tenaciously in the summer heat—field artillery, tank operations, hand-to-hand combat—as it was make or break. Finally at the end of the August, reinforcements from the US 2nd Division and UK 27th Brigade gave second life to the perimeter. The KPA staged another major offensive in early September, and pushing the perimeter back to the point where it seemed it might cave in. The line held, but would not last much longer.