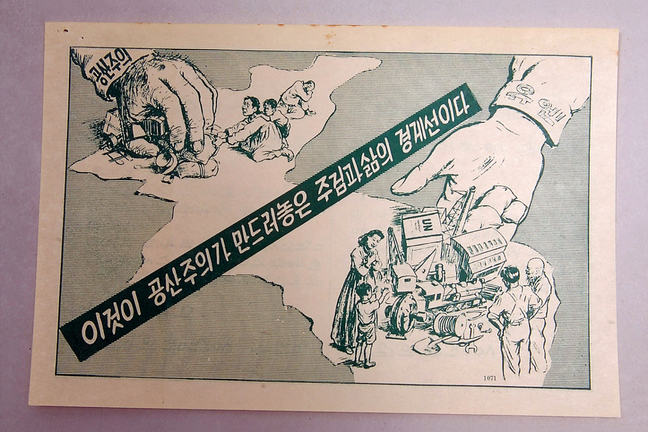 Propaganda posters during Korean War. "This is a line of life and death that communists draw. "

Patriotic Koreans stress the fact that their peninsula was a unified country thousands of years ago. In an excess of patriotism, the historicity of antiquity gets stretched to mythic proportions, as on every October 3rd in South Korea when the birth of the legendary Dangun in 2333BC is celebrated as National Foundation Day.

In reality, the history of the Korean Peninsula, like that of the place we call “China”, contains not only epochs of autonomy and unity, but also periods of division, as well as eras of subjugation. During the first seven centuries of the common era, the Peninsula was home to three distinct and independent kingdoms—Gogureyo in the north, Baekje in the southwest, and Silla in the southeast. Powerful regional identities persist, and manifest on many levels even today—in food, dialect, personality types, even voting patterns.

The idea of a unified peninsula is not, however, merely a construct and projection of modern Korean nationalism. Two powerful dynasties, Goryo and Joseon, kept most of today’s “Korea” (north and south) unified from the 10th to the 20th century. One partial interruption to the millennium of autonomy and unity came with the rise of the Mongol Yuan empire of Genghis and Kublai Khan, which through successive invasions in the 13th century forced the Goryo into fealty. And then, as you learned last week, Japan, another foreign conquest power, arose in the late 19th century, and snapped the streak of Korean independence by ending the Joseon Dynasty and annexing the peninsula a colony of the Japanese Empire.

Koreans sometimes point out, in a wry, anguished way, the irony that their territory came out of the World War II divided, when Japan, the defeated aggressors, remained unified. Division was a kind of gentleman’s agreement between the two powers who staggered out from the second world war standing the tallest—the US and USSR.

The two dynamic phases of the Korean War, Kim Il Sung’s drive to the Busan Perimeter, and Douglas MacArthur’s push to the Yalu River, were efforts to erase the artificial cleavage and make Korea whole again. Both efforts failed, at great human cost to all involved. Yet both efforts came very close to their goal, leaving each side with a sense of victory snatched from their fingertips at the last moment, and perhaps a residual hope that “final victory” was attainable, in due course.

To this day, Seoul and Pyongyang adamantly insist there is only one ultimate future for the Korean Peninsula, and that is reunification. But the legacy of the Korean War was to seal the great power compromise of 1945 in three years of blood, not just Korean blood, but Chinese, American and allied nation blood.