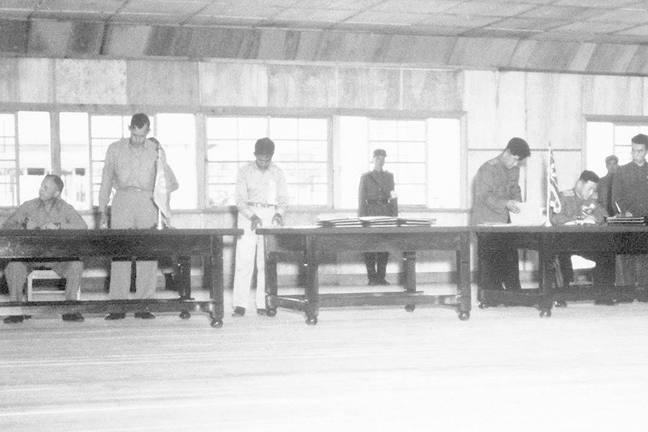 The massive influx of Chinese reinforcements in late October 1950 reversed the course of the war for the second time, and after bloody fighting in freezing conditions, Sino-Korean forces pushed the UN coalition below the 38th parallel, even recapturing Seoul in January 1951. But their strength started to run out, and when the Americans and South Koreans staged a counter-offensive they won Seoul back for the South. Like a pendulum coming to a stop, in the spring of 1951 the US-Korean army made one last push above the parallel, after which the Sino-Korean army mounted its last big offensive. The pendulum ball came to rest back where it had all begun a year prior.

As the land war ground to a standstill along the original line of division, the US Navy employed a panoply of sea war stratagems from the relative safety of their untouchable armadas in the Yellow Sea and East Sea. Aircraft carrier bombing raids pummeled the North Korean interior, seaborne artillery bombardment and siege warfare ravaged coastal cities, and a shipping blockade and fishing ban strangled the economy. The jagged coast and offshore islands of the Yellow Sea turned into training grounds and supply depots for partisan infiltration and covert operations.

Yet even with command of both seas, the full force of the world’s greatest navy failed to break North Korean capacity or will to fight. American fliers’ dominance of the skies over North Korea likewise failed to tip the scales of the war, although the population below suffered a degree of airborne destruction worthy of W.G. Sebald. Naval and air power could not dislodge the Sino-Korean infantry and artillery from the dividing line. Like two wrestlers locked in a deathhold, the Chinese-backed northern army and US-backed southern army fought a war without movement.

The big power “funders” of the war on each side recognized that decisive victory on the battlefield would probably be impossible. When the Soviets hinted at cease-fire talks in June 1951, the Americans jumped on the chance and armistice talks commenced at the border city of Gaeseong. The next two years of armistice negotiation foreshadowed Washington’s long vexation with Korean diplomacy and vice versa, as both sides engaged in grandstanding, brinkmanship, delaying tactics, litigiousness and duplicity.

Formally, the northern delegation was led by a KPA lieutenant general, but the Americans assumed that the Chinese representative was the real decider. The southern side was formally speaking a United Nations delegation, but “UN” was not much more than a label stitched over US military uniforms. The UN side took its orders from Washington, but the State Department instructed US military commanders to negotiate in their place because Washington did not want to imply political recognition of the DPRK—a point of pride for the US government to this day.

The elephant in the room at Gaeseong was the Republic of Korea. Beijing may have possessed the ultimate decision-making power for the north, but at least the two allies maintained a fiction of the North Koreans heading the negotiations. Washington’s fiction was to put the United Nations in the room, but the South Koreans were not there even in pretense. Indeed, South Korean leader Syngman Rhee not only refused to sign the Armistice, he made efforts in the final stages of negotiation to derail the deal. Kim Il Sung and Peng Dehuai, not without reason, demanded of the US commander, “Is the United Nations Command able to control the South Korean government and army? If not, does the armistice in Korea include the Syngman Rhee clique? If it is not included, what assurance is there for the implementation of the Armistice Agreement on the part of South Korea” (William Vatcher, Panmunjom: The Story of the Korean Military Armistice Negotiations, 195-6). President Rhee finally capitulated to allowing the Americans to sign the Armistice in return for a formal defense alliance with the USA. To this day, the ROK has never signed the Armistice, which applies only via the authority of the UN Command.

The Armistice was intended as an agreement between military commanders to cease action for at least a few months until their civilian leaders met to “settle through negotiation the questions of the withdrawal of all foreign forces from Korea, the peaceful settlement of the Korean questions, etc.” Over 60 years later, Koreans on both sides of the 38th parallel are still waiting for that “peaceful settlement.”