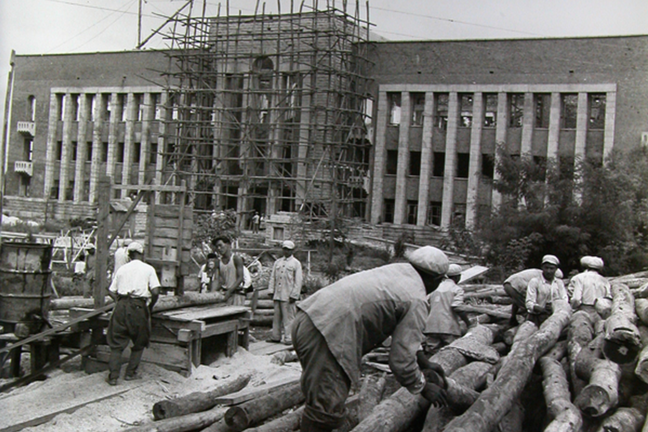 North Korea was left completely leveled by the three years of war from June 1950 to July 1953. If you get the chance to visit the Victorious Fatherland Liberation War museum in Pyongyang, your tour guide will almost surely mention the number of bombs dropped on their capital city (over 400,000). The US military engaged in aerial bombardment, including heavy doses of napalm incendiaries, on a scale so extensive that field commanders complained there were no meaningful targets left to hit above ground. The total war from the skies pushed Chinese and North Koreans underground for safety, and engendered a “bunker mentality” that endured as an almost permanent feature of the North Korean state.

When a fragile peace was finally declared in July 1953, North Koreans were able to crawl out of their holes and begin the reconstruction of their country. To support this daunting enterprise of rebuilding, the newly risen socialist bloc countries leapt to Korea’s aid. Columbia University historian Charles Armstrong’s essay for the Asia-Pacific Journal (see related file) describes how not only neighboring USSR and PRC helped out, by even far-off Eastern European countries did their part to fulfill the “from each according to his ability, to each according to his need” ideal of socialist internationalism. In his masterful book, Tyranny of the Weak: North Korea and the World, 1950-1992, Armstrong tells more such fables of the reconstruction– for example, how the pre-war industrial center on the east coast, the city of Hamhung, was virtually adopted by the German Democratic Republic (East Germany), which poured aid into Hamhung’s resuscitation.

Many countries joined in this early (and evanescent) experiment in ‘fraternal socialism,’ with Moscow writing the biggest checks. But China carried the heaviest load, literally, in North Korea’s reconstruction, by converting hundreds of thousands of Chinese People’s Volunteers (CPV) soldiers in a labor force of the kind desperately needed in a war-torn country. Back home China after 1953 was at last enjoying a modest peace dividend, and basic socio-economic indicators such as life expectancy, infant mortality, and educational level were finally improving. But the PRC was by no means a wealthy country. The contributions of CPV troops, and other forms of assistance, strengthened the post-war bond between the PRC and DPRK. With help from Beijing, Moscow, and the rest of the bloc, North Korea reaped the benefits of Soviet-style centralized planning to rebuild much of the industrial foundations originally laid during Japanese colonial rule. By the late 1950s, the North Korean economy was in decent shape.

In early 1958 Kim Il Sung and Mao Zedong came to a mutual agreement that it was time for the CPV to go home. In a briefing with the Soviet ambassador to Pyongyang, Kim argued that once Chinese troops withdrew, pressure would increase on US troops to leave the South, as had occurred a decade earlier when Soviets first left the North in 1948 followed by Americans pulling out of the South in 1949. If Kim really thought Chinese withdrawal would trigger US withdrawal, he had made a huge miscalculation. But, at least, the North Koreans got an ideological hammer with which to slam the South Korean government. Down to the present day, Pyongyang heaps scorn on Seoul as a running dog of the American imperialists, a puppet regime whose sovereignty is compromised by the presence of tens of thousands of foreign soldiers on their territory.