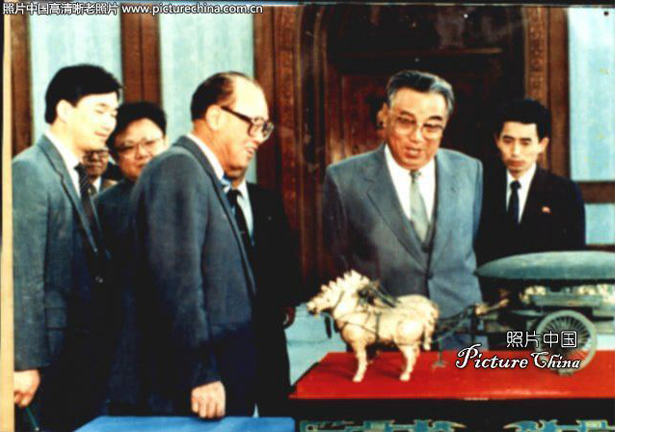 Chinese premier Zhao Ziyang paying a visit to Pyongyang, looking at the present he brought for Kim Il Sung

Bad time to go to Pyongyang

1989 was a momentous, watershed year for contemporary China, pitting millions of pro-democracy demonstrators, mostly students, against a stubborn Party leadership, many of whom where in their 70s and 80s. It culminated in what is known in the West as “the June 4th Tiananmen massacre”, and referred to within China simply as “6/4.” Curiously, even in this internal affair, which had nothing at all to do with North Korea, Kim Il Sung played a minor role.

First, a little background. Since the late 1970s, Deng Xiaoping’s economic reforms had proved a spectacular success among farmers in the countryside, but the transition after 1984 to reforming the industrial sector and urban economy proved much rockier for Party and people alike. Inflation and layoffs fueled discontent, particularly among college students, many of whom thought the economic problems were rooted in a more fundamental issue—a lack of democracy.

Disparate student protests were breaking out on campuses every year, leading up to the spring of 1989 when the demonstrations erupted on a nationwide level. The trigger was the death of former Party leader Hu Yaobang, whom Deng had tapped in the early 1980s to serve as CCP general secretary, and his presumptive heir as paramount leader. Hu was a hard-charging reformer, and not just on the economic—he was also much more political tolerant, liberal even, than many of his colleagues in the upper echelons of leadership. In 1987, Hu’s openness cost him his job. He was ignominiously dismissed as Party leader for failing to silence critical voices among youth and intellectuals.

Most people simply heard no more from or about Hu for the next two years—until the Party announced his death on April 15, 1989. Mourning former General Secretary Hu gave the regime’s critics an excuse to gather in spontaneous public expression of grief, and quickly galvanized into a political protest in everything but name.

In the two years since Hu was forced out of power, the mantle of reform had passed to the new General Secretary, Zhao Ziyang. The mourning-demonstrations put Zhao in the hot seat, since it was up to him to convince the protestors to be patient with the pace of reform while simultaneously fending off the Party’s old guard. Hu’s memorial service on April 22nd was electric with tension, as a huge crowd gathered in Tiananmen Square and three brave students melodramatically kowtowed on the steps outside the memorial hall where senior Party leaders gathered and tried to present them with a petition, echoing Confucian traditions of scholarly dissent. Hardliners began to call for more brutal methods to squash the movement, while Zhao insisted that with an open attitude and willingness to engage in dialogue, students would peaceably return to their dormitories.

The day after Hu’s memorial, General Secretary Zhao boarded a train bound for Pyongyang. He may have underestimated the danger of the situation he left behind—the determination of students and Party hardliners alike. Or perhaps he thought cancelling a pre-scheduled overseas trip would accentuate the sense of crisis. And then there is the question of his agenda in the DPRK—was there something important enough to discuss in Pyongyang that justified leaving Beijing despite the risk? The best explanation I have heard for Zhao’s agenda in North Korea was that Kim Il Sung had been waiting for an explanation of why Hu Yaobang was dismissed in the first place. Hu had accompanied Deng on a secret visit to North Korea in April 1982 and the returned on his own, in public, in 1985—both trips were important in signaling Chinese acceptance of Kim Jong Il (Armstrong, Tyranny of the Weak, 227). Zhao was belatedly traveling to Pyongyang as Deng’s envoy to explain the Hu affair in person to Kim.

If true, the irony could not be more bitter from Zhao’s perspective. Party hardliners, led by Premier Li Peng, took advantage of Zhao’s absence to convince Deng Xiaoping that the students were controlled by “bad elements” with “counter-revolutionary” motives, and that the movement’s real target was Deng himself. They persuaded Deng to sign off on a harsh editorial in the state-run People’s Daily that labeled the demonstrators as political criminals rather than patriotic youth. The April 26th editorial only inflamed the students, who marched en masse from their campuses to converge on Tiananmen Square and begin the occupation.

One can only imagine the anxiety in Zhao’s breast on that long train ride back to Beijing—even from the terse telegrams relayed by the PRC Embassy in Pyongyang, he would have known things were getting worse, not better, at home.

As the protests swelled in size and burned in ardor, Zhao tried to moderate the responses of the Party leadership. But he was playing a losing hand, as doubts spread over Zhao’s true loyalty. On May 19th, Zhao made an emotional visit to hunger striking students in the Square, delivering his famous line through a bullhorn, tears in his eyes, “Students, we came too late.” It was Zhao’s last public appearance; like Hu Yaobang, Zhao was stripped of high office and forced out of power.

The Tiananmen protests raged on even after the Party declared martial law and surrounded the city in army units. The protests continued even when Mikhail Gorbachev arrived to celebrate the end of the four-decade long Sino-Soviet split. In the West we call it the Tiananmen democracy movement, but in fact hundreds of cities had active demonstrations, and democracy was only one of the demands put forward by peaceful crowds who were upset about corruption, inflation, unemployment, and social injustice.

It all came to a terrifying end in the dark early morning hours of June 4th, as PLA troops rumbled through the streets of the capital toward their final object of clearing the Square. Hundreds, maybe thousands, died in the operation.

Zhao lived out his days at his home in downtown Beijing, never put on trial, yet denied his “political freedoms” and a normal life, and he died in 2005. But five years later, secret audio tapes he had recorded and smuggled to Hong Kong were published as the book Prisoner of the State: The Secret Journals of Zhao Ziyang, allowing Zhao to get in the last word.